It’ll be an All-Star rematch: Team LeBron vs. Team Giannis.

LeBron James of the Los Angeles Lakers and Giannis Antetokounmpo of the Milwaukee Bucks will be the captains for the NBA All-Star Game, just as they were last season. They earned the captaincies by being the top overall votegetters from the Western and Eastern Conferences, respectively.

The other starters for the Feb. 16 game in Chicago: Anthony Davis of the Los Angeles Lakers, Kawhi Leonard of the Los Angeles Clippers, Luka Doncic of the Dallas Mavericks, James Harden of the Houston Rockets, Pascal Siakam of the Toronto Raptors, Joel Embiid of the Philadelphia 76ers, Kemba Walker of the Boston Celtics and Trae Young of the Atlanta Hawks. 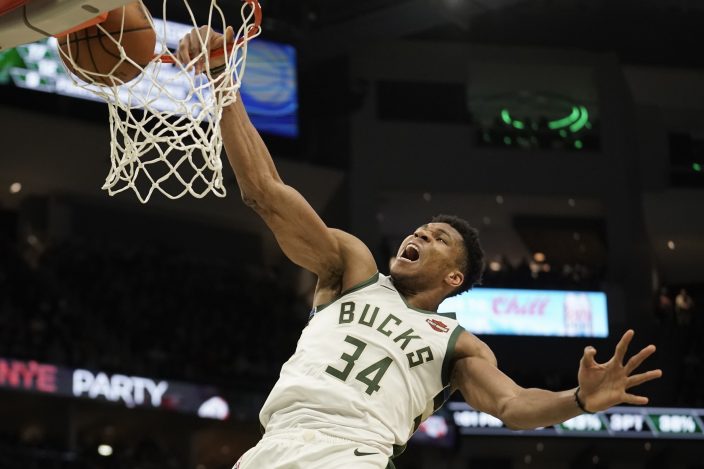 Milwaukee Bucks' Giannis Antetokounmpo dunks during the second half of an NBA basketball game against the Indiana Pacers Sunday, Dec. 22, 2019, in Milwaukee. The Bucks won 117-89. (AP PhotoMorry Gash)

James, as the leading overall vote-getter, will have the top pick when he and Antetokounmpo pick their teams; Antetokounmpo will pick first in the second round, when the reserves are chosen.

James is a starter for the 16th time, an NBA record. Being a 16-time All-Star also puts him third on the all-time appearance list, behind 19-time selection Kareem Abdul-Jabbar and 18-time selection Kobe Bryant. 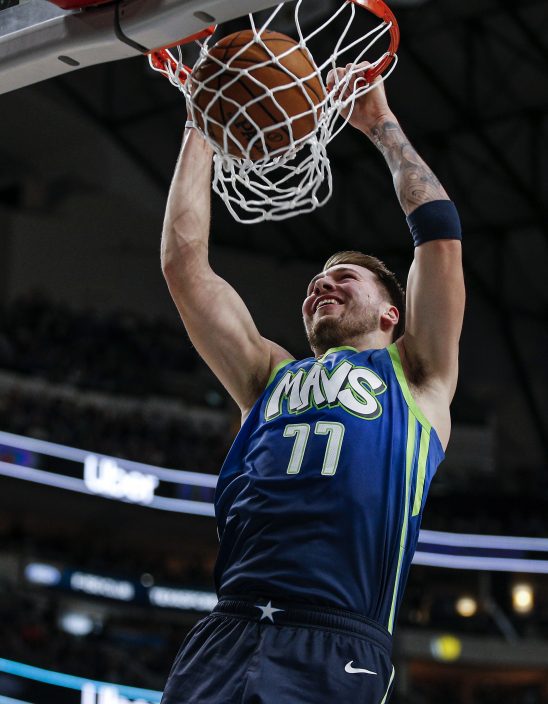 Antetokounmpo received 5,902,286 votes, easily the most in the race to be the captain from the East. Embiid got the second-most votes in the East, at 3.1 million and barely half of Antetokounmpo’s total.

Fan voting, the NBA said, was up 7% from last year.

Having the 21-year-old Young and the 20-year-old Doncic starting gives the NBA two starters those ages or younger for only the second time. The other was in 1998, when a 19-year-old Bryant and a 21-year-old Kevin Garnett got starter nods. 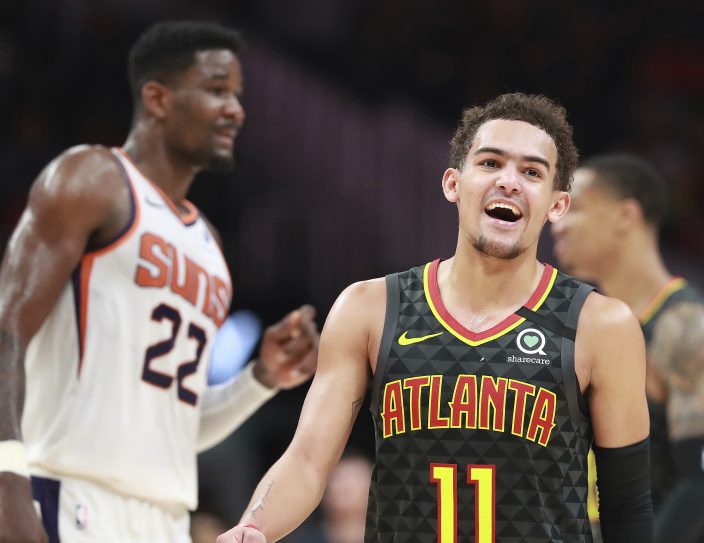 Atlanta Hawks guard Trae Young is all smiles during the final minutes of a 123-110 victory over Deandre Ayton and the Phoenix Suns in an NBA basketball game on Tuesday, Jan. 14, 2020, in Atlanta. (Curtis ComptonAtlanta Journal-Constitution via AP)

The reserves will be announced Jan. 31, with NBA head coaches doing the voting for those. James and Antetokounmpo will pick their teams on Feb. 6, first splitting up the eight remaining starters and then choosing from the pool of 14 reserves.

The starters were chosen through a formula that gave 50% of the weight to fan votes, 25% to player votes and 25% to voting done by a panel of 100 media members.

For the most part, the fans got who they wanted. The three frontcourt selections from the East and West mirrored the fan voting, as did the West guards. The only exception was among East guards: Young was the fans’ top pick, while Brooklyn’s Kyrie Irving was second among fans and Walker was third. 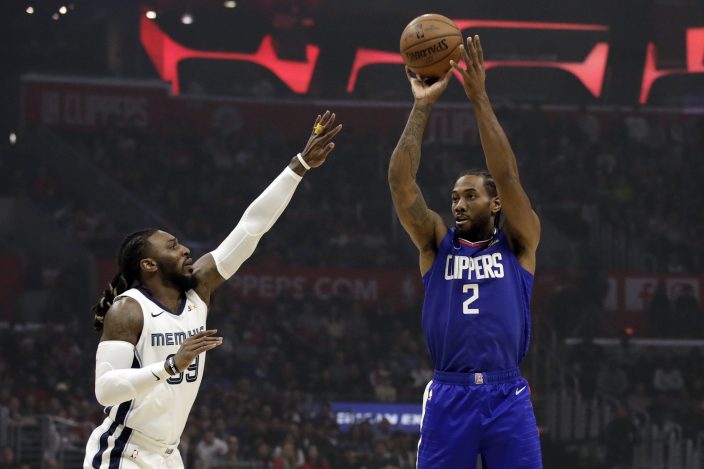 Walker, however, was the top East guard choice among media and NBA players. Irving was sixth in both of those tallies, enough to drop his total score below Walker.

Young bucked some trends as far as getting his All-Star starting spot.

He entered Thursday as the third-leading scorer in the NBA at 29.2 points per game, behind only Harden’s 36.6 and Antetokounmpo’s 30.0. But the Hawks are only 11-34 entering Thursday, and it is unusual for a player on a team at the bottom of the league or with a winning percentage under .250 to get an All-Star nod. 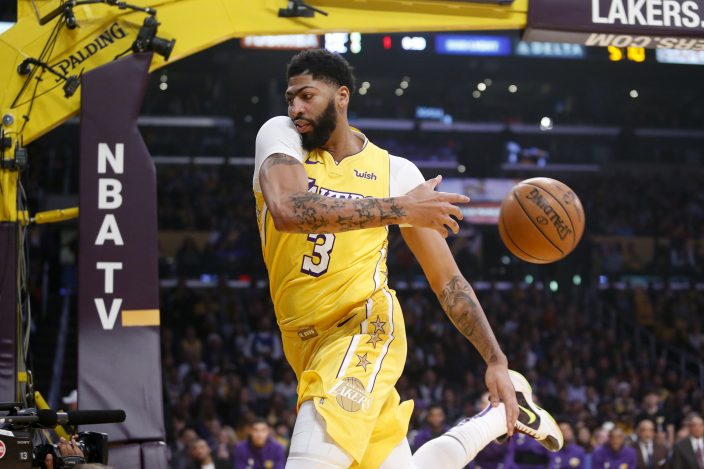 The last time it happened was 2016, with good reason. The Lakers were 11-44 and Bryant was a starter (and the leading votegetter) anyway, largely because that was his final season in the NBA.

NBA players cast votes for 292 of their colleagues as potential starters. Media members voted for a total of 26 different players. 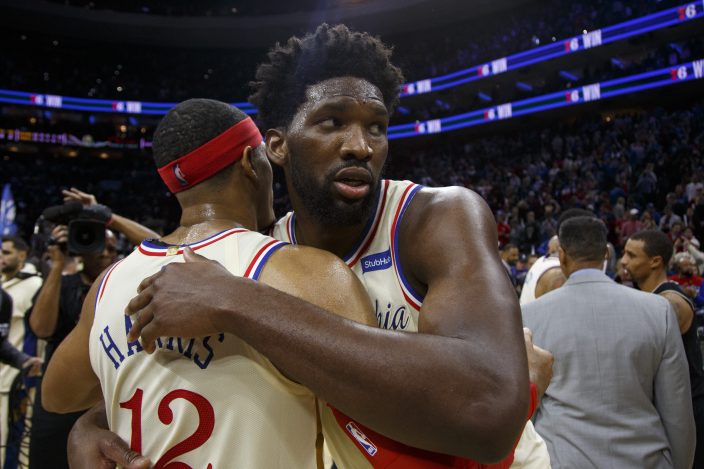 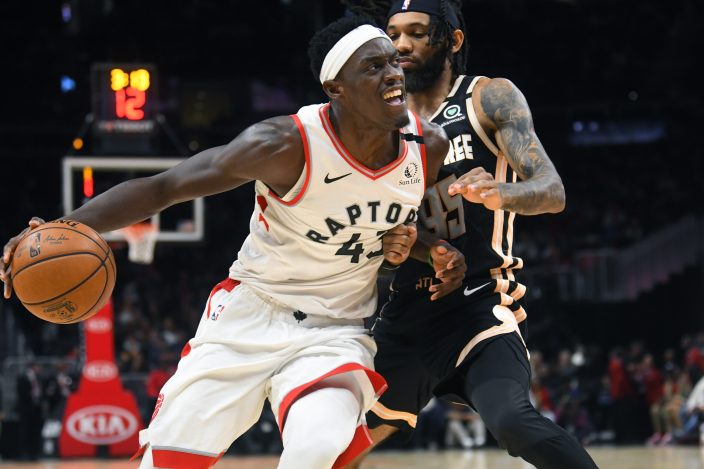 US leads training exercises in Africa amid focus on Sah ...

Crouching in the sparse brush, man ...

The West African nation of Togo is ...