Ash Barty is starting to feel right at home at Melbourne Park.

The top-ranked Aussie was the first player to secure a spot in the fourth round of the Australian Open, and thinks she's starting to regain the momentum that helped get her to the top of the rankings and a first major title in 2019. 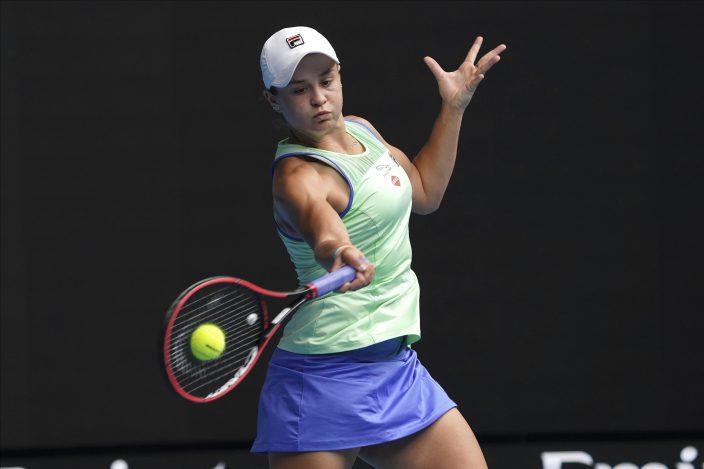 The 20-year-old Rybakina had won 11 of her first 12 matches of the season, winning the title in the tuneup tournament in Hobart after reaching the final in Shenzhen.

Barty, the French Open champion, won her first title on home soil in Adelaide last week and, after dropping the first set she played at Melbourne Park, has advanced through three rounds without losing another set. She had a tough start against Rybakina, having her serve broken in the opening game, but otherwise felt good about her latest win.

“I felt I needed to be switched on. A lot of the games were long and tough and happy to get out of them,” she said. “Today was probably my sharpest match that I played (this summer). I felt really comfortable moving around the court. I felt like I found the middle of the racket a lot sooner than my other matches."

Barty reached the quarterfinals last year, which gave her the confidence she carried through the full season and included titles at Roland Garros and the WTA Finals. An Australian title is a big step, though. It's been more than four decades since an Australian lifted the trophy.

She'll next meet either No. 18 Alison Riske, or her doubles partner Julia Goerges on Sunday for a spot in the quarterfinals.

Serena Williams, who has won seven Australian titles among her 23 majors, was playing Wang Qiang in the following match.

No. 14 Diego Schwartzman was the first of the men through the fourth round, beating No. 24 Dusan Lajovic 6-2, 6-3, 7-6 (7) and could meet seven-time champion Novak Djokovic in the fourth round.

After a disruptive day weather-wise on Day 4, it was mostly sunny at Melbourne Park on Friday.

Shares were mostly higher in Asia ...