It was bittersweet, Caroline. 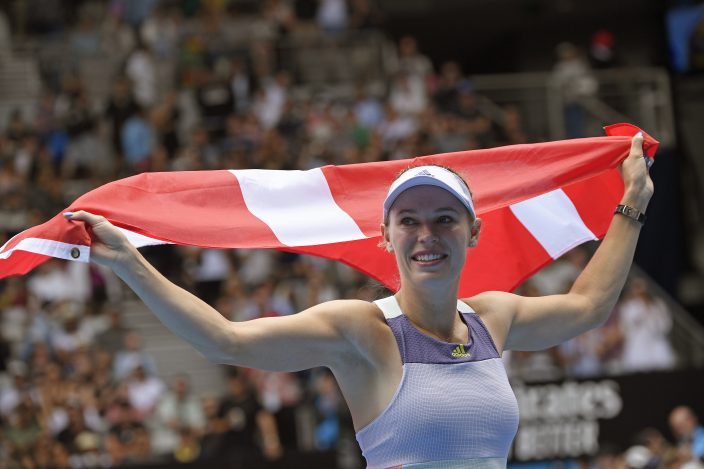 The familiar Neil Diamond tune played on the speakers at Melbourne Arena. Her father, who also has coached her, himself held back tears as he lifted the 29-year-old Wozniacki like she was a much younger daughter. Her mother wept. Her husband, former New York Knicks forward David Lee, smiled. He was holding back the waterworks, also.

Wozniacki's first task at her final post-match news conference was to locate something to dab at her eyes — “I was told there are tissues,” she said — then suggested she was probably “cried out.”

“There's a lot of emotions, a lot of things I can't compartmentalize now,” the former No. 1-ranked Wozniacki said. "A lot of excitement. A little sadness. Flashbacks to since I was a kid to this moment. But I'm happy. I'm very happy. Even though I was crying a lot earlier, it really wasn't sad tears. I think just happy tears.” 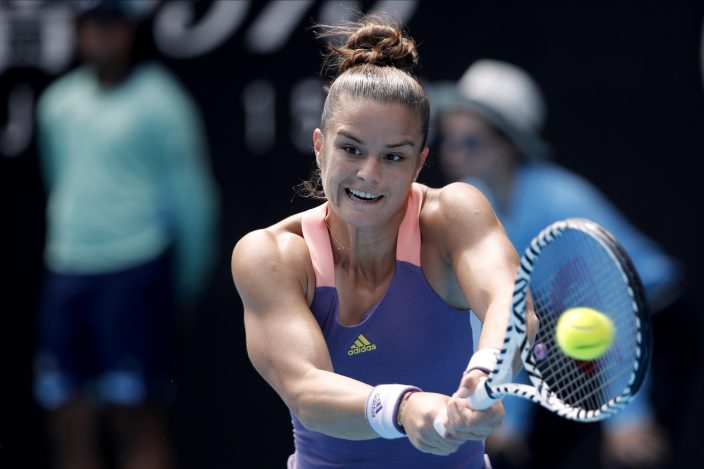 Greece's Maria Sakkari returns a shot against Madison Keys of the U.S. in their third round singles match at the Australian Open tennis championship in Melbourne, Australia, Friday, Jan. 24, 2020. (AP PhotoAndy Wong)

Wozniacki announced late last year that she would retire from the sport after the Australian Open, where she won her only Grand Slam singles title.

When the draw was made for the season's first major tournament, there was a lot of hype about a potential fourth-rounder between Wozniacki and her good friend Serena Williams, who has won seven Australian Opens among her 23 majors.

Neither of them will be in the second week, with Wozniacki telling the crowd it was “only fitting that my last match ended with a forehand error" and Williams describing her shocking loss to Wang Qiang as unprofessional. 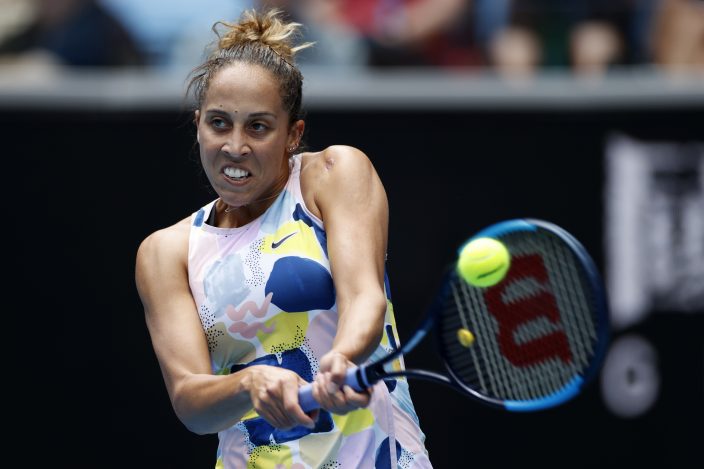 Madison Keys of the U.S. returns a backhand return to Greece's Maria Sakkari in their third round singles match at the Australian Open tennis championship in Melbourne, Australia, Friday, Jan. 24, 2020. (AP PhotoAndy Wong)

The pair met later to commiserate.

“Yeah, she came into the locker room afterwards. We were both kind of bummed about our matches,” Williams said, tearing up when asked about her friend's legacy. “Yeah, she's had an amazing career. Oh, my God, I'm getting emotional. Oh, my God. I'm going to miss her.” 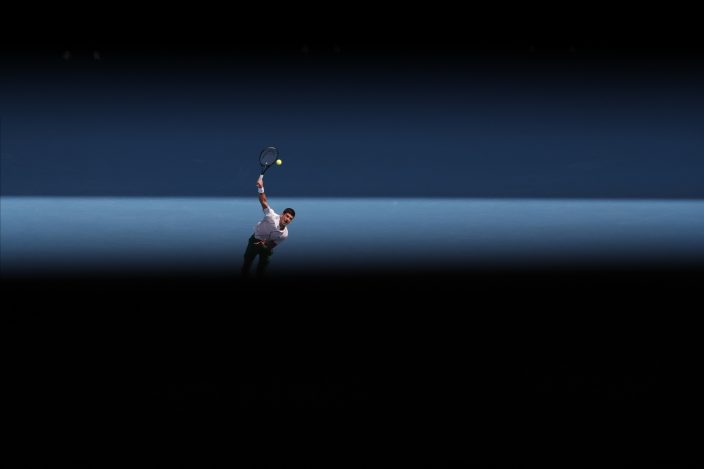 Seven-time Australian Open winner Novak Djokovic has been working on his serve with Goran Ivanisevic, and is attributing big improvements to the 2001 Wimbledon champion.

One of the characters of the game, Ivanisevic is famed for saying his success on any given day depended on which of his personalities showed up to play. He reached a career-high No. 2 and was the first wild-card entry to win the Wimbledon title. Whichever Goran showed up, he was renowned for his serve.

Djokovic's 16 major titles are third only to Roger Federer (20) and Rafael Nadal (19) among male players, and the 32-year-old Serbian is a strong contender to add to his tally. In the endless search for improvement, he has recruited the Croatian tennis great because “we speak the same language” — literally and figuratively. 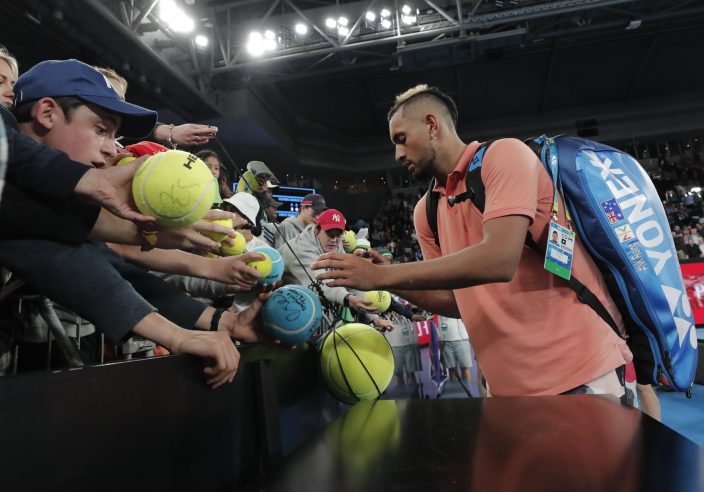 Djokovic advanced to the fourth round for a 50th time at a major when he beat Yoshihito Nishioka 6-3, 6-2, 6-2 on Friday, not conceding a point on his first serve in the first two sets.

“Inspired by my coach, Goran, who came in today,” Djokovic said, adding that it was “lots of fun" to work with Ivanisevic.

“He was one of my childhood idols,” Djokovic said.

The Greek fans weren't as boisterous this time, but the end result was the same: another win for Maria Sakkari.

Two days earlier, police said up to 20 people supporting Sakkari were ejected for disruptive behavior from Court 8, one of the outside courts at Melbourne Park that are easily accessible for fans with grounds passes. Margaret Court Arena is an all-ticketed stadium, and Australian Open seats sell out quickly.

Äsked if her fans were a little less vocal this time, Sakkari replied: "Yeah, I think it's because ... well, what I was told is that the court was sold out and they couldn't find tickets.”

“I think they didn't do anything wrong in my match to be kicked out," she said. “I don't know what they did later, but actually my previous match they were perfect."

Nick Kyrgios said he'd been waiting for this moment for weeks at the Australian Open. The mercurial Aussie teamed up with Amanda Anisimova in the first round of mixed doubles on Friday for a 7-5, 6-4 win over Monique Adamczac and David Vega Hernandez on a packed Court 3.

Kyrgios — on a day off between his second- and third-round matches in men's singles — closed with an ace. He has been popular this month after launching a global tennis fundraising effort for the bush fire relief by pledging to donate 200 Australian dollars (about $140) for every ace in January.

Anisimova, an 18-year-old American who reached the fourth round in singles in Australia and the semifinals at the French Open, was beaten in the first round of singles by Zarina Diyas.

Kyrgios says he gets more nervous playing doubles than singles, because he doesn't want to let down his teammates.

Australian Open heats up, right in in time for semifinals

Navratilova sorry for protocol breach, not for Court protest

It's Barty time at Australian Open; local hope is into semis

First for Jabeur as she reaches quarterfinals in Australia