Britain officially leaves the European Union on Jan. 31 after a debilitating political period that has bitterly divided the nation since the 2016 Brexit referendum.

Difficult negotiations setting out the new relationship between Britain and its European neighbors will continue throughout 2020.

This series of stories chronicles Britain’s tortured relationship with Europe from the post-World War II years to the present. 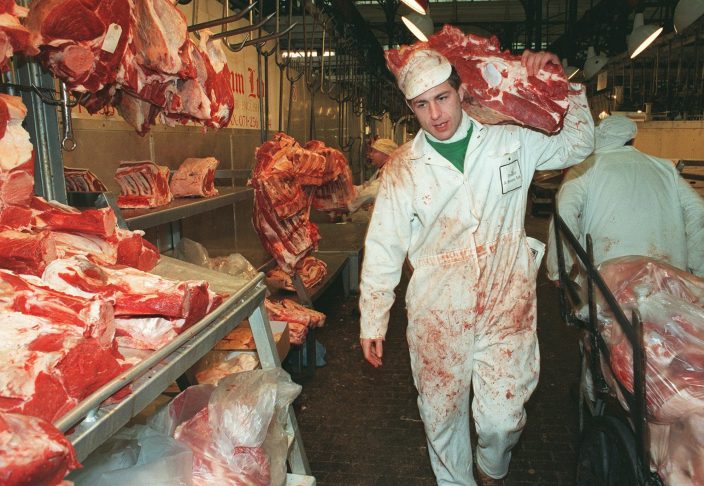 FILE - In this Thursday March 21, 1996 file photo, butcher Graham Poultney carries a leg of beef at London's Smithfield meat market. The European Union banned British beef exports after an outbreak of mad cow disease, prompting one of the biggest fractures in the relationship between Britain and the EU. On Jan. 31, 2020, Britain is scheduled to leave the EU. (AP PhotoCharles Miller, File)

Margaret Thatcher's surprise successor as prime minister, the far more pragmatic John Major, was keen to “rebuild shattered fences" within Europe, even while keeping Britain out of the single currency.

“Game, Set and Match to Britain," he claimed, at the conclusion of the summit in the Dutch town of Maastricht in 1991, when he negotiated British opt-outs from the single currency as well as the bloc's social provisions.

Even though he managed to heal the European divide within his party enough to win the 1992 general election, his government would soon descend into open warfare over Europe.

Though Major had negotiated the opt-out from the looming single currency, he had pushed in his previous guise as Britain's Treasury chief for the pound to join the European Exchange Rate Mechanism, or ERM. This involved member currencies effectively floating within narrow ranges against the powerful German Deutsche Mark.

But it ended in humiliation for Major and Britain. Hedge funds and the Hungarian billionaire George Soros bet against the pound — and won.

Sept. 16, 1992 became known as “Black Wednesday” — a day that saw the British government humbled and seemingly out of control. Though the pound’s exit from the ERM was an economic shock almost unparalleled in the post-war period, it was seen as a gift by the more euroskeptic, or by now euro-hostile, elements within the Conservative Party.

The growing tension with Europe was particularly evident during the mad cow's disease outbreak in Britain in 1996, which prompted Brussels to ban imports of British beef. Major sought to bring an end to the EU ban and eventually said Britain would no longer cooperate in EU business until it had been lifted. By June 1996, a framework to lift the ban was agreed but relations had clearly been strained.

Major didn't get any of the credit of the ensuing boom that was partly due to the lower pound following its exit from the ERM — he and his government would be forever tainted by what had occurred on Black Wednesday.

In 1997, the pro-EU Tony Blair led the Labour Party back into government for the first time in 18 years, with as benign an economic backdrop as any new prime minister could possibly wish for.

Euroskepticism appeared to be in retreat but behind Blair’s landslide majority lay the first seeds of the 2016 Brexit vote.

The Referendum Party, founded and led by the billionaire James Goldsmith to promote another vote on Britain’s EU membership, managed to get 2.6% of the total votes cast, mostly former Conservatives. It may not sound like much, but Goldsmith made a lot of noise.

When the party disbanded after the election and Goldsmith died, the UK Independence Party took on the baton.

Boy did it — and UKIP's then chairman Nigel Farage — run with it.