Tokyo put on a flashy fireworks display on Friday to mark the 6-months-to-go milestone for this year's Olympics.

The show took place high above a barge stationed in Tokyo Bay that supports a massive replica of the five Olympic rings, a reminder the games are almost here.

Japan residents needed to enjoy the fireworks. These may be the last for awhile. 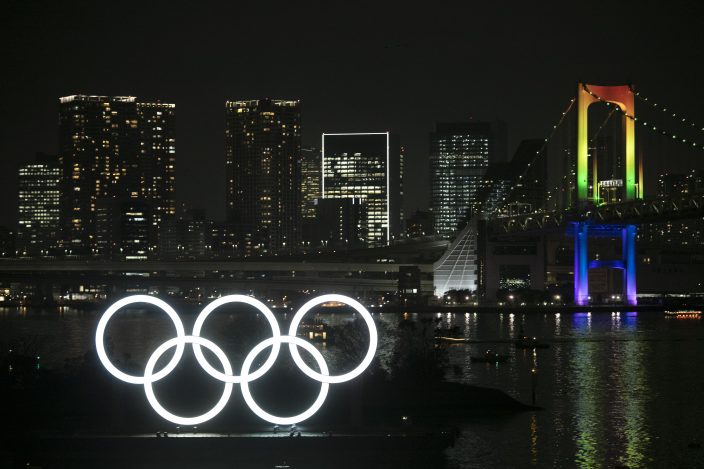 The illuminated Olympic rings float in the water near the Rainbow Bridge during a ceremony held to celebrate the 6-months-to-go milestone for the Tokyo 2020 Olympics Friday, Jan. 24, 2020, in the Odaiba district of Tokyo. (AP PhotoJae C. Hong)

More than 70 summer festivals across Japan featuring traditional fireworks shows have been canceled or have changed their dates. The Associated Press counted at least 56 festivals that said the Tokyo Games were the reason for the move, citing a shortage of police and security guards that have been assigned instead to the Olympics and Paralympics.

The cost is surely much higher with some security expenditures not represented in the Olympic budget. 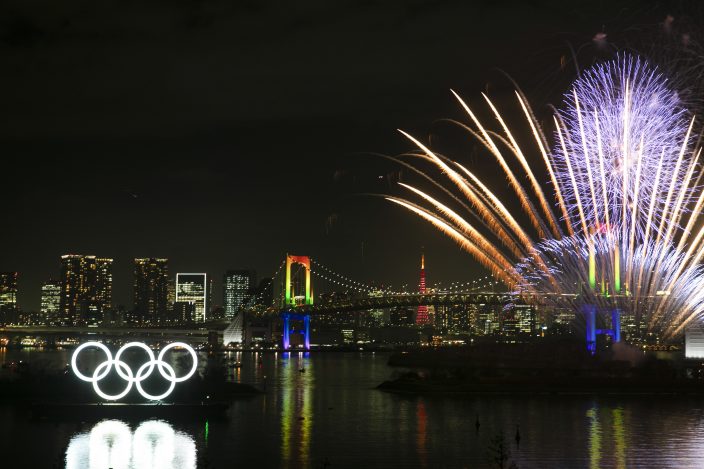 Fireworks explode near the illuminated Olympic rings during a ceremony held to celebrate the 6-months-to-go milestone for the Tokyo 2020 Olympics Friday, Jan. 24, 2020, in the Odaiba district of Tokyo. (AP PhotoJae C. Hong)

The Olympics are even impacting Hiroshima in western Japan, where the annual August fireworks festival on the scenic island of Miyajima has been canceled.

The summer fireworks festivals share a special place in Japanese culture, much like July 4th celebrations across the United States. 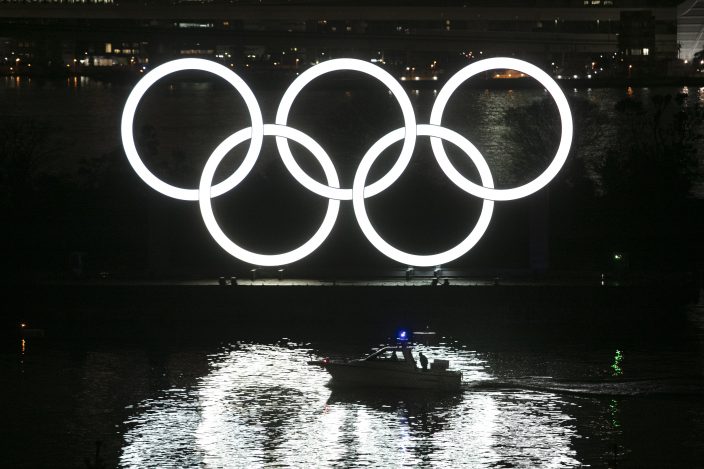 A small boat passes by the illuminated Olympic rings during a ceremony held to celebrate the 6-months-to-go milestone for the Tokyo 2020 Olympics Friday, Jan. 24, 2020, in the Odaiba district of Tokyo. (AP PhotoJae C. Hong)

Tokyo has brought forward several of its festivals, including the massive display on the Sumida river. The city of Saitama, north of Tokyo, has decided to cancel its 150-year-old fireworks festival because it conflicts with Olympic golf. And in Kamakura, known for its giant Buddha statue, July fireworks are off because logistics clash with Olympic sailing.

The Tokyo Olympics are unprecedented in many ways.

Local sponsorship is just over $3 billion, at least two times larger than any previous games.

And the $1.43 billion national stadium by Kengo Kuma is a jewel. It's green and wood exterior feels like it's been there forever, promising to be the centerpiece — much the way Kenzo Tange's Yoyogi Gymnasium was for the 1964 Tokyo Olympics.

"Assuming there is no disaster with the heat or so forth, the Olympics will be well-handled," David Leheny, a political scientist at Waseda University in Tokyo, said in an interview with the AP. “They are not going to be any worse in terms of the chaos of getting from place to place than most Olympics. They will probably be handled better in a lot of ways. And Japan can be charming."

Japan is officially spending $12.6 billion to put on the Olympics, but the national audit bureau puts the figure closer to 3 trillion yen — about $28 billion.

What's a developed country like Japan getting for its money?

“Japan risks getting eclipsed if all people talk about is both the rise of China, and Japan being stuck in its two or three lost decades," Leheny said. “This is an opportunity to host the Olympics and showcase a Japan that puts on a first-rate show. To represent Japan as a place that is technologically savvy, but culturally distinctive and filled with creative people."

The other mission is to convince the world that Fukushima prefecture has recovered. The area, roughly 250 kilometers (150 miles) northeast of Tokyo, was devastated by the 2011 earthquake, tsunami and the meltdown of three nuclear reactors. Thousands still struggle, many in temporary housing.

There is resentment in the northern prefecture, and in neighboring prefectures, that some of the billions spent on the Olympics could have aided recovery. Some resident fear the Olympics will be used to draw a line under the disaster.

“There is a sense that once the Olympics are over, Japan can start cutting off subsidies to those hurt by the disaster,” Leheny said.

Greater Tokyo's rail system if famously efficient and is the best way to get around the urban area of 35 million. But expect it to be stressed during the Olympics.

Professor Azuma Taguchi at Chuo University said the system is already running at twice capacity and the Olympics could be the breaking point. Taguchi's study predicts 15 stations will experience greater than 200% capacity, and some will reach 400% at peak hours. Some railways have designated special oshiya, or “pushers,” to pack commuters into rush hour cars — often wearing white gloves.

Tsunekazu Takeda stepped down 10 months ago as the head the Japanese Olympic Committee amid a vote-buying scandal that French investigators suspect helped Tokyo land the Olympics.

Takeda acknowledged he signed off on about $2 million in payments to a Singapore consulting company, Black Tidings, and its head Ian Tan Tong Han. The payments came just before Tokyo was picked in 2013 by the IOC. French investigators have linked Black Tidings to Papa Massata Diack, one of the sons of powerful former IOC member Lamine Diack of Senegal. Lamine Diack was known to have influence over Olympic voters in Africa.

Russia is facing a four-year Olympic ban for manipulating doping data. It has appealed to the Court of Arbitration for Sport and a ruling is expected in several months. The sanctions imposed by the World Anti-Doping Agency forbid the use of the Russia team name, flag or anthem. However, some Russians are still expected to compete as neutral athletes in Tokyo — as they did at the 2018 Winter Olympics in Pyeongchang. No one knows how many.

The IOC has warned athletes against hand gestures or political signs on the medal podium. The IOC says the games should not be politicized. Expect it anyway. Some athletes side with the IOC. Others have said the IOC has no authority to curb their civil liberties. Some have pointed out that restricting speech is itself a political act. The IOC is, in fact, highly political with an observer seat at the the United Nations. It has intervened frequently in high-profile political disputes, including North and South Korea.

A blistering century by Kamran Akm ...

German state lawmakers at center of uproar agree on gov ...