U.S. Vice President Mike Pence met Friday with Pope Francis during a visit to Rome that includes meetings with the Italian president and premier.

The audience comes on the same day that President Donald Trump is attending a big anti-abortion rally in Washington, the first sitting U.S. president to do so in the March for Life’s history.

Pence, his wife and daughter-in-law were greeted at Rome’s Ciampino airport by the U.S ambassador to the Holy See, Callista Gingrich, and her husband Newt, the former U.S Speaker of the House who oversaw the impeachment proceedings against then-President Bill Clinton. U.S. Vice President Mike Pence and his wife Karen hold hands as they disembark from Air Force Two upon their arrival at Rome's Ciampino airport, Friday, Jan. 24, 2020. Pence is scheduled to meet later with Pope Francis at the Vatican. (AP PhotoGregorio Borgia)

Pence’s visit and audience with Francis comes amid the Senate impeachment trial of Trump.

After the audience with Francis, Pence heads to separate meetings with Italian President Sergio Mattarella and Premier Giuseppe Conte. 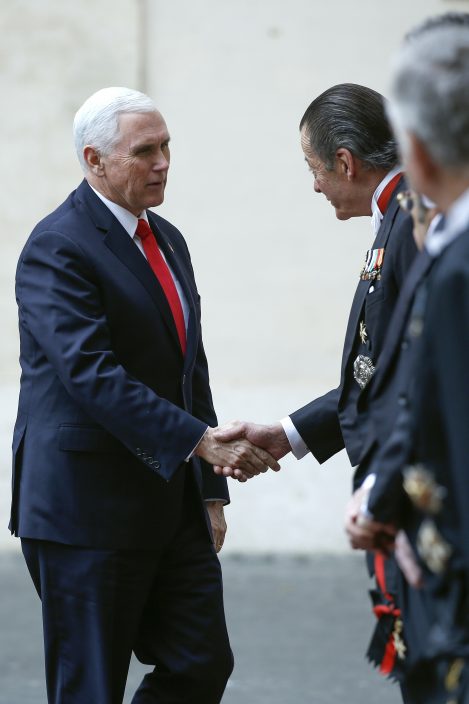 US Vice President Mike Pence greets a Vatican Gentleman as he arrives at the San Damaso courtyard at the Vatican ahead of his private audience with Pope Francis, Friday, Jan. 24, 2020. (AP PhotoDomenico Stinellis)

Ryanair CEO criticized for singling out Muslim men as t ...