The Taliban, in a rambling commentary published on their website, expressed frustration with what they describe as additional U.S. demands in peace talks — even after they had offered a “reduction of violence.” They have not publicly outlined what that would entail and did not explain the new Washington demands.

The insurgents' gesture of reduced violence, though never quantified, was meant to open a window for the signing of a peace agreement that could see the withdrawal of U.S. troops and the end to the 18-year war in Afghanistan, America's longest conflict.

Meanwhile, Amnesty International said in a statement Friday that to talk about a “reduction of violence” was an “absurdity.” 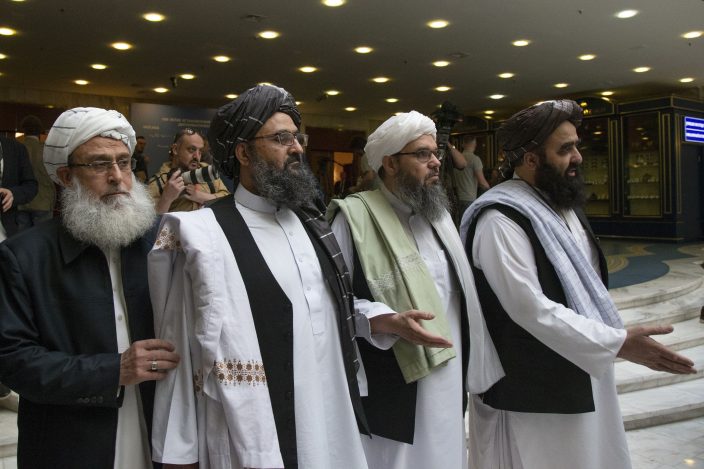 “In a conflict marked by attacks on civilians, the term ‘violence reduction’ is an absurdity. There can be no acceptable level of violence," said Omar Waraich, deputy South Asia director at Amnesty.

“The United States and the Afghan Taliban must commit to abide by the laws of war and end all attacks on Afghan civilians,” he added.

Earlier, Taliban officials familiar with the talks told The Associated Press the Taliban had offered a cease-fire, lasting seven to 10 days, to Washington's peace envoy Zalmay Khalilzad durig their latest round of talks last week in the Gulf Arab state of Qatar, where the Taliban maintain a political office.

However, Khalilzad had previously sought a more comprehensive end to the fighting and it was never known whether Washington would have agreed to a temporary truce. The U.S. State Department has withheld comment.

In their late Thursday commentary, the Taliban accused Washington of “wasting time" and said the talks with Khalilzad had become bogged down over a definition of “reduction of violence.” The tone was surprisingly harsh following earlier optimistic tweets from Taliban political spokesman Sohail Shaheen who hinted the insurgents and Khalilzad were close to an understanding.

The Taliban also said Khalilzad is seeking additional assurances on behalf of the Kabul government, with which the Taliban have refused direct talks.

They also balked at a U.S. statement following President Donald Trump's meeting with Afghan President Ashraf Ghani in Davos, Switzerland, earlier this week during which the U.S. president "reiterated the need for a significant and lasting reduction in violence by the Taliban that would facilitate meaningful negotiations on Afghanistan's future.

Previously Khalilzad had said any agreement to withdraw troops from Afghanistan will go hand in hand with negotiations between the two sides in the conflict.

And even if direct talks with the Taliban were to be held, it also remains unclear who would negotiate for Kabul after preliminary results of the presidential election last September giving Ghani the win are being contested. The election commission has yet to announce the final winner in the contest.

The Afghan president's spokesman, Sediq Sediqqi, said that Ghani has a small team ready to negotiate but bickering has marred efforts to cobble together a team that anyone other than Ghani loyalists can agree upon. Ghani's political opponents say they have been consulted but that their suggestions have been ignored.

The Taliban today control or hold sway over roughly half of Afghanistan and continue to stage near-daily attacks targeting Afghan and U.S. forces, Kabul government officials or those seen as linked to the government. Scores of Afghan civilians have also been killed in the crossfire and by roadside bombs planted by militants or in anti-Taliban operations undertaken by government forces assisted by American troops.

US: Taliban's 'reduction of violence' deal to start tonight

US steps up deadly airstrikes, during Taliban peace talks

Taliban say they handed cease-fire offer to US peace envoy

US wraps up Pakistani visit; Afghans set demands for talks

US Afghan peace envoy takes push for peace to Pakistan