With Syria's currency hitting record lows, a nationwide symbolic campaign has been launched by merchants, barbers, supermarkets and even gyms in the war-torn country to support the Syrian pound.

Under the slogan "Our pound is our pride," the campaign encourages merchants to sell any staple or service for only one Syrian pound. The one-pound coin has been out of use for years and has no real value. But organizers say it provides a morale boost and a distraction to war-weary residents who have been hit hard by sky-rocketing prices.

"This cannot help the Syrian economy, but it is a chance for some people to forget about their troubles and worries," said Marla Khouri, general director of al-Wadi Hotel in the village of al-Meshtayeh in the countryside of Homs province. She is offering two days of accommodation for customers for the price of a pound. 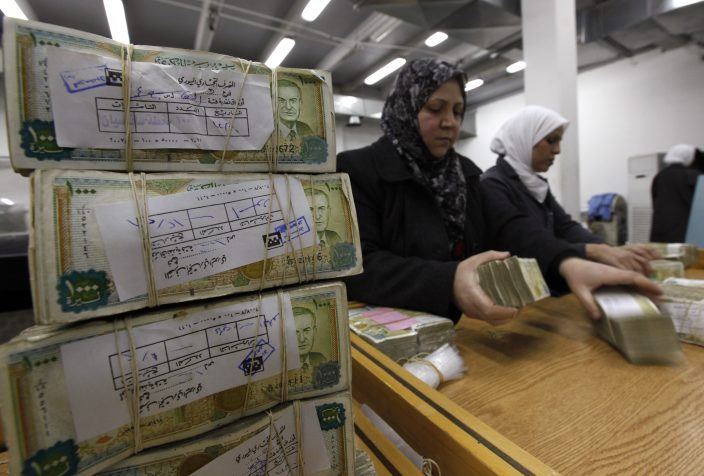 FILE - In this January 13, 2010 file photo, Syrian employees stack packets of Syrian currency in the Central Syrian Bank in, Damascus, Syria. With Syria's currency hitting record lows, a nationwide symbolic campaign has been launched by merchants, barbers, supermarkets and even gyms to support the Syrian pound. (AP PhotoHussein Malla, File)

Khouri said the offer was made basically for low-income customers and in a bid to support the pound. The hotel's 80 rooms, she said, are now fully occupied.

The Syrian pound has been hammered by nearly nine years of war, western sanctions, widespread corruption and a shortage of dollars, throwing more Syrians into poverty. Eight of 10 Syrians earn less than $100 a month, according to the U.N., and the vast majority are paid in Syrian pounds.

When Syria’s conflict erupted in March 2011, a dollar was valued at 47 pounds. This week, it traded at around 1,000 Syrian pounds at some exchange shops in the capital Damascus. The situation has been further affected by the financial crisis in neighboring Lebanon, which has long served as Syria's main economic and financial gateway to the world.

The government in recent weeks has taken measures to crack down on the black market and a presidential decree issued earlier this month banned the use of any currency other than the Syrian pound.

Alaa Sukkariyah, a taxi driver in the Homs' countryside, said the campaign has made Syrians stop talking about the U.S. dollar “and are now only talking about the pound.” He said he drives people around in exchange for one pound and the offer is open for several days and can be further prolonged.

Nearly half a million people have been killed and millions displaced in Syria's long-running civil war, which erupted in 2011 in the form of anti-government protests amid Arab Spring uprisings and eventually turned into an armed insurgency.

Kamel Ali Fotneh, owner of al-Fairouz shop which sells household and electrical appliances, said he took part in the campaign to show support for the local currency. He said he's selling some items for a pound, mainly glass and plastic goods.

One customer at the shop said she bought six tea glasses for one pound, down from 1,000 pounds, for each glass.

Malaz Arous, the owner of a cosmetics shop, said he is selling cosmetics and accessories for one pound for three days.

"We want to see a smile on the faces of the poor and low-income people, even if I may lose one or two millions pounds," Arous said, as dozens of women stood in line outside the shop.