The United States women's season-opening Pro League field hockey game against the Netherlands in North Carolina on Friday was canceled after the death of team manager Larry Amar.

Amar, who died this week, was the captain the U.S. men's field hockey team at the 1996 Atlanta Olympics. He joined the U.S. women's team staff in February 2019 as assistant coach and recently transitioned to national teams manager, according to USA Field Hockey.

The International Hockey Federation, known as FIH, said the cancellation was "a mark of respect for, and to pay tribute to" Amar, and to "provide support to the U.S. team at this particularly painful time." 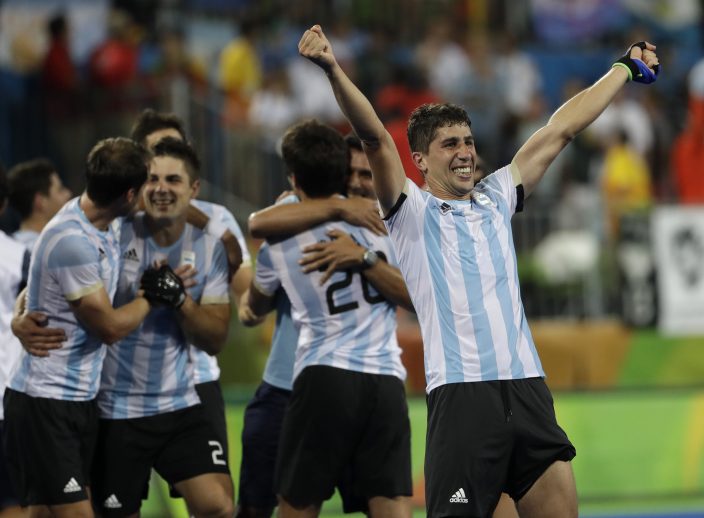 The Pro League, which is in its second season, is the biggest international field hockey competition ahead of the Tokyo Olympics. And this year's tournament is the first to include India, which beat the Netherlands last weekend in back-to-back men's games.

India’s inclusion was key to the this season's competition, which includes nine men’s and nine women’s teams playing worldwide until June. The 12-nation Olympic tournaments start in Tokyo on July 25.

“Having India will make a big difference,” federation CEO Thierry Weil said of the traditional field hockey powerhouse in a recent interview.

Allowing the U.S. women two more days to prepare for their first game on Sunday fits a policy of the FIH listening to players before making Pro League decisions.

The U.S. women were already scheduled to host the Netherlands on Sunday for the second game in a double-header weekend at the University of North Carolina in Chapel Hill. This season's new schedule gives each team four home double-headers and four overseas trips to halve the travel demands.

“When you find out you can do something better, you should do it,” Weil said, citing player concerns that the 2019 program was tiring and affecting their jobs off the field.

Teams should now arrive fresher in Tokyo for the two-week Olympic tournaments, where Argentina's men and Britain's women will be the defending champions.

Weil also hopes the 13th-ranked American women are better promoted playing at UNC than last year’s matches at nearby Wake Forest University and in Lancaster, Pennsylvania. The Americans finished last in the league and the Dutch won the first women's title in a Final Four event they hosted.

A league format is now in place this season, and it includes the same nine national teams for each of the men's and women's competitions through 2022.

“We need to make the entire league interesting by relegation and promotion,” Weil said, with an eye on speeding progress in future Olympic host nations.

Second-tier events are planned to eventually feed into the Pro League. It should help France, which will host the 2024 Olympics, reach the top tier. The U.S. men’s team is currently No. 24, but should get automatic entry to the 2028 Los Angeles Olympics.

Field hockey is part of the traditional Olympic program but an expanded 33-sport Tokyo lineup also includes fast-emerging urban action like 3-on-3 basketball, skateboarding and surfing. Breakdancing starts at the 2024 Paris Games.

Rashford could miss rest of season and Euros, says Sols ...