During a raucous campaign rally in which Trump critiqued some of his Democratic challengers, the president launched into an unprompted defense of Sanders. Warren had accused Sanders of telling her that a woman couldn’t win the White House in November, but Sanders insisted he would never say such a thing. Trump concurred.

“I don’t believe that Bernie said that. I really don’t,” Trump told his supporters. “It’s not the kind of thing he would say.” 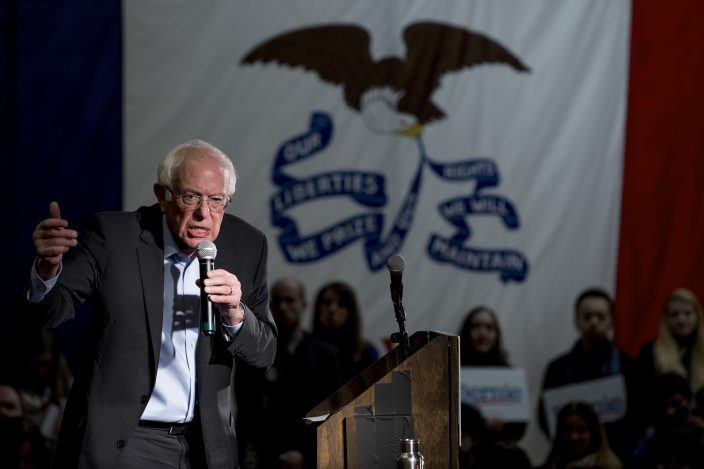 FILE - In this Jan. 20, 2020, file photo, Democratic presidential candidate Sen. Bernie Sanders, I-Vt., speaks at a campaign stop at the State Historical Museum of Iowa in Des Moines, Iowa. As the Democratic primary intensifies ahead of the first voting contests, President Donald Trump and his allies have issued a series of favorable comments about Democrat Bernie Sanders. It's a strategy aimed at trying to take advantage of Democratic divisions and trying to attract some Sanders' supporters to Trump's campaign if the senator is not his party's nominee. (AP PhotoAndrew Harnik)

As the Democratic primary intensifies before the first contests to decide the nominee, Trump and his allies have issued a series of curiously favorable comments about Sanders. They've played up the Vermont senator's electoral strength and fundraising prowess. And they’ve suggested that if Sanders doesn’t secure the nomination, it will be because the party rigged the primary against him. It's a sentiment that resonates with some Sanders’ backers who believe the Democratic National Committee worked against him in 2016, when Hillary Clinton won the nomination.

In offering occasional support for Sanders, Trump is taking a page out of his own playbook from the election four years ago and betting that the Democratic divisions that helped him win the White House are even deeper now.

Indeed, more moderate Democrats fear that Sanders — a self-described democratic socialist — would struggle to pull together a robust coalition in the general election. But they also worry his supporters might not vote in large enough numbers for any other nominee if Sanders fails in his second quest for the party’s nomination. 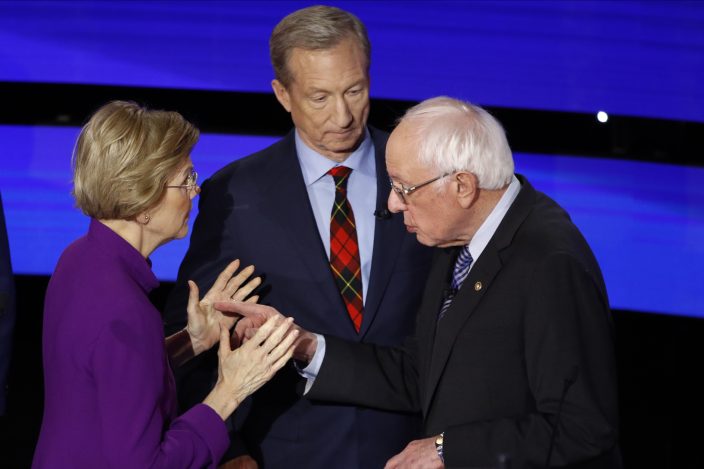 FILE - In this Jan. 14, 2020, file photo, Democratic presidential candidate Sen. Elizabeth Warren, D-Mass., left and Sen. Bernie Sanders, I-Vt. after a Democratic presidential primary debate hosted by CNN and the Des Moines Register in Des Moines, Iowa. Candidate businessman Tom Steyer looks on. As the Democratic primary intensifies ahead of the first voting contests, President Donald Trump and his allies have issued a series of  favorable comments about Democrat Bernie Sanders. It's a strategy aimed at trying to take advantage of Democratic divisions and trying to attract some Sanders' supporters to Trump's campaign if the senator is not his party's nominee. (AP PhotoPatrick Semansky, File)

Both scenarios would benefit Trump. The president is closely monitoring the Democratic race, and has taken note of Sanders’ strong fundraising and polling, according to Republicans who have spoken with him about the election. But if Sanders stumbles in the coming weeks, Trump is also said to see an opportunity to suppress some of the senator’s most ardent supporters, or even win over some of their votes.

For some Democrats, it’s a worrisome prospect.

“There are people who are very anti-establishment, who have a lot of oppositional feelings about the political establishment,” said Jennifer Palmieri, who advised Clinton’s 2016 campaign. “Sanders is appealing to them and if that doesn’t work for them, then the Trump team hopes they’ll come their way.”

Though Trump and Sanders are at odds on most major issues, they have some striking similarities. Both rose to political prominence without the backing of their parties’ establishment, but now wield significant influence over those parties’ policy positions. Both men have forged visceral connections with lower income voters, in part by pledging to revamp trade policies they say have hurt American workers.

In 2016, Sanders and Trump did share a small number of voters. According to data from the Pew Research Center, 3% of voters who consistently backed Sanders in 2016 Democratic primary voted for Trump in the general election. Another 11% of Sanders supporters voted for third party candidates over Clinton.

David Riley Campbell, 23, was among the Sanders supported who didn’t back Clinton against Trump (Campbell said he didn’t vote for anyone in the general election). He said he’s learned his lesson and will be “going blue no matter who” in 2020. Still, he acknowledged he would be “much, much less enthusiastic” about a candidate other than Sanders.

“There’s a very short list of candidates I trust,” said Campbell, who is volunteering in Iowa for Sanders before the Feb. 3 caucus.

It’s that lingering distrust of other Democrats among Sanders supporters that Trump’s team is eager to capitalize on if the senator falters in the coming weeks.

Trump has sent multiple tweets over the past week suggesting Democrats were “rigging the election” against Sanders because he was being pulled off the campaign trail to serve as a juror in the Senate impeachment trial during the final weeks before the caucus. Trump never mentioned that three other senators — including Warren of Massachusetts, Sanders’ chief progressive rival — were also marooned in Washington for the trial.

On Thursday, senior Trump adviser Kellyanne Conway wrote in The Washington Post that if Democrats were serious about nominating the most electable candidate, they would side with Sanders. He’s the candidate, Conway wrote, “who actually won primary contests and proved he can play David to Goliath in key places four short years ago.”

Tim Murtaugh, a spokesman for Trump’s campaign, said those comments don’t change the fact that the president sees Sanders as a someone who could be a “complete disaster” in the White House. Yet Murtaugh also gave a nod to Sanders’ supporters, saying it’s “obvious the knives are out” for the senator in the Democratic primary.

“It would be completely understandable if the Sanders camp said, ‘Here we go again,’” Murtaugh said.

Trump used a similar strategy in 2016. He urged Sanders to run as an independent after Sanders fell behind Clinton in the race for delegates, which determine the Democratic nominee, and openly courted Sanders' supporters.

Four years later, some of Sanders’ backers say their eyes are wide open to Trump’s strategy.

Sanders’ campaign did not respond to questions about the favorable comments from the president and his advisers. Earlier this month, Sanders distanced himself from Trump’s assertions that Democrats were rigging the 2020 primary against him.

“His transparent attempts to divide Democrats will not work, and we are going to unite to sweep him out of the White House in November,” Sanders said in a statement.