With President Donald Trump’s impeachment trial keeping them on Capitol Hill for part of Saturday, several Democratic candidates trying to oust him in November will challenge the reality that even would-be presidents can’t be in two places at once.

Their method: flood the early nominating states with top-shelf surrogates — rock star lawmakers, former Cabinet members, celebrities and spouses — before returning to Iowa themselves with nine days to go before the first-in-the-nation caucuses on Feb. 3.

Surrogates aren't a guaranteed way to sustain excitement or win votes, but the campaigns see it as the best way to maximize their reach in a nominating fight that could turn on the narrowest of margins in Iowa and other early states. A New York Times/Siena College poll released Saturday showed Vermont Sen. Bernie Sanders with a slight edge over the other leading candidates, but the race remains competitive. Several polls show former Vice President Joe Biden, former South Bend, Indiana, Mayor Pete Buttigieg and Massachusetts Sen. Elizabeth Warren still front-runners. 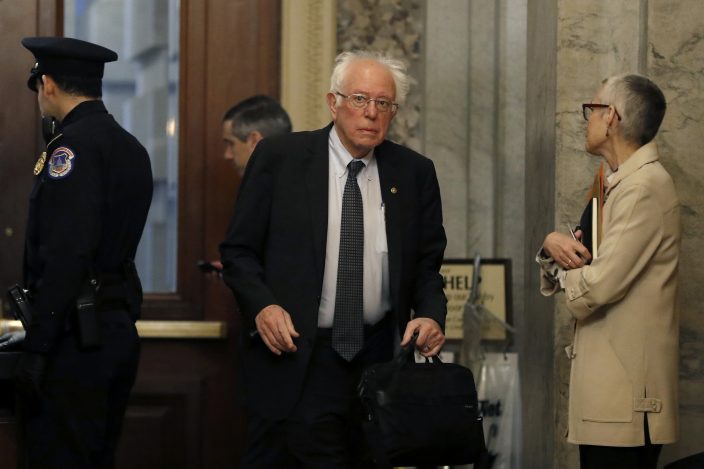 Sen. Bernie Sanders, I-Vt., arrives at the Capitol in Washington during the impeachment trial of President Donald Trump on charges of abuse of power and obstruction of Congress, Saturday, Jan. 25, 2020. (AP PhotoJulio Cortez)

“There’s still plenty of time for movement,” said Kurt Meyer, chairman of the Tri-County Democrats in northern Iowa. “Every part of the ground game counts.”

Biden isn’t bound to the Senate like some of his rivals, but he must navigate the trial nonetheless. House Democrats’ charges that Trump abused his power and obstructed Congress are rooted in the president pressuring Ukrainian officials to investigate discredited theories about Biden’s foreign policy duties in Ukraine as vice president and his son Hunter's personal business dealings there.

Trump’s defense team began its defense of the president on Saturday, with plenty of Biden mentions expected, if not on the floor, then in the hallways as Republican senators try to frame the case to media.

After a brief trip to New Hampshire, the second state to vote in Democrats’ nominating process, Biden planned to return to Iowa on Saturday evening and intended to remain in the state until caucus day. He began the day announcing an endorsement from U.S. Rep. Cindy Axne, who joined her fellow first-term congresswoman from Iowa, Abby Finkenauer, in backing Biden.

Sanders has sent freshman U.S. Rep. Alexandria Ocasio-Cortez, D-N.Y., and filmmaker Michael Moore, both faces of the progressive movement, to Iowa. The senator’s wife, Jane Sanders, and actor Danny Glover are in Nevada, which hosts the third nominating contest.

Warren has Julian Castro, the former Obama housing secretary and onetime presidential candidate, in Nevada. U.S. Rep. Ayanna Pressley, D-Mass., another star of the House freshman class like Ocasio-Cortez, is in South Carolina.

Amy Klobuchar’s daughter has been in Iowa in recent days — with control of her mother’s Twitter account — as the Minnesota senator assumed her role as impeachment juror.

The Senate adjourned about noon EST Saturday, giving the presidential candidates time to return to Iowa for late-afternoon and evening events. Sen. Michael Bennet, D-Colo., was headed to New Hampshire.

The weekend is critical for them, depending on how many more days the trial will extend this coming week. Warren’s campaign on Saturday hit prospective donors with a frank plea ahead of an “important January fundraising deadline.”

Fall short of her financial targets, the campaign wrote, and “we risk having to scale back our advertising plan during the most critical period of this election.”

Pompeo meets with Oman's new ruler amid US pressur ...

US, others pull out of Luge World Cup, citing safety