Maybe he was simply bored by the questions. He certainly was physically and emotionally spent after the longest win of his career. So Nick Kyrgios slumped forward, his crossed arms leaning on a table, as he spoke to reporters in a monotone at the Australian Open.

Until, that is, the subject of his upcoming fourth-round showdown against Rafael Nadal was raised.

That's when Kyrgios sat up at attention and declared: "I'm super-excited, honestly. Playing one of the greatest tennis players on center court at your own Slam -- it's pretty damn cool." 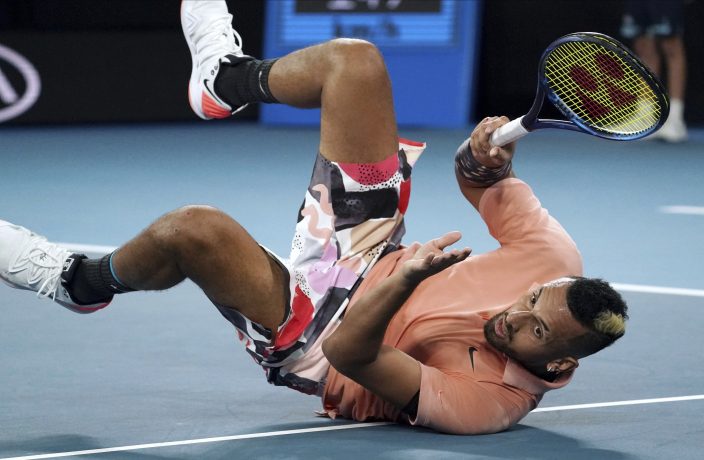 Moments later, he added: "That's why you play, I guess."

It's also why we watch. When the top-seeded Nadal, a 33-year-old from Spain, and the 23rd-seeded Kyrgios, a 24-year-old from Australia, meet at Melbourne Park (it'll be Monday, local time; Sunday night EST), there's no telling what will happen.

"Unquestionably great for the sport," said International Tennis Hall of Fame member Pat Rafter, who won the U.S. Open twice. "The way they both hit the ball will make it a classic."

There's more to it than that, though.

The truth is, tennis needs more of these matchups: Nick vs. Rafa; young vs. old; up-and-comer seeking validation with his first Grand Slam title vs. all-time great trying to equal Roger Federer's record of 20 majors; big serve vs. baseline supremacy; the trick-shot artist vs. the grinder who plays every point like his life depends on it; the do-it-his-way guy who's been fined thousands of dollars and was put on probation by the ATP Tour vs. the say-all-the-right-things, never-in-trouble statesman.

The dichotomies provide an incredibly intriguing aspect of their rivalry, which dates to when a teenage Kyrgios shocked Nadal at Wimbledon in 2014.

And make no mistake: It IS a rivalry. There is some distaste on each side, even if both men sought to make the point that they can't really hate each other too much, given how little they've interacted away from the court.

Yet they exchanged barbs through the media after Kyrgios beat Nadal in Acapulco last year. When they played at Wimbledon in July -- a win for Nadal that gave him a 4-3 head-to-head edge -- Kyrgios ripped a shot right at Nadal's midsection, then refused to apologize.

"It's clear, of course, that when he does stuff that, in my opinion, is not good, I don't like (it). When he plays good tennis and he shows passion for this game, he is a positive player for our tour -- and I want my tour bigger, not smaller," Nadal said. "When he's ready to play his best tennis and play with passion, (he) is one of these guys. When he's doing the other stuff, of course I don't like (it)."

Kyrgios is a showman who says and does things that create drama. Just look at his fifth-set tiebreaker victory over No. 16 Karen Khachanov that lasted nearly 4½ hours Saturday night, with what sounded like all of Australia cheering right along: Kyrgios took a medical timeout for glute pain, bloodied his hand by diving for a ball, argued with the chair umpire over a time violation warning, hit 33 aces, wasted one match point in the third set and another in the fourth and was two points from defeat in the fifth.

Nadal needed less than 100 minutes to win his ho-hum third-rounder, notable merely for how flawlessly he played.

"At the end of the day, we're two different tennis players. We go about it completely different. After Wimbledon (in 2019) -- I lost, I got beaten by the better player -- I shook his hand, looked him in the eye, and said, 'Too good,'" Kyrgios said. "Regardless, if we don't like each other or whatever, I think there's a layer of respect. He's one of the greatest of all time. I also read that he thinks I'm good for the sport. There's a layer of respect that we both have for each other. Doesn't necessarily mean we like each other, but ... we're going to go out there and give contrasting styles and personalities."

Pick one to support. Or don't. Either way, tune in. And enjoy.

Or as 2003 Wimbledon runner-up Mark Phillippoussis put it: "Find a nice comfy couch and get out the popcorn!"

Howard Fendrich covers tennis for The Associated Press. Follow him on Twitter at https://twitter.com/HowardFendrich or email him at hfendrich@ap.org