All-Star guard Trae Young had 39 points and a career-high 18 assists to lead the Atlanta Hawks past Ben Simmons and Philadelphia 127-117 on Thursday night, extending the 76ers' road woes.

Simmons scored 31 points to lead Philadelphia. Shake Milton had a career-high 27 points — 14 more than his previous high — but it wasn't enough to improve the 76ers' poor road record. Philadelphia, 22-2 at home, fell to 9-16 in away games.

John Collins had 17 points and 20 rebounds for Atlanta. 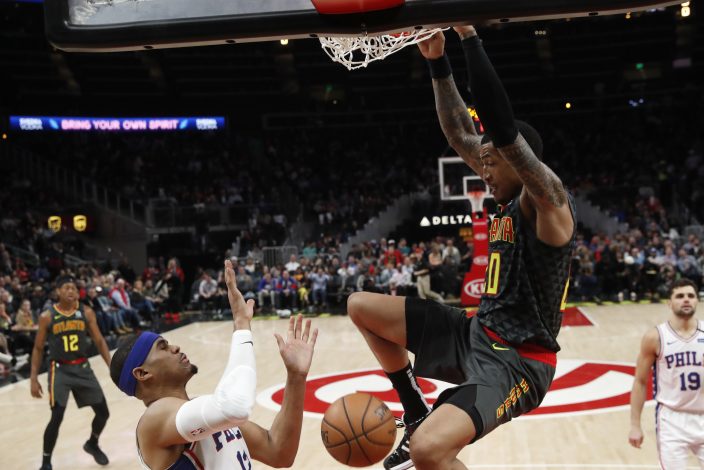 The 76ers, who began the night tied with Indiana for fifth place in the East, held their last lead at 21-20 against the Hawks, who are last in the conference.

Joel Embid had 21 points and 14 rebounds for Philadelphia.

Hawks coach Lloyd Pierce and his assistants wore Kobe Bryant's Nike shoes during the game as their tribute to the retired Los Angeles Lakers great, who was killed Sunday in a helicopter crash.

Norman Powell scored eight consecutive points in the final minute for the Raptors after the Cavaliers cut the lead to 105-104. Powell hit a 3-pointer, scored on a layup after making a steal and sank three foul shots to seal the win.

Cleveland trimmed its deficit to one on three occasions and had a chance to tie the game, but Darius Garland missed the second of two free throws with 1:18 to play, leaving Toronto's lead at 105-104.

Lowry was selected as an All-Star reserve earlier in the day, the sixth time he'll appear in the game. Pascal Siakam, an All-Star starter, scored 19 points and Powell had 16.

Kevin Love and Collin Sexton each scored 23 points for Cleveland, which has lost nine of 10 overall and nine in a row at home.

Marcus Smart added 21 points, 17 in the second half on a night when the Celtics became the latest team to offer a tribute to Kobe Bryant following his death in a helicopter crash.

Jayson Tatum, just selected to his first All-Star Game, returned to the lineup after missing three games with a right groin strain. He finished with 20 points in 24 minutes.

Bradley Beal had 34 points, nine rebounds and nine assists after he was snubbed for an All-Star selection, and Washington topped Charlotte.

Beal, chosen for the All-Star Game the previous two years, failed to make it as a reserve in results that were revealed shortly before game time.

Thomas Bryant had 21 points for Washington, which began a six-game homestand.

President Donald Trump and some of ...

Dan Carter poised for Super Rugby comeback with the Blu ...