Barcelona’s teenage star Ansu Fati set another scoring record on Sunday when he became the youngest player to get two goals in a Spanish league game.

The 17-year-old Fati struck from a pair of passes by Lionel Messi to help Barcelona beat Levante 2-1, keeping the defending champion within three points of leader Real Madrid.

The forward from Guinea-Bissau’s latest scoring milestone comes after he has smashed several scoring marks this season. 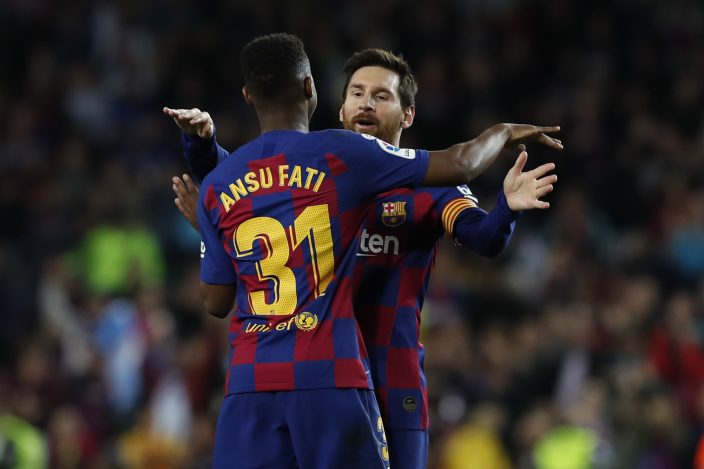 On Sunday, Fati opened the scoring for hosts Barcelona in the 30th minute after Messi drifted back into the midfield circle and placed a perfectly weighted pass to connect with a run behind the defense. Fati did the rest by fending off Jorge Miramón before slotting a right-footed shot between the legs of goalkeeper Aítor Fernández.

A minute later the teenager switched to his left foot to fire in a second goal after Messi found him on the left side of the box. 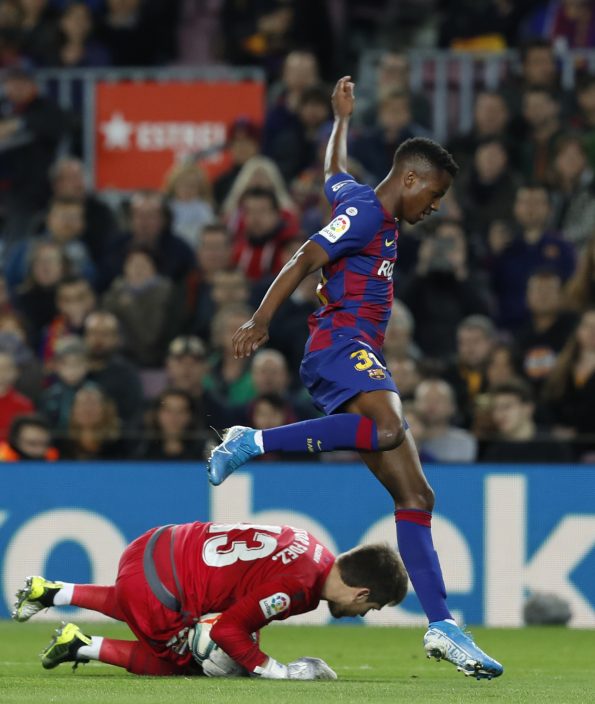 They were his fourth and fifth goals of the season. He has taken a place in Barcelona's starting lineup with Luis Suárez unavailable after right knee surgery.

Rubén Rochina got one back for Levante in stoppage time after the visitors had threatened several times in the second half.

Messi reveled in the high defensive line that Levante tried to use to pressure the hosts. He found right back Nelson Semedo with space to romp moments later. Semedo cut back around two defenders, only for his shot to be denied by the crossbar.

Levante, which beat Barcelona 3-1 at home in November, did better after halftime.

Rochina fired high after an initial save of teammate José Morales’s shot by Marc-Andre ter Stegen in the 53rd. Ter Stegen then palmed a strike by substitute Hernani Santos over the bar in the 67th.

Messi also came close to a goal after he dribbled past two players and drew a save from Fernández.

Levante lost Nikola Vukcevic to injury in the 80th when he was taken off on a stretcher.

While the win will help coach Quique Setién settle in after a tough start replacing Ernesto Valverde, the second half showed he still has work to do to shore up Barcelona's defense.

Barcelona lost 2-0 at Valencia last round, but rebounded midweek with a 5-0 win over Leganés in the Copa del Rey’s round of 16.

Getafe won 2-0 at Athletic Bilbao to rise to third place, moving ahead of Sevilla which drew 1-1 at home with Alavés.

Paco Alcácer had an ideal debut for new club Villarreal, scoring the opening goal in a 3-1 win over Osasuna.

Leganés substitute Óscar Rodríguez scored from a free kick deep in stoppage time to snatch a 2-1 win over Real Sociedad and move the club closer to escaping the drop zone.