Authorities in North Macedonia have filed criminal charges against three Pakistanis and a Macedonian man for allegedly imprisoning a group of migrants and holding them to ransom, officials said Monday.

The prosecutor’s office said the men were believed to have behaved in a “particularly degrading and cruel” manner to the 12 migrants, including two minors, from India, Afghanistan and Pakistan.

They were allegedly detained for two weeks in October in a house in the country's north. The four suspects were arrested last year but the arrests were announced Monday. 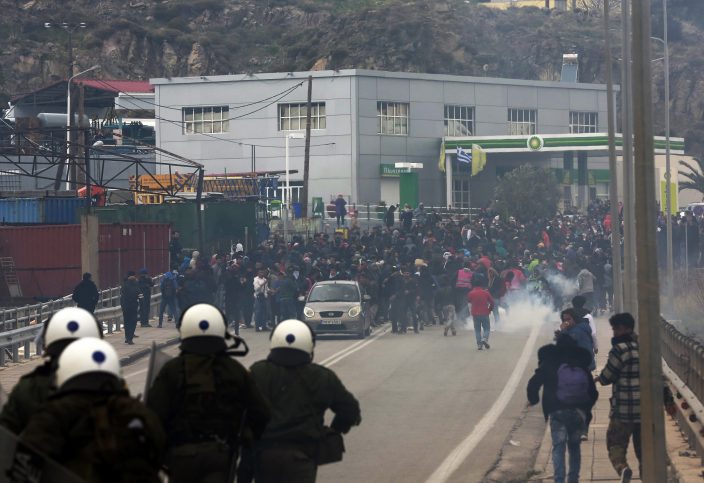 Riot police use tear gas against protesting refugees and migrants during a demonstration on the northeastern Aegean island of Lesbos, Greece, on Monday, Feb. 3, 2020. The clashes broke out after police prevented protesters from reaching the island's main town of Mytilene. The demonstration was held to protest severe overcrowding at the island's refugee camp and delays in the asylum procedure. (Manolis LagoutarisInTime News via AP)

According to the prosecution, the suspects “caused (the migrants) to lose their sense of time, gave them food only once a day and physically abused them.” They also allegedly demanded money from their prisoners' relatives in other European countries and threatened to kill the migrants when they asked to be freed.

One migrant managed to contact relatives who reported the case to Serbian authorities, who in turn informed police in North Macedonia, the prosecutor’s office said.

The three Pakistanis were arrested and are in custody pending trial. If convicted, they face up to eight years in prison. The Macedonian national, who owns the house where the migrants were allegedly being held, has also been charged and is under house arrest. 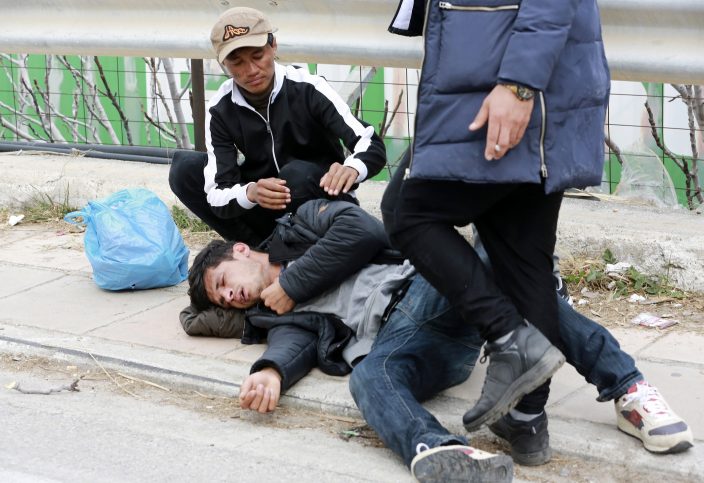 A protesting migrant reacts after riot police used tear gas during a demonstration on the northeastern Aegean island of Lesbos, Greece, on Monday, Feb. 3, 2020. The clashes broke out after police prevented protesters from reaching the island's main town of Mytilene. The demonstration was held to protest severe overcrowding at the island's refugee camp and delays in the asylum procedure. (Manolis LagoutarisInTime News via AP)

North Macedonia is a key stage on the route many migrants take through the Balkans towards prosperous European countries after illegally entering neighboring Greece — mostly on small smuggling boats from Turkey.

On the Greek island of Lesbos, where most of the boats arrive, migrants clashed with police Monday during a protest over severe overcrowding at the local Moria camp and delays in Greece's asylum procedure.

Riot police used tear gas to disperse several hundred protesters who had planned to march from the camp to the island capital of Mytilene, about 5 kilometers (3.1 miles) away. No arrests or injuries were reported.

Also Monday, police in Cyprus said they safely escorted to the coastal town of Larnaca a boat with 87 Syrian migrants that had left from the Turkish port of Mersin and was spotted by radar off island nation's southeastern tip.

The 61 men, 10 women and 16 children were taken to a reception center outside the capital Nicosia.

An online video and messages purpo ...

Modi visits military base close to China amid standoff

Aid ship with 403 migrants rescued off Libya docks in Italy