LeBron James scored 19 of his 36 points in the fourth quarter while hitting five 3-pointers in an incredible three-minute span, propelling the Los Angeles Lakers to a 129-102 victory over the San Antonio Spurs on Tuesday night.

James added nine assists and seven rebounds, and he hit five of his six 3s in that decisive barrage. Anthony Davis and Kyle Kuzma had 18 points apiece as the Lakers beat San Antonio for the third time this season, sweeping the season series.

Kuzma, the subject of numerous trade rumors with the deadline approaching, added 12 rebounds in one of his most impressive recent performances. 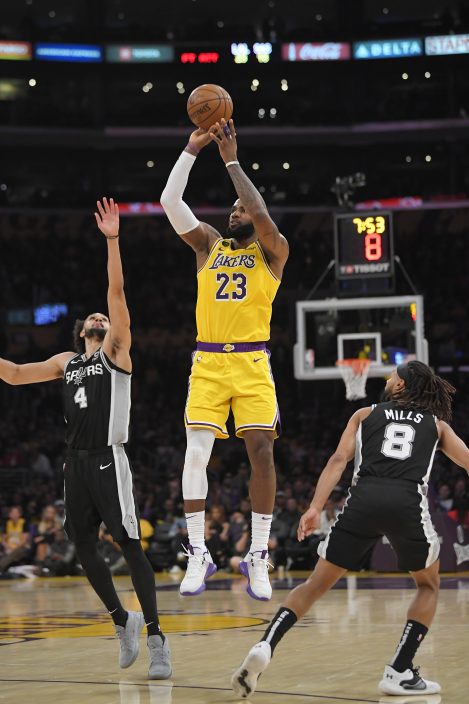 DeMar DeRozan had 28 points, nine rebounds and seven assists in his hometown for the Spurs, who have lost five of seven. 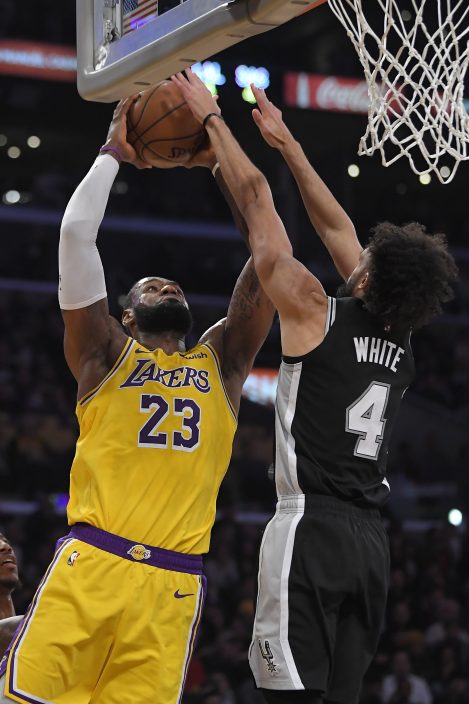 Jokic had 29 points and 13 rebounds as the Nuggets improved to 8-0 against Northwest Division rivals this season. They held Lillard to 21 points, ending his string of eight straight games with at least 30. Lillard was 8 of 23 from the floor, predominantly with Harris and Torrey Craig taking turns shadowing him.

Denver led by 34 in the third, and Jokic was given the final quarter off. The short-handed Nuggets were without Paul Millsap (bruised left knee), Mason Plumlee (right foot) and Michael Porter Jr. (right ankle). Jamal Murray returned to the lineup after missing 10 games with a sprained left ankle. He finished with 20 points.

Giannis Antetokounmpo had 34 points and 17 rebounds in Milwaukee's victory over New Orleans.

Khris Middleton scored 20 for the Bucks, who led by 19 in the third quarter before holding off a Pelicans rally in the fourth.

Brandon Ingram scored 32 points and Zion Williamson had 20 for the Pelicans, who briefly got as close as seven twice in the fourth period before the Bucks stemmed the tide and improved to 20-4 away from home this season.

Williamson was 5-of-19 shooting and New Orleans was minus-11 with its rookie sensation on the court.

James Harden had 40 points and 11 assists, and the short-handed Houston Rockets overcame an early deficit to defeat Charlotte.

Harden finished a rebound shy of a triple-double after also scoring 40 points but falling one assist short of a triple-double in Houston's last game. He's scored at least 35 points in his past three games after struggling through a shooting slump over his previous four.

The Rockets played without starters Clint Capela and Russell Westbrook, who sat out with injuries. The Hornets led early in the fourth quarter before Houston used a 15-2 run to take control.

Miles Bridges and Terry Rozier had 20 points each for the Hornets.