Greek police arrested seven people and were searching for another two on suspicion of planning or carrying out attacks on migrants on the island of Lesbos, authorities said Friday.

Police said five Greeks and two foreigners between the ages of 17 and 24 were arrested Thursday night outside the Moria migrant camp, the largest camp for asylum-seekers in the Greek islands.

Authorities confiscated several homemade wooden bats, a metal rod and a full-face hood. Two minors, one Greek and one foreigner, were being sought as additional suspected participants. 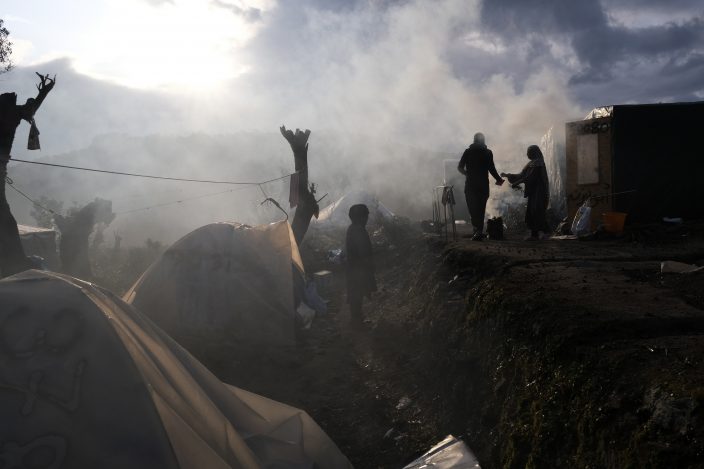 Migrants stand outside their makeshift tents outside the perimeter of the overcrowded Moria refugee camp on the northeastern Aegean island of Lesbos, Greece, Tuesday, Jan. 28, 2020. Greece has been the first point of entry into the European Union for hundreds of thousands of people fleeing war or poverty at home, with most arriving on eastern Aegean islands from nearby Turkey. (AP PhotoAggelos Barai)

More than 19,400 asylum-seekers live in and around Moria, a camp designed to hold just over 2,800 people. The massive overcrowding and dire conditions have led to increasing tension on the island, both among locals and the camp’s residents.

Asylum-seekers have staged demonstrations to demand transfers to mainland Greece. Island residents have held protests and a strike to press the same demand for the removal of migrants.

Under a 2016 deal between the European Union and Turkey, refugees and migrants who arrive on Greek islands from the nearby Turkish coast are held there pending deportation back to Turkey unless they successfully apply for asylum in Greece.