Lauren Marie Young says that after Harvey Weinstein groped her in a Beverly Hills hotel room bathroom in 2013, there was another woman there who did nothing to stop it.

Taking the witness stand at Weinstein’s New York City rape trial last week, Young testified that a Mexican model named Claudia Salinas closed the door behind her and the former movie mogul as they went into the bathroom and “was standing right there” when Young managed to get out.

Young shot Salinas “an evil look, and I left as quick as I could without saying anything,” Young told the jury. 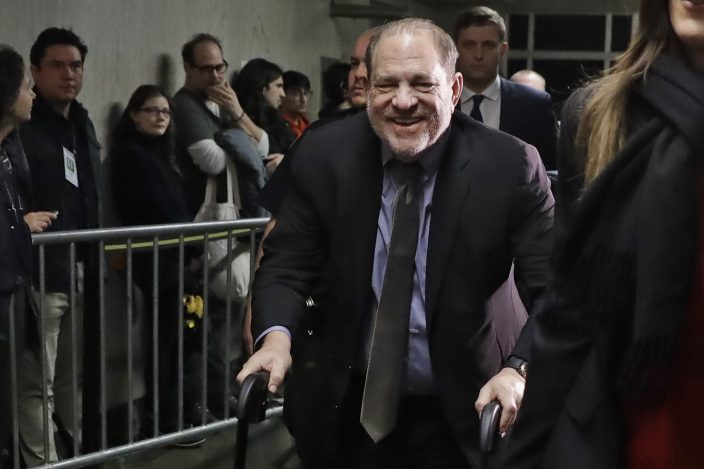 Salinas, now 38, is expected to offer her own version Monday as the latest defense witness in the fourth week of a trial that could see closing arguments by the end of the week. She appeared in the 2009 Weinstein-produced film “Crossing Over” with Harrison Ford.

Weinstein’s lawyers have said they also plan to call two friends of the woman he is charged with assaulting: a Hollywood talent agent and a Brazilian actress who lived with the woman in Los Angeles, who were on the March 2013 trip to New York City where she alleges Weinstein raped her at a midtown Manhattan hotel.

The defense witnesses follow more than two weeks of prosecution testimony, including the accounts of six women who say the once-powerful Hollywood boss subjected them to vile sexual behavior.

Weinstein's lawyers last week used a memory expert, cognitive psychologist Elizabeth Loftus, to try to cement doubts about the women's allegations after cross-examinations that sought to highlight inconsistencies in some of their accounts. In some cases, the encounters the women were recalling happened a decade or longer ago.

False memories “can be experienced with a great deal of detail, a great deal of emotion, even though they’re false,” she told the jury. “The emotion is not a guarantee you’re dealing with an authentic memory.”

Weinstein's lawyers haven't said whether he will testify.

If he does, he faces the prospect of prosecutors grilling him over the allegations and could give them an opening to bring in more witnesses in an attempt to rebut anything he says.

“That is a question that does not have an answer at this point,” attorney Arthur Aidala said. “We want to see how our defense case goes."

Weinstein is charged with raping a woman in a Manhattan hotel room in March 2013 and forcibly performing oral sex on a different woman in 2006.

Weinstein, 67, has maintained any sexual encounters were consensual.

The Associated Press does not typically identify people who say they have been victims of sexual assault, unless they come forward publicly.