When a grand jury revived the criminal case against Jussie Smollett, the indictment for many people called to mind two nights on two different streets in the same big city.

On one Chicago street was a wealthy, famous black man who claimed he was a victim of a racist, anti-gay attack. On the other street was an anonymous black teenager shot 16 times by a white police officer.

A day after Smollett was charged for a second time with staging the attack, the two cases reopened divisive arguments about the role of race and class in the justice system and what fairness looks like. 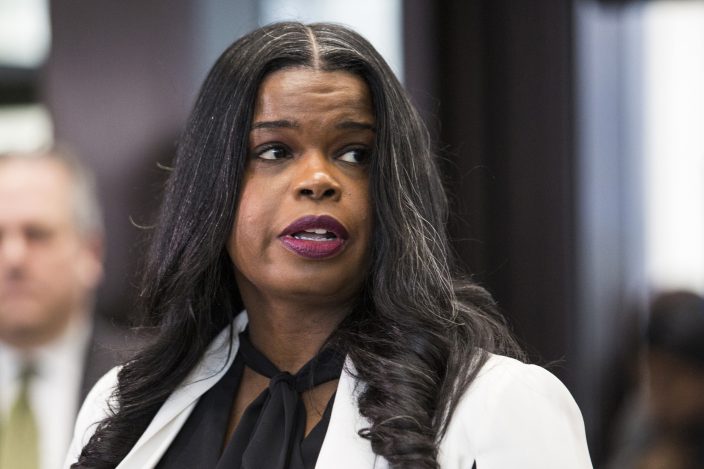 FILE- In this Feb. 23, 2019, file photo, Cook County State's Attorney Kim Foxx speaks to reporters at the Leighton Criminal Courthouse in Chicago. A grand jury revived criminal charges against Jussie Smollett on Tuesday, Feb. 11, 2020, just weeks before an election in which Foxx's opponents are using her handling of the Smollett case against her. (Ashlee RezinChicago Sun-Times via AP, File)

“The integrity of the legal system is at stake,” said David Erickson, a former state appellate judge who teaches at Chicago Kent College of Law. If Smollett "would have walked away, everybody would have thought there is no justice in Cook County."

A special prosecutor decided to prosecute Smollett again, 11 months after county prosecutors dropped charges that the “Empire” actor hired two men to fake the attack to further his career. He has maintained his innocence.

Delmarie Cobb, a local media and political consultant, said she thinks less about Smollett's account of what happened, which she never believed, than about the 2014 fatal police shooting of Laquan McDonald and how it took the city a year to release the dashcam video — only after a judge ordered it — and to charge the officer with murder.

“As a black person, I am insulted by the whole thing and ... all I can think about is 16 counts versus 16 shots,” she said, referring to the number of counts of disorderly conduct that prosecutors originally charged Smollett with.

She wondered about all the anger expressed by former Mayor Rahm Emanuel, former Police Superintendent Eddie Johnson and others who blasted Smollett for lying to police and smearing the city after evidence pointed to a conspiracy to mislead authorities and drum up publicity.

“Where was the outrage when Laquan McDonald was killed in the year before we discovered the video?” she asked.

What is more outrageous, Cobb said, was watching the police department throw dozens of officers working hundreds of hours onto Smollett's case, which involved no injuries, while giving far less attention to the hundreds of shooting deaths elsewhere in the city.

The department, she added, went so far as to track down Smollett's alleged accomplices in Africa while its rate of resolving homicide cases lags far behind other major police forces.

They say special prosecutor Dan Webb's investigation was important because of what happened in the days after Smollett was first charged: Cook County State's Attorney Kim Foxx communicated with a member of Smollett's family at the request of Tina Tchen, Michelle Obama's former chief of staff.

Her actions, critics say, sent a powerful message to anyone who was paying attention.

“This told everyone if you have the right friends, you can get away with it,” Erickson said.

“The last thing a prosecutor should do is take the political temperature of anything and make decisions based on that kind of influence,” said Ron Allen, a professor at Northwestern University's law school. “That's utterly despicable.”

Smollett was accused of stoking racial tensions with his claim that his attackers looped a rope fashioned as a noose around his neck. Erickson and Allen believe Foxx turned the case into a lesson about influence.

Foxx said she recused herself from the matter before her office secured an indictment against Smollett, but she continued to weigh in throughout the case. She has suggested the criticism does have a lot to do with race — her race.

“I have been asking myself for the last two weeks what is this really about?” she said last year after her office dropped the charges. “As someone who has lived in this city, who came up in the projects of this city to serve as the first African American woman in this role, it is disheartening to me ... that when we get in these positions somehow the goal posts change.”

On Wednesday, it was not lost on her that the six-count indictment came just weeks before an election in which Foxx's opponents are using her handling of the Smollett case against her.

“I certainly would hope that the decision in this case was based on the facts, the evidence and the law,” she said.

Marshall Hatch, a prominent minister on the city's West Side, said he thinks the charges are part of a larger effort to siphon enough black votes away from Foxx to cost her a second term. As an example, he pointed to a television ad by one of her opponents that includes a young black woman who says she did not get the same kind of treatment in her criminal case as Smollett did.

Foxx has “done a good job for our community, and now this will be used to kind of muddy her up,” he said.

Check out the AP’s complete coverage of the Jussie Smollett case.