Mississippi Gov. Tate Reeves declared a state of emergency Saturday amid predictions that a river running in the area around the state capital of Jackson could burst its banks and spark widespread flooding.

Forecasters believe the Pearl River will crest at 38 feet (about 12 meters) Sunday evening to levels not seen in decades, following d ays of torrential rains across the Southeast. Reeves said the state should prepare for “the third worst flood” in its history.

“This is a historic, unprecedented flood,” Reeves said via Twitter. 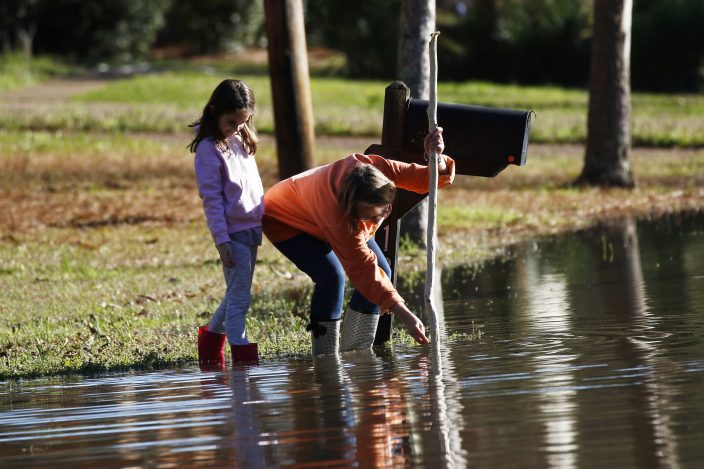 Barbara Beavers marks a pole used to measure the flooding on her street, as her granddaughter McRee Raggio, 7, checks to make sure the measuring is accurate in northeast Jackson, Miss., Friday, Feb. 14, 2020. As of Friday afternoon, the Pearl River was at 35.48 feet, which is more than 7 feet above flood stage. On Sunday, the river is expected to crest at 38 feet. Only twice before has the Pearl River surpassed 38 feet — during the historic floods of 1979 and 1983. (AP PhotoRogelio V. Solis)

Parts of Jackson and suburban Ridgeland were under evacuation orders, and some people had already filled trucks with furniture and other belongings to get out. Reeves said more than 2,400 homes and other structures in and near Jackson could either be inundated or isolated by the rising waters. That includes 1,925 structures in Hinds County, 461 in Rankin County and 31 in Madison County.

“I cannot stress to you how important the next 24 to 48 hours is for the people who are going to be affected,” Reeves said. He signed an emergency declaration to speed up spending for flood response and recovery. More than 96,000 sandbags had already been distributed by Saturday. The National Guard, the Highway Patrol and other high-water rescue teams were on standby, Reeves said. 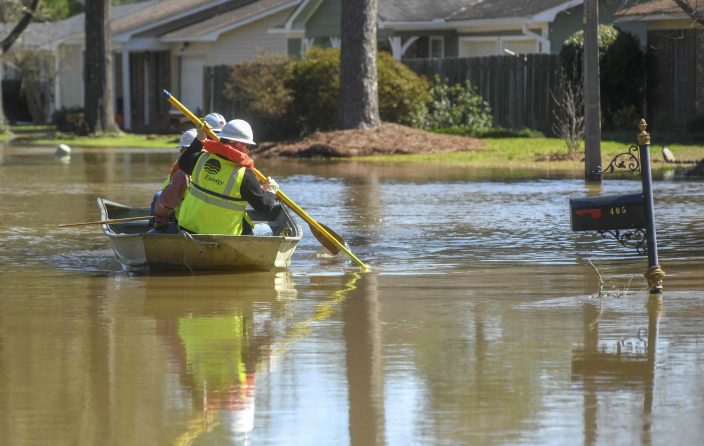 Energy workers use a boat to turn off power in flooded houses in the Canton Club Circle subdivision in northeast Jackson, Miss., Saturday, Feb. 15, 2020. (Cam BonelliHattiesburg American via AP)

Although the sun was shining Saturday in central Mississippi, Reeves and Mississippi Emergency Management Agency director Greg Michel said people in low-lying areas should not be complacent about leaving because the river was expected to crest at night and remain high for days, with rain in the forecast Sunday and Monday.

“Do not wait until water gets into your house to evacuate,” Michel urged.

Officials were bracing for what could be the worst flooding in Jackson since 1983. Nicholas Fenner, a meteorologist with the National Weather Service in Jackson, said the Pearl River crested at 43.2 feet on April 17, 1979 — its highest level. The second highest level occurred May 5, 1983, when the river got up to 39.58 feet. He also said there was between $500 million and $700 million worth of damage in 1979, which saw 15,000 people evacuated. 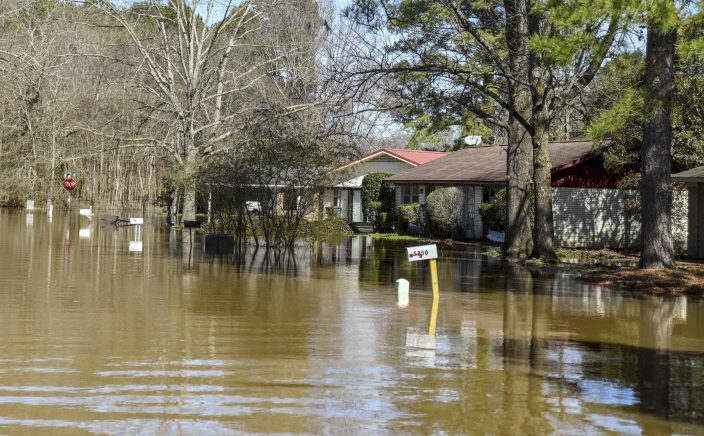 The area is currently under blue skies, but Fenner warned residents against complacency.

“Ëven though the weather has improved, the water will be rising soon. Don’t get lulled into a false sense of security,” he said.

Meanwhile, the Ross Barnett Reservoir is approaching capacity, which led officials to announce that they would begin slowly releasing water at 6 p.m. Saturday. WLBT-TV reported the move is one of the efforts to keep flooding to a minimum downstream, and to allow extra time for residents to get to higher ground.

John Sigman manager of the Pearl River Water Supply District had a phone conference with the National Weather Service and the Army Corp of Engineers on Friday. They said that areas north of the main lake have crested and were beginning to fall and described that as good news.

The crest at the reservoir is now expected Sunday morning. Officials told the television station they are holding their outflow right now at 65,000 cubic feet per second and will hold there for 48 hours, giving people downstream time to get out.