Progressive firebrand Bernie Sanders jabbed his more moderate rivals on Saturday for taking campaign cash from billionaires as Democratic officials at some sites across Nevada were overwhelmed by long lines on the first day of early voting in presidential caucuses.

Sanders, who has emerged as a front-runner in the 2020 nomination fight after strong finishes in Iowa and New Hampshire, went on the offensive during a rally at a suburban Las Vegas high school.

“Democracy is not candidates going to the homes of billionaires raising money," he charged in a thinly veiled attack against competitors like Joe Biden and Pete Buttigieg, who have aggressively courted wealthy donors over the past year. Buttigieg met with donors behind closed doors in Seattle at roughly the same time Sanders made the comments. 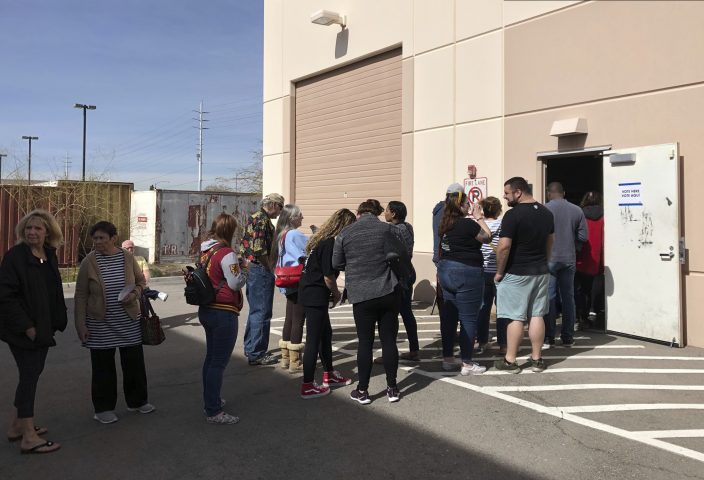 Democratic caucus-goers wait more than an hour in line in an early caucus ballot precinct site at an AFL-CIO union office in Henderson, Nev., Saturday, Feb. 15, 2020. Voters filled out ballots with first, second and third choice picks, to be tallied Saturday, Feb. 22, in the Nevada Democratic Party caucus. (AP Photo by Ken Ritter)

While Nevada's formal presidential caucuses are still a week away, Democrats began casting votes at more than 80 locations across the state on Saturday. Nevada Democrats are hosting four days of early voting for its caucuses, the first test of a candidate’s appeal before a diverse population with strong labor unions.

In northern Nevada's Washoe County, a line of more than 300 people snaked through aisles of book shelves at a public library as another 100 queued up at the county party's headquarters. Dozens left without voting. 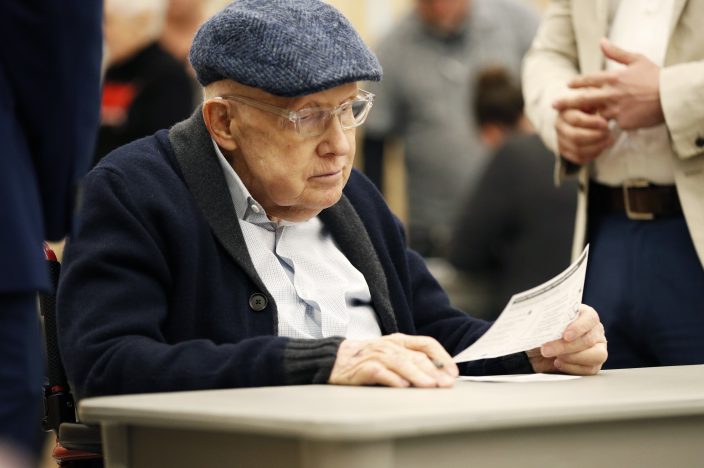 A spokeswoman for the Nevada Democrats, Molly Forgey, downplayed any concerns related to the large early turnout.

“We are happy to see the number of energized Democrats participating in our first ever early voting period,” she said, noting that early voters have four days to participate. “Our volunteers and staff are working to make every site runs as efficiently as possible and to ensure every voter gets to make their voice heard.”

Early votes cast on paper ballots will be added to in-person caucus votes made on Feb. 22, when Democrats will attend about 2,000 precinct meetings around the state.

This year, with the results of Iowa's caucuses muddled by technology and reporting problems, Nevada is under heavy pressure to pull off a problem-free caucus. The Nevada State Democratic Party abandoned its plans to use an app like the one that caused trouble in Iowa and has scrambled to come up with a new system to tabulate results.

Amid heightened concern over the process, several candidates were making urgent get-out-the-vote pushes with rallies and town halls ahead of a fundraising gala for the Las Vegas-based Clark County Democratic Party to feature a half-dozen White House hopefuls.

Biden, looking to Nevada's diverse electorate to help revive his campaign after weak finishes in Iowa and New Hampshire, seized on President Donald Trump's hard-line policy and incendiary rhetoric on immigration as he courted voters.

"Everybody knows how Donald Trump is. We gotta let him know who we are," Biden said, drawing a roar from about 100 campaign volunteers gathered at a Las Vegas middle school gymnasium for a Latino organizing event.

Biden thanked the volunteers, emphasized the importance of the Latino vote and touted his relationships with unions. He later told reporters that he didn't need to win Nevada's caucuses to mount a comeback.

"I just have to do well," the former vice president said when asked what he needs out of the state. Asked whether he has to win, he replied, “No, I don't think I have to, but I think we have a shot at winning.”

Former Sen. Harry Reid, an icon in Nevada's Democratic politics, told reporters that “people should not be counting Joe Biden out of the race yet,” but also offered warm words for Sanders' candidacy. When asked he downplayed concerns from some Democrats that Sanders might hurt other candidates should he become the nominee.

“I care a great deal about Bernie Sanders. And he has gotten where he has by having people support him," said the 80-year-old Reid. “And so I’m not going to be critical of Bernie Sanders.”

The Massachusetts senator pitched her universal childcare plan as she addressed about 30 people, mostly women, at a downtown Las Vegas reggae and cocktail bar. After being introduced by actress Yvette Nicole Brown, Warren said her childcare plan would be paid for by a wealth tax of 2 cents on every dollar for fortunes of more than $50 million.

“It's good for our babies,” Warren said. “Think about what it means for every mama. Every mama who can now finish her education, even if she's just had a baby. Every mama and every daddy who could take a job.”

Bloomberg, who isn't competing in Nevada as part of a strategy to skip the first four states voting for a nominee, was on the cusp of qualifying for Wednesday's presidential debate in La Vegas. He's increasingly become a target of the Democratic Party's far-left wing as national polls show suggest he is on the rise.

Both Warren and Sanders criticized the role of big money in politics and billionaires seeking the presidency. Bloomberg and Tom Steyer are in that category.

“Democracy is not billionaires spending hundreds of millions of dollars trying to get elected. Democracy is when working people stand up, fight for justice," Sanders declared.

The campaign of Bloomberg, who was set to campaign Saturday in Virginia, announced the opening of seven new campaign offices in Florida, bringing the total to 10. The former New York mayor has more than 2,000 paid staff spread out across the nation and has already spent over $300 million on TV, radio and digital advertising, according to the ad tracking firm Advertising Analytics.