Josh Archibald scored his second goal of the game in overtime, NHL points leader Leon Draisaitl had a goal and two assists, and the Edmonton Oilers beat the Carolina Hurricanes 4-3 Sunday.

Draisaitl set up Archibald's goal 3:57 into overtime for his 95th point of the season. Kailer Yamamoto also scored for Edmonton, and Mike Smith had 28 saves.

Sebastian Aho had two goals and an assist for Carolina, including a tying goal with 5:02 left in the third period. 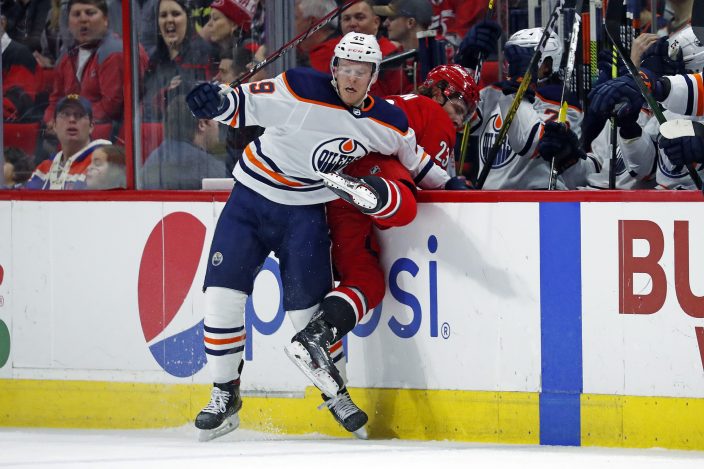 Edmonton scored twice in a 28-second span in the second period for a 3-2 lead. Yamamoto scored after Draisaitl’s shot deflected off Joel Edmundson during an Edmonton power play, and Archibald tallied after a Carolina turnover.

James Reimer stopped 20 shots for Carolina, which outshot the Oilers 10-3 in the third period.

The Hurricanes took a 2-1 lead 5:19 into the second period on a breakaway goal by Aho. He beat Smith after a feed by Jaccob Slavin, who had two assists. Carolina Hurricanes' Sebastian Aho (20), of Finland, celebrates his goal against the Edmonton Oilers during the second period of an NHL hockey game in Raleigh, N.C., Sunday, Feb. 16, 2020. (AP PhotoKarl B DeBlaker)

The Hurricanes took the lead 12 seconds in on Trevor van Riemsdyk’s first goal of the season. Edmonton, which owns the league’s top power play, scored about six minutes later, just at the expiration of a penalty by Carolina. Draisatl snagged a loose puck off the skate of Slavin and fired past Reimer for his 34th goal of the season.

Edmonton is 3-1 without star Connor McDavid, who was placed on injured reserve last week with a quadriceps injury.

NOTES: Aho’s first-period assist gives him points in nine consecutive games. He played his 300th career game Sunday. ... Edmonton improved to 6-0 on the second game of back-to-backs this season, including 5-0 on the road. ... Tyler Benson’s assist on Archibald’s goal was his first NHL point. ... Carolina won the teams’ first meeting 6-3 in Edmonton. Edmonton Oilers' Alex Chiasson (39) has his shot turned away by Carolina Hurricanes goaltender James Reimer (47) during the second period of an NHL hockey game in Raleigh, N.C., Sunday, Feb. 16, 2020. (AP PhotoKarl B DeBlaker)

Edmonton: At home against Boston on Wednesday.

Carolina: At Nashville on Tuesday. 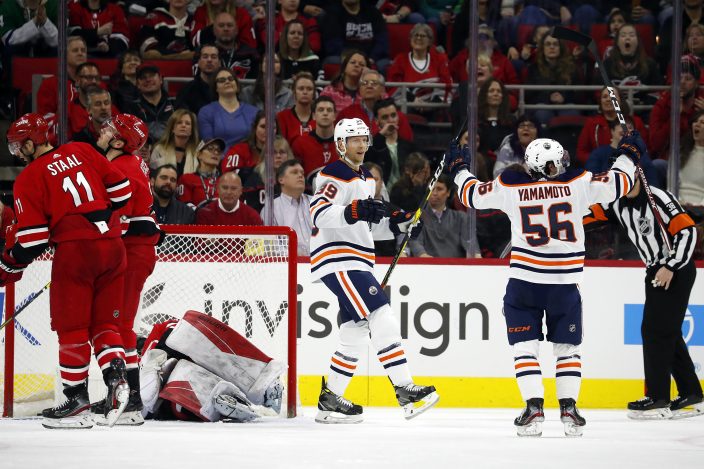 Edmonton Oilers' Sam Gagner (89) congratulates teammate Kailer Yamamoto (56) on his goal against the Carolina Hurricanes during the second period of an NHL hockey game in Raleigh, N.C., Sunday, Feb. 16, 2020. (AP PhotoKarl B DeBlaker)