The Champions League returns this week with the start of the knockout stage.

Here's a look at the first-leg matches in the round of 16:

Liverpool couldn’t really be in better shape in its bid to become only the second team in Champions League history to successfully defend the title. 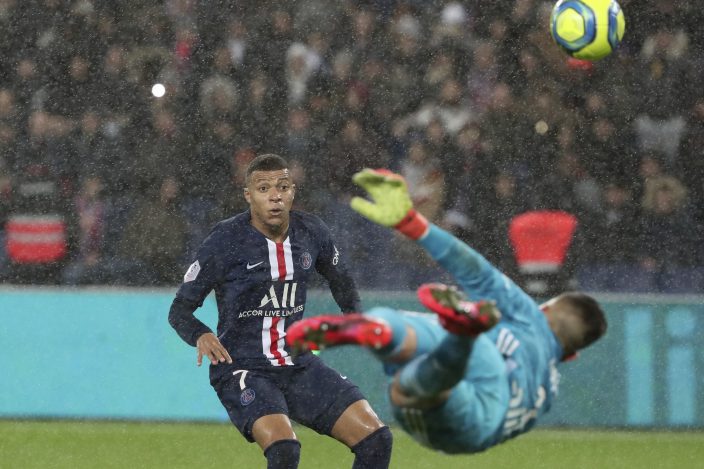 Lyon's goalkeeper Anthony Lopes leaps for a save in front of PSG's Kylian Mbappe during the League One soccer match between Paris Saint Germain and Lyon at the Parc des Princes stadium in Paris, Sunday, Feb. 9, 2020. (AP PhotoThibault Camus)

The team is in fantastic form, dropping only two points in the Premier League all season. The injury issues are also clearing up, with the likes of Fabinho and Joel Matip returning after long-term problems and Sadio Mane back again after a recent hamstring complaint. Then there’s the schedule which - through its domestic dominance - makes juggling Champions League commitments more straightforward. Liverpool is likely to have its first English league championship in 30 years secured before the start of the Champions League quarterfinals, allowing manager Juergen Klopp to prepare his key players for the European competition.

So, get past Atletico Madrid in the last 16 and things will look ominous for Liverpool’s rivals. This is not the feared Atletico of old, either, after its biggest squad revamp under coach Diego Simeone last season. Still defensively solid, Atletico has been fairly ineffective in attack following the sale of Antoine Griezmann, with João Félix - an arrival for 120 million euros ($133 million) last offseason - failing to meet expectations. The team is well off the pace in the Spanish league and was recently beaten by third-division opposition in the Copa del Rey. Liverpool will start as the big favorite.

Paris Saint-Germain coach Thomas Tuchel has genuine concern heading into a showdown against his old club. Neymar has missed four matches with a rib injury and, if he does play in Germany, will be lacking game time. The other worry is the defending, which has been poor in the matches Neymar's missed. Perhaps his presence up front, where he has been in fine form alongside Kylian Mbappé, has been masking deficiencies at the back.

Given Saturday's poor performance in a 4-4 French league draw at Amiens — a team struggling in 19th place, no less — Dortmund's forwards must be hoping to tear into PSG's back four, which is led by the 35-year-old Thiago Silva. He had one of his poorest games in memory against Amiens. Silva was regularly turned and beaten for pace. Tuchel showed mercy by taking him off at halftime. Tuchel will still likely pick him on Tuesday alongside the vastly more reassuring presence of Marquinhos. PSG is under intense pressure to beat Dortmund, having been knocked out at this stage for the past three years and having never been beyond the quarterfinals since its lone semifinal appearance in 1995. With Mbappé and Neymar — even half fit — and a strong supporting cast of Angel Di Maria, Mauro Icardi and Edinson Cavani, PSG has the firepower to unlock any defense. Not least Dortmund's, which has shipped goals this season.

But Dortmund's attack, while not as star-studded, is rampant. Friday's 4-0 home win against Eintracht Frankfurt made it 24 goals in six games. Silva must be having nightmares at the thought of 19-year-olds Jadon Sancho and Erling Haaland running at him. And lurking behind them, there's skillful schemer Marco Reus to deal with.

If Atalanta concedes first on Wednesday, don’t write the Italian team off. Atalanta is developing a reputation as the comeback kings. The team again fought back from a goal down to beat Roma 2-1 on Saturday and remain fourth in Serie A. Since Gian Piero Gasperini took charge in 2016, Atalanta has picked up 71 points from losing positions, more than any other team in Europe’s top five leagues.

That never-say-die attitude has also been reflected in its first season in the Champions League. Atalanta took its time to get used to playing in the prestigious tournament and lost its opening three matches — two of them by four-goal margins. However, it turned things around and impressively held Manchester City to a draw before winning its next two matches to reach the knockout stages.

Much of Atalanta’s success has been down to its scoring prowess. It has scored 63 goals in 24 league matches this season, more than any other team in Serie A. And it has done that without its best forward as Duván Zapata missed two months with injury. The Colombian international returned in January and has already netted twice. Valencia has conceded 34 league goals this season, more than any other team in the top 10 of the Spanish standings. Friday’s 2-2 draw at home to Atlético Madrid extended its winless run to three matches in all competitions.

Does Jose Mourinho still have enough of his old magic to get Tottenham back into the final? The odds are against it, but never discount a two-time Champions League-winning coach. Mourinho is slowly putting his stamp on Tottenham after nearly three months in charge, getting results in spite of some lackluster performances. See, for example, the 2-0 home win over Manchester City in the Premier League last month, despite being under almost constant pressure. Spurs could easily have got something out of their home game against unbeaten Liverpool, too, in December.

Under Mourinho, Tottenham has gone from languishing midtable to getting close to the Champions League positions despite barely keeping a clean sheet and having key players like Harry Kane out through injury. In the Champions League, Mourinho will relish being the underdog, with little really expected of Tottenham in the knockout stage.

The matchup with Leipzig, which is in the knockout stage for the first time, is a hard one to call, though. The German team is in a tight title fight with Bayern Munich in the Bundesliga, although its recent results have been mixed. Mourinho’s experience could yet be the decisive factor.