Markets were mixed in Asia on Monday, with Japan's benchmark slipping 0.8% after the government reported the economy contracted 6.3% in annual terms in the last quarter. China's shares got a boost after the central bank stepped in to help the economy with a rate cut, extra buying of securities and tax cuts.

The Shanghai Composite index jumped 1.3% to 2,955.07 after the central bank and finance minister announced a slew of measures to support the economy as the country battles an outbreak of a new virus that has killed 1,770 people and infected nearly 70,000. 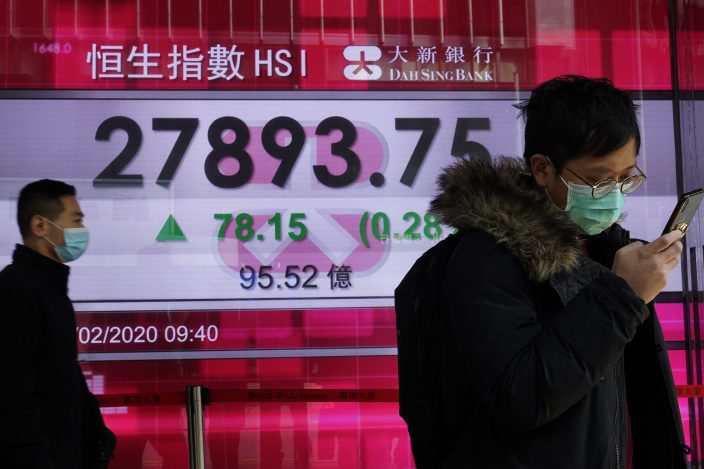 People walk past a bank electronic board showing the Hong Kong share index at Hong Kong Stock Exchange Monday, Feb. 17, 2020. Markets are mixed in Asia, with Japan's benchmark slipping 0.8% after the government reported the economy contracted in the last quarter. (AP PhotoVincent Yu)

Shares fell in Taiwan and were flat in Bangkok and Jakarta.

The contraction in the Japanese economy, the world's third-largest, reflected the impact of typhoons, trade tensions and crimped consumer spending. The seasonally adjusted economic data was announced as Prime Minister Shinzo Abe faces pressure over spreading cases of the new viral illness COVID-19 and markets around the region see a mounting toll from its impact on travel and tourism as authorities strive to contain it.

“Consumer spending, which slumped following the tax hike in the fourth quarter of 2019, will now struggle to do anything except contract further in the first quarter as the impact of Covid-19 weighs on consumer sentiment, weighing in particular on the consumer services sector," ING said in a report. 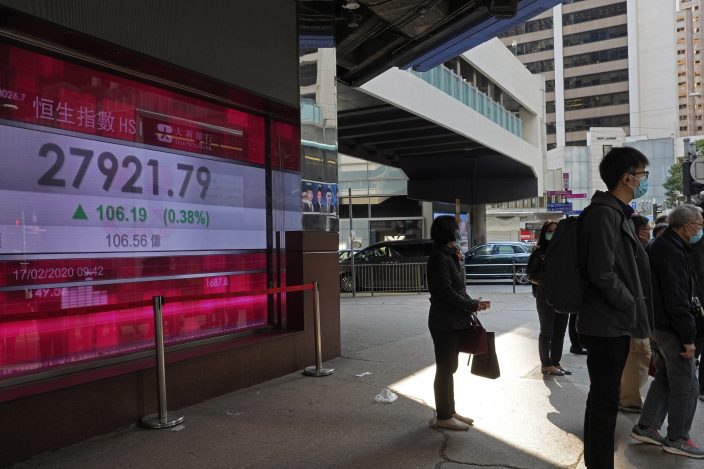 People stand in front of a bank electronic board showing the Hong Kong share index at Hong Kong Stock Exchange Monday, Feb. 17, 2020. Markets are mixed in Asia, with Japan's benchmark slipping 0.8% after the government reported the economy contracted in the last quarter. (AP PhotoVincent Yu)

“Some further government spending may help to curb any further contraction in GDP beyond 1Q20. But that will not stop what started off as a technical downturn from evolving into a full-blown recession," it said.

Thailand and Singapore also reported weak growth in the last quarter of 2019, in figures that like Japan's do not yet reflect the consequences of the coronavirus outbreak.

But good news came in the form of fresh help from the People's Bank of China, which cut its one-year medium-term lending rate to 3.15% from 3.25%. The central bank also injected some 200 billion yuan ($28.6 billion) and conducted 100 billion yuan ($14.3 billion) in reverse repos, in effect putting more cash into the market through short-term purchases of securities.

Such moves will likely be followed by still more, said Julian Evans-Pritchard, given that many of the companies worst affected by the virus outbreak are smaller ones that lack access to loans from major state-run banks.

“We think the PBOC will need to expand its re-lending quotas and relax constraints on shadow banking in order to direct more credit to struggling SMEs,” Evans-Pritchard said in a commentary.

Wall Street closed out a wobbly day of trading Friday with the major stock indexes notching their second straight weekly gain. Though trading was mostly subdued and cautious following China's report Thursday of a surge in cases of a new virus that raised fresh concerns about global economic growth.

Technology companies led the gainers Friday. Chipmaker Nvidia was a standout, jumping 7% after it handily beat analysts’ profit forecasts for the fourth quarter.

The slide in oil prices has weighed on energy stocks. The sector is the biggest loser in the S&P 500, down 10.2% so far this year.

More than three quarters of S&P 500 companies have reported earnings and the results so far show solid growth. Companies are expected to report overall profit growth of just under 1% when all the reports are in, according to estimates from FactSet.

Several big companies are on deck to report results next week. Walmart will release its report on Tuesday and Deere will report on Friday.

On Wednesday, the government will issue its report on producer prices, which measures inflation pressures before they reach consumers and there will be updates on the health of the housing industry. The Federal Reserve will release minutes from its January meeting.