Japan is transferring a 27-year-old ship to Indonesia and providing funds to upgrade its coast guard to better guard against poaching in its South China Sea fisheries amid recent Chinese incursions. 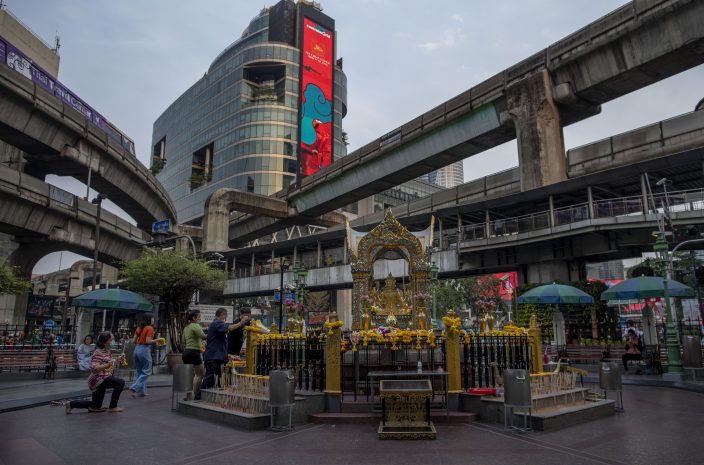 In this Feb. 4, 2020, photo, only a few devotees gather at Erawan shrine, usually congested with Chinese tourists in Bangkok, Thailand. The coronavirus outbreak that originated in China has battered the tourism industries of nations in Southeast Asia that have grown dependent on travelers from China, where rapidly growing incomes have led to a global tourism boom. (AP PhotoGemunu Amarasinghe)

Japan was providing the 741-ton Hakurei Maru as its efforts to promote its “free and open Indo-Pacific strategy,” Kazuhiko Shimizu, economic counselor at the Japanese Embassy in Indonesia, was quoted as telling reporters on Friday.

China insists Chinese fishermen are free to conduct activities in their “traditional fishing ground,” which partly overlaps with Indonesia's exclusive economic zone around its Natuna island group. Chinese fishermen have since December operated in the area, escorted by boats from the Chinese coast guard.

The U.S. Air Force sent a plane through the Taiwan Strait along with two B-52 bombers off the island's east coast, in apparent response to Chinese aircraft flying across the unofficial line dividing the island and mainland.

Shortly before then, Taiwan's military scrambled fighter jets to intercept Chinese aircraft that crossed the dividing line in the strait and flew over the Bashi Channel dividing Taiwan from the Philippines. Chinese fighters, bombers and other planes have circled the island on what Beijing calls training missions, but the pattern of behavior also is a warning to the independence-minded government of the island China claims as its own territory and which it threatens to annex by force if necessary.

The U.S. government denounced the Chinese actions as inappropriate. While the U.S. does not have official diplomatic relations with Taiwan, it is bound by U.S. law to treat threats to the island as matters of grave concern and is its main source of Taiwan's military hardware.

Taiwan has banned entry to all travelers from mainland China because of the viral outbreak that began in China and has sicked 20 people in Taiwan and caused one death.

The Philippines has endangered its 69-year-old security treaty alliance with the U.S. after moving to end a major security pact allowing American forces to train in the country.

The government of President Rodrigo Duterte said Tuesday it planned to terminate the Visiting Forces Agreement, effective in 180 days unless both sides agree to keep it.

Duterte has often criticized U.S. security policies while praising those of China and Russia despite the Philippine military’s close historic ties with its American counterpart.

U.S. Secretary of Defense Mark Esper called the action “unfortunate” and that it would be a “move in the wrong direction." Esper said that when he visited the Philippines last November he thought the relationship was on a strong footing.

Duterte threatened to terminate the security agreement after Washington reportedly canceled the U.S. visa of a loyal ally, Sen. Ronald dela Rosa, who was linked to human rights violations when he first enforced the president’s deadly anti-drug crackdown as the national police chief in 2016.

Abrogating the 1998 security accord with Washington would undermine Philippine security and foster aggression in the disputed South China Sea, where the U.S. military has been seen as a crucial counter-presence to China.

The coronavirus outbreak that originated in China has battered the tourism industries of Southeast Asia.

While the impact is worldwide, the loss of those tourists is being felt most acutely in Asia, which usually attracts 75% of Lunar New Year travelers, says ForwardKeys, a travel consulting company. The new year, which began Jan. 25, is one of China’s major travel periods.

“The day that we heard the news (about the virus), the tourists were gone,” said Arisara Chamsue, who runs a shop near the Grand Palace in Bangkok. "The number has dropped. And I can only make a tenth or two tenths of what I normally make."

Thirty airlines have suspended service to China and 25,000 flights were canceled in just last week alone, according to OAG, a travel data company.

Chinese tourism and financial loans and investment have been seen as weakening the willingness of some countries to confront China's aggression in the South China Sea, as well as driving a wedge between members of the Association of Southeast Asian Nations.

Even with major leaguers likely to ...