VATICAN-LEGION OF CHRIST — Five suspects are scheduled to be tried next month in the latest case against the disgraced Legion of Christ religious order. They're charged with trying to obstruct justice and to extort the family of a young man who was molested by a priest when he was 12. As part of the scheme, the accused offered the family 15,000 euros if he would tell authorities that the abuse never happened. The cardinal who was sent by the order to clean up the Legion told the boy's mother that the settlement offer was just the way it's “done in Italy.” By Nicole Winfield and Maria Verza. SENT: 2,650 words, photos, 1,200-word abridged version. This is the Tuesday spotlight. 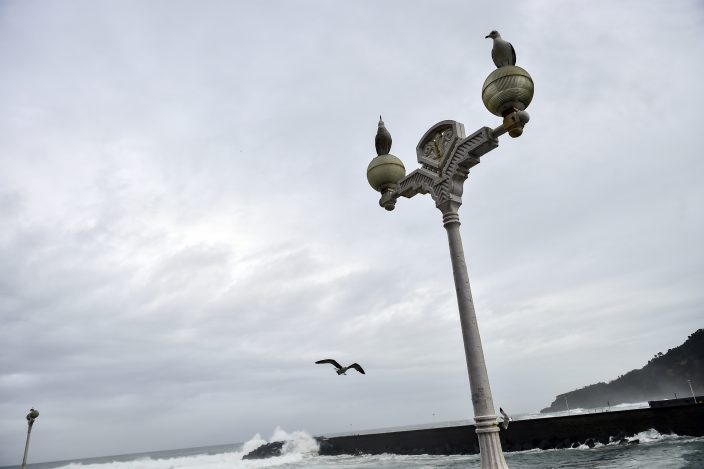 Seagulls stand on the top of a streetlight during a high tide in San Sebastian, northern Spain, Monday, Feb, 17. 2020, 2019. Spain experienced high winds and heavy rain as a storm reached the northern Iberian Peninsula from the Atlantic. (AP PhotoAlvaro Barrientos)

CHINA-OUTBREAK-QUARANTINED AMERICANS — More than 300 American cruise ship passengers, including 14 who tested positive for the new virus that has been spreading in Asia, were being quarantined at military bases in California and Texas on Monday after arriving from Japan on charter flights overnight. SENT: 730 words, photos. Developing. WITH: JAPAN-OUTBREAK-SHIP — Japanese officials have confirmed 99 more people infected by the new virus aboard the quarantined cruise ship Diamond Princess, bringing the total to 454. SENT: 230 words, photos.

CHINA-OUTBREAK — China says it may postpone its annual congress in March, its biggest political meeting of the year, because of the virus outbreak. The standing committee for the National People’s Congress says it believes it is necessary to postpone the gathering to give top priority to people’s lives, safety and health. The announcement came as the military dispatched hundreds more medical workers and extra supplies to the city hit hardest by a 2-month-old outbreak. By Yanan Wang. SENT: 810 words, photo. WITH: CHINA-OUTBREAK-AT A GLANCE (SENT) ; CHINA OUTBREAK-AUTOMAKERS - Automakers are reopening factories in China that were idled by anti-virus controls as they try to reverse a sales slump in their biggest market. SENT: 470 words, photos.

SYRIA — Syrian President Bashar Assad congratulated his forces for consolidating control over the entire province of Aleppo in northern Syria, pledging to press ahead with a military campaign to achieve complete victory “sooner or later.” Assad, who rarely appears in public, pledged in a televised address that the onetime economic hub of Aleppo, the provincial capital, will “return stronger than it was before.” By Albert Aji and Zeina Karam. SENT: 1,100 words, photos.

CHINA-FORBIDDING FAITH — A database obtained by The Associated Press exposes in extraordinary detail the main reasons for the detentions of Uighur imam Memtim Amir, his three sons, and hundreds of other Muslims in Karakash County: Their religion and their family ties. Taken as a whole, the information offers the fullest and most personal view yet into how Chinese officials decided who to put into and let out of detention camps, as part of a massive crackdown that has locked away more than a million ethnic minorities. By Dake Kang. SENT: 1,600 words, photos. With CHINA-FORBIDDING FAITH-ABRIDGED. 970 words, photos.

DAYTONA 500 - The Daytona 500 is set to resume under clear skies and without President Donald Trump. The race on Sunday was postponed a day for just the second time in 62 years after it rained moments following after Trump's ceremonial pace lap. The rain dampened a hyped season opener with a visit from Trump that energized the sold-out crowd. But his presence brought heightened security and long lines, and the mood soured when the race was delayed. By AP Auto Racing Writer Jenna Fryer. SENT. 600 words, photos. DEVELOPING: The race will now begin at 4 p.m. Monday.

FACT CHECK-WEEK — President Donald Trump is misrepresenting the Justice Department's handling of the legal case of his confidant and spreading a variety of other distortions, including about the border wall and voter fraud. By Hope Yen and Calvin Woodward. SENT: 2,400 words, photos.

EUROPE-STORM — Britain issued severe flood warnings, advising of life-threatening danger after Storm Dennis dumped weeks' worth of rain in some places. One woman swept away by the floodwaters was feared dead. SENT: 600 words, photos.

AFGHANISTAN-REFUGEES — After 40 years of wars and conflict, more than 1.5 million Afghan refugees still live in neighboring Pakistan. They feel abandoned by their own government, increasingly unwelcome in their reluctant host country and ignored by the U.N. But for the first time in years, there’s a faint hope of returning home. SENT: 1,040 words, photos.

BRITAIN-GOVERNMENT ADVISER — British Prime Minister Boris Johnson was under pressure to fire an adviser who has linked intelligence to race and suggested contraception should be made compulsory to avoid “a permanent underclass.” SENT: 400 words, photos.

BURKINA FASO-KILLINGS — Gunmen killed 24 civilians, including a church pastor, and kidnapped three others on Sunday in Burkina Faso, an official said. It was the latest attack against a religious leader in the increasingly unstable West African nation. SENT: 320 words

KASHMIR-UK-VISA — Indian officials have denied a British lawmaker entry after she landed at New Delhi's Indira Gandhi International Airport. An accompanying aide told The Associated Press that Debbie Abrahams, a Labour Party Member of Parliament who chairs a parliamentary group focused on the disputed region of Kashmir, was unable to clear customs after her valid Indian visa was rejected. SENT: 580 words, photos.

INDIA-WOMEN IN ARMY — India’s top court has ordered the government to grant permanent commission and command positions to female officers in the army on par with men, asserting that the government's arguments against the policy were based on gender stereotypes. SENT: 370 words.

BURUNDI-MASS GRAVES — Authorities in Burundi say they have opened six mass graves containing more than 6,000 bodies from unrest that occurred decades ago, the largest such discovery in years of work. SENT: 300 words, photos.

VIRGINIA GUN LAWS — Virginia Gov. Ralph Northam's push to ban the sale of assault weapons has failed after members of his own party balked at the proposal. SENT: 636 words, photos.

ROBERT DURST-MURDER TRIAL — One body never was found, another was chopped up and discovered floating in the Gulf of Mexico and a third was left face down in a pool of blood in her home. Prosecutors were not able to prove Robert Durst murdered the first two people -- his missing wife and a former neighbor -- but plan to present evidence of both in an effort to convict the millionaire real estate heir of killing his best friend. UPCOMING: 900 words by 3 p.m., photos.

ELECTION SECURITY-KANSAS — Kansas' elections chief is pushing to make the state's central voter registration database more secure by changing how counties tap into it, but some officials are nervous about what they see as a big project in a busy election year. sent: 775 words, photos.

MISSISSIPPI SHOOTINGS — The ex-wife of a Mississippi man on trial in the shooting deaths of eight people has testified that a sheriff's deputy became the first victim when he was shot in the face by the man she described as “abusive" and “controlling." SENT: 610 words, photos.

ELTON JOHN-PNEUMONIA -- Elton John intends to play his remaining shows in New Zealand and Australia after illness caused the singer to lose his voice and cut short a performance. SENT: 500 words, photos.

BKN--ALL-STAR GAME — Players were taking charges, bodies were hitting the floor, calls and non-calls were being screamed about on both ends. The fourth quarter of the NBA All-Star Game was as intense as the final moments of a playoff game, the biggest stars in the league holding absolutely nothing back. And in the end, Anthony Davis was a hometown hero by making a free throw. By Tim Reynolds. SENT: 1,090 words, photos.

Barcelona had been on track for a ...