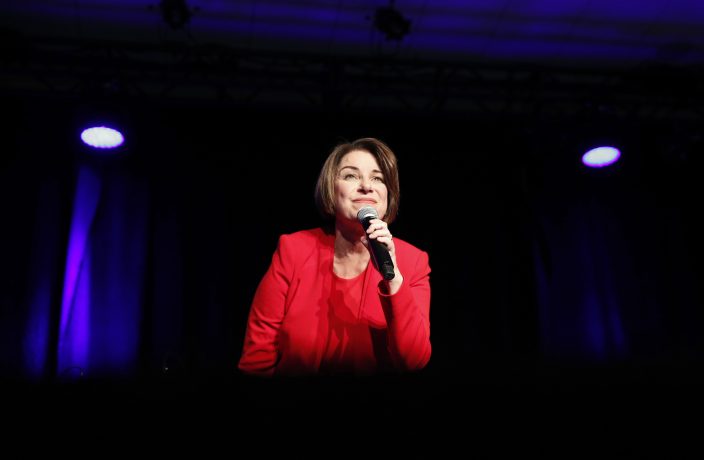 The Minnesota senator on Monday announced a television and radio ad in Las Vegas and Reno as early voting is underway for the state’s Democratic caucuses.

Latinos make up 29% of Nevada’s population and the Democratic candidates are courting them in the early state before final caucus voting Saturday.

Klobuchar comes from a mostly white state and is among the candidates working to prove she can reach out to diverse groups of voters in Nevada and beyond. She stumbled in an interview last week when she couldn't name Mexico's president, Andrés Manuel López Obrador.

Her ad features a Spanish-speaking narrator who says Klobuchar is a candidate who can actually defeat President Donald Trump and fight for better health care and prices for prescription drugs.

Billionaire Mike Bloomberg is taking lots of heat from his rivals for the Democratic presidential nomination. They portray him as an opportunist who's trying to buy his way to the White House.

On Monday, the former New York mayor posted a video mashup on Twitter showing aggressive and threatening comments by people who appear to be Bernie Sanders supporters, juxtaposed with Sanders calling for “civil discourse.”

Bloomberg tweets: “We need to unite to defeat Trump in November. This type of ‘energy’ is not going to get us there.”

That was a slap at claims by Sanders that he is commanding the excitement and energy in the Democratic race.

Most of the leading candidates are campaigning in Nevada for the caucuses Saturday. Bloomberg isn't competing there. But he might qualify for his first debate, coming Wednesday.

Those without broadband struggle in a stuck-at-home nat ...

In Sandwich, New Hampshire, a town ...