The notorious crime boss James “Whitey” Bulger terrorized Boston from the 1970s into the 1990s with a campaign of murder, extortion, and drug trafficking, then spent 16 years on the lam after he was tipped to his pending arrest.

In 2013, Janet Uhlar was one of 12 jurors who found Bulger guilty in a massive racketeering case, including involvement in 11 murders. But now Uhlar says she regrets voting to convict Bulger on any of the murder charges.

Her regret stems from a cache of more than 70 letters Bulger wrote to her from prison, some of which describe his unwitting participation in a secret CIA experiment with LSD. In a desperate search for a mind control drug in the 1950s, the agency dosed Bulger with the powerful hallucinogen more than 50 times when he was serving his first stretch in prison, in Atlanta — something never brought up in his federal trial. 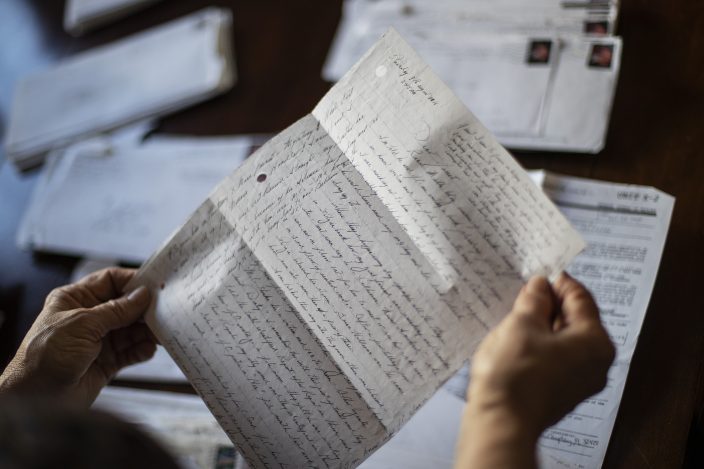 Janet Uhlar holds a letter she received through her correspondence with imprisoned Boston organized crime boss James "Whitey" Bulger, Friday, Jan. 31, 2020, in Eastham, Mass. "Had I known, I would have absolutely held off on the murder charges," said Uhlar, noting that Bulger's role in the experiments was never mentioned during his extended federal trial. "He didn't murder prior to the LSD. His brain may have been altered, so how could you say he was guilty?" (AP PhotoDavid Goldman)

“Had I known, I would have absolutely held off on the murder charges,” Uhlar told The Associated Press in a recent interview. “He didn’t murder prior to the LSD. His brain may have been altered, so how could you say he was really guilty?”

At the same time, Uhlar says she would have voted to convict Bulger on the long list of other criminal counts, meaning he still would likely have died in prison.

Uhlar has spoken publicly about her regret before but says her belief that the gangster was wrongly convicted on the murder charges was reinforced after reading a new book by Brown University professor Stephen Kinzer: “Poisoner in Chief: Sidney Gottlieb and the CIA Search for Mind Control.” 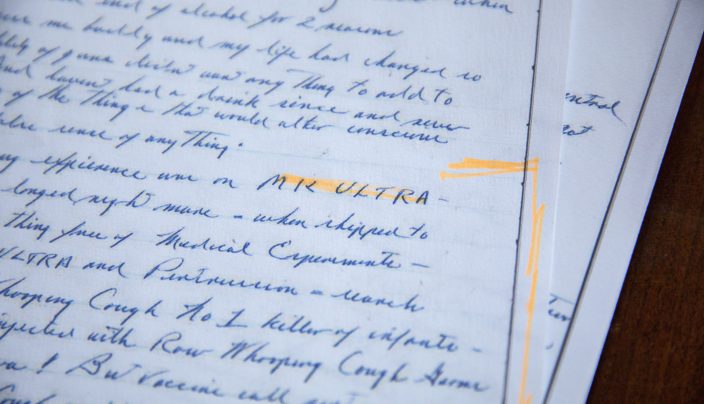 Letters addressed to Janet Uhlar that she received through her correspondence with imprisoned Boston organized crime boss James "Whitey" Bulger, sit on her dining room table, Friday, Jan. 31, 2020, in Eastham, Mass. Before he died, though, Bulger engaged in extensive correspondence with Uhlar, writing her more than 70 letters, including several that detailed his unwitting role in the MK-ULTRA experiments. (AP PhotoDavid Goldman)

The book digs into the dark tale of the CIA’s former chief chemist and his attempts to develop mind control techniques by giving LSD and other drugs to unsuspecting individuals, including colleagues, and observing the effects.

“It was encouraging to know I wasn’t losing my mind, thinking this was important,” Uhlar said.

Gottlieb’s secret program, known at MK-ULTRA, enlisted doctors and other subcontractors to administer LSD in large doses to prisoners, addicts and others unlikely to complain. In Bulger’s case, the mobster and fellow inmates were offered reduced time for their participation and told they would be taking part in medical research into a cure for schizophrenia.

“Appealed to our sense of doing something worthwhile for society,” Bulger wrote in a letter to Uhlar reviewed by the AP.

But nothing could have been further from the truth.

“The CIA mind control program known as MK-ULTRA involved the most extreme experiments on human beings ever conducted by any agency of the U.S. government,” Kinzer said. “During its peak in the 1950s, that program and its director, Sidney Gottlieb, left behind a trail of broken bodies and shattered minds across three continents.”

After Bulger was found guilty by Uhlar and the other jurors, a federal judge sentenced him to two life terms plus five years. But his life behind bars ended a little more than a year ago, at age 89, when he was beaten to death by fellow inmates shortly after arriving in his wheelchair at the Hazelton federal prison in Bruceton Mills, West Virginia. No criminal charges have been filed.

Although much had been written about the CIA’s mind control experiments before Bulger’s trial, Uhlar said she knew nothing about them until she began corresponding with the renowned gangster following his conviction and he told her about his harrowing experiences with LSD.

Eager to learn more, Uhlar reviewed the 1977 hearings by the U.S. Senate Committee on Intelligence, which was looking into MK-ULTRA, and found testimony where CIA director Stansfield Turner acknowledged evidence showing that the agency had been searching for a drug that could prepare someone for “debilitating an individual or even killing another person.”

“It opens the question of whether (Bulger) was responsible for the murders he committed,” Uhlar said.

At his 2013 trial, Bulger’s attorneys, J.W. Carney Jr. and Hank Brennan, unveiled a novel defense in which they admitted Bulger was a gangster, though one enabled by corrupt law enforcement officers.

But Anthony Cardinale, a Boston attorney who has represented numerous organized crime defendants, said he would have used Bulger’s participation in the CIA experiments with LSD to craft an insanity defense.

“I would have had him come into court like Harvey Weinstein, all disheveled, and in a wheel chair,” he said.

It would have taken only one juror voting not guilty on all the criminal charges in the Bulger trial to produce a hung jury, forcing prosecutors to decide whether to retry a case — a “monster victory” given Bulger’s decades of crime, Cardinale said.

Even under a more likely scenario, with Bulger found guilty on all counts except for the murder charges, the final verdict would likely have been devastating for family members of his victims.

“An acquittal of Whitey Bulger on the murder charges would have just caused additional pain and anguish,” said Paul V. Kelly, a former federal prosecutor who has represented the family of one of Bulger’s murder victims.

Bulger often wrote to Uhlar as if she were a friend, even joking with her. But in one letter he also enclosed a more menacing message inscribed to her on the back of a photo taken of him on “the Rock,” the infamous former prison on Alcatraz Island in San Francisco Bay, where he was transferred from Atlanta.

“At end of Alcatraz, getting more serious and capable of about anything,” Bulger wrote. “Hard time makes hard people.”