Ukraine and Russia-backed separatists blamed each other for an outbreak of fighting in the country's rebel-held east on Tuesday.

Ukraine's military said in a statement that the separatists attempted to advance into the Ukraine-controlled territory but were repelled. 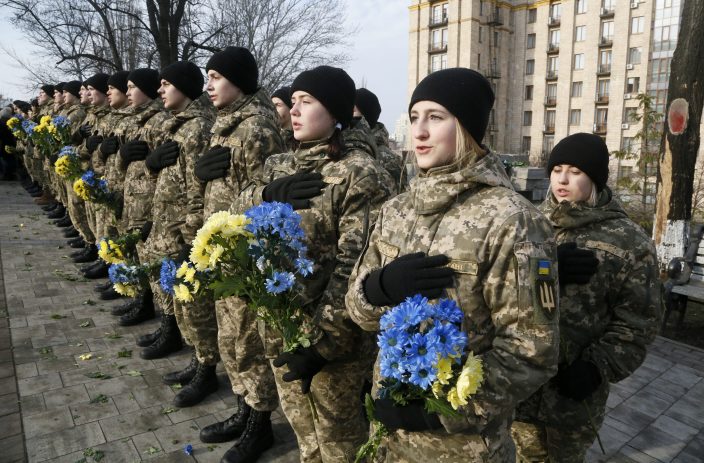 Ukrainian soldiers hold flowers and sing the national anthem at the memorial dedicated to people who died in clashes with security forces at the Independent Square (Maidan) in Kyiv, Ukraine, Tuesday, Feb. 18, 2020. People gathered to commemorate the Maidan protest movement and the events which took place in late Feb. 2014 that led to the departure of former Ukrainian President Victor Yanukovich and the formation of a new government. (AP PhotoEfrem Lukatsky)

Separatist authorities in the Luhansk region, however, blamed Ukraine for starting the fighting. They claimed the fighting erupted when a group of Ukrainian soldiers tried to make an incursion into rebel-held territory near the village of Holubovske, but got into a minefield.

The chief of the General Staff of Ukraine's armed forces, Colonel-General Ruslan Khomchak, said one Ukrainian soldier was killed and another five were wounded in combat. He said four separatists were killed and six others were wounded.

The separatists said two Ukrainian troops were killed and three others were wounded and the Ukrainian forces launched an artillery barrage to cover their evacuation.

They said a civilian resident in Holubovske was wounded by the Ukrainian shelling that also damaged civilian infrastructure in the villages of Kirovsk and Donetskiy.

The exchange of gunfire marks the latest spike in hostilities in the separatist conflict in eastern Ukraine that has killed over 14,000 people since 2014.

A 2015 peace deal brokered by France and Germany helped reduce the scope of fighting, but sporadic clashes have continued and efforts to negotiate a political settlement have stalled.

During a meeting in Paris in December, the leaders of Russia, Ukraine, France and Germany made a deal to exchange prisoners and pledged to ensure a lasting cease-fire in fighting between Ukrainian troops and Russia-backed separatists. They made no progress, however, on key contentious issues — a timeline for local elections in eastern Ukraine and when Ukraine can get back control of its borders in the rebel-held region.

Zelenskiy said on Facebook that Tuesday's outbreak of hostilities was an attempt to derail efforts to end the conflict and said he would call a meeting of his Security Council to discuss the situation.

“Our course for ending the war and our adherence to international agreements remain unchanged, just as our determination to repel any acts of aggression against Ukraine," he said.

Memo: Some in US may not get stimulus checks until Augu ...

Stimulus aid for 'small business' will go to ...

Spanish hospital personnel must improvise in a makeshif ...

Ukraine and separatists to pull back troops from a new area

Ukraine, rebels say pullback in the east is completed