President Donald Trump says that India Prime Minister Narendra Modi is expecting to turn out massive crowds for the president when he visits next week.

Trump will be in the city of Ahmedabad in Gujarat to attend an event called “Namaste Trump,” which translates to “Greetings, Trump,” at a cricket stadium.

Trump pivoted on a question about trade with India to say how much he likes Modi, adding that the prime minister expects some 7 million people to turn out for him between the airport and the cricket stadium. 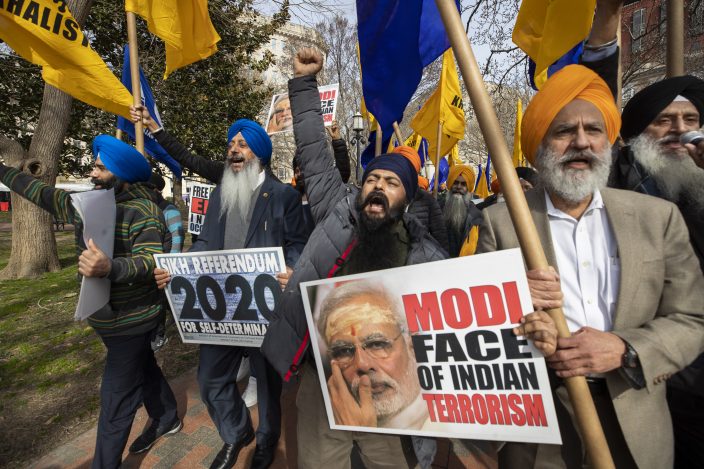 Bhupinder Singh, center, joins other Indian Sikhs in a march near the White House, Tuesday, Feb. 18, 2020, in Washington, to protest the Indian government's injustice against Sikhs in India ahead of President Donald Trump's visit to India. (AP PhotoManuel Balce Ceneta)

In preparation for Trump’s visit, a half-kilometer (1,640-foot) brick wall has been hastily erected, with critics saying it was built to block the view of a slum area inhabited by more than 2,000 people.

Senior government official Bijal Patel said the wall was built “for security reasons” and not to conceal the slum. 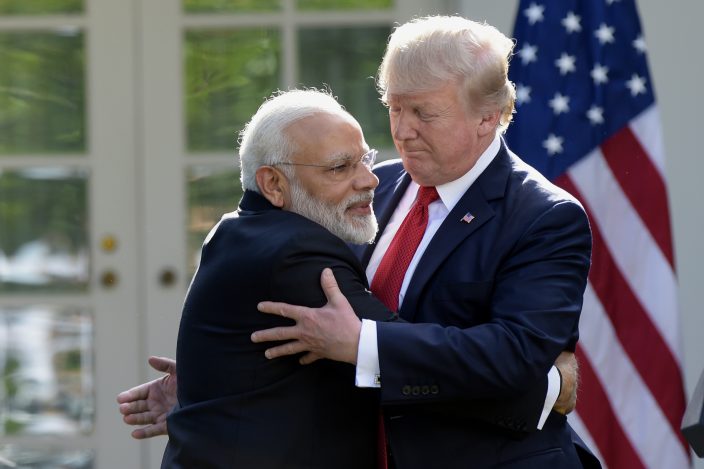 FILE - In this June 26, 2017, file photo, President Donald Trump and Indian Prime Minister Narendra Modi hug while making statements in the Rose Garden of the White House in Washington. Officials in the U.S. and Indian governments say President Donald Trump is in the early stages of planning what would be his first visit to India, the world's largest democracy. (AP PhotoSusan Walsh, File)

As for trade, Trump played down expectations for any major breakthroughs next week, saying, “I’m really saving the big deal for later on. I don’t know if it will be done before the election, but we’ll have a very big deal with India.”

Trade tensions between the two countries have escalated since the Trump administration levied tariffs on steel and aluminum from India.

India responded with higher tariffs on agricultural goods and restrictions on U.S. medical devices, prompting the U.S. to retaliate by removing India from a decades-old preferential trade program.

The U.S. runs a trade deficit with India of about $25 billion, according to the U.S. Trade Representative. India has relatively high tariff rates, especially in agriculture, and the Trump administration has been critical of that deficit, accusing India of unfair trading practices.

The Supreme Court on Monday reject ...

Trump in early stages of planning 1st visit to India