Mike Bloomberg will confront the greatest test of his presidential campaign when he faces five Democratic rivals in a debate in Las Vegas that could fundamentally change the direction of the party’s 2020 nomination fight.

The debate debut for the billionaire former mayor of New York is poised to offer fresh insight into whether his unconventional campaign strategy — bypassing early voting states such as Nevada and spending hundreds of millions of dollars to spread his message on the airwaves — is sustainable.

Wednesday night's debate comes at a pivotal point in the campaign as moderate voters are struggling to unify, with some increasingly looking to Bloomberg to become the clear alternative to progressive Bernie Sanders. And lest there be any doubt, all the participants expect a hostile reception for Bloomberg, who formally registered as a Democrat in 2018 and has faced relatively little national scrutiny so far in his surprisingly swift rise from nonpartisan megadonor to top-tier presidential contender. 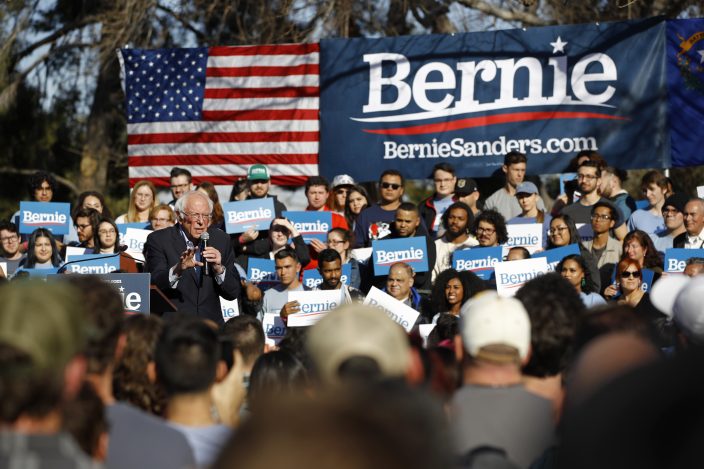 “He is going to have a giant target on his back from all sides,” said Democratic strategist Brian Brokaw. “It’ll either all come together brilliantly or could fall apart very quickly. ... The stakes are just incredibly high for him.”

The stakes are high for others as well just days before Nevada’s next-up presidential caucuses, the third contest in the Democrats’ chaotic 2020 primary season. After more than a year of campaigning, there is little clarity in their urgent search for a nominee to run against President Donald Trump in November.

Longtime establishment favorite Joe Biden, a former two-term vice president, is fighting to breathe new life into his flailing campaign, which enters the night at the bottom of a moderate muddle with former South Bend, Indiana, Mayor Pete Buttigieg and Minnesota Sen. Amy Klobuchar. Sanders, a Vermont senator, has emerged as the progressive wing’s clear preference after two contests as Massachusetts Sen. Elizabeth Warren is struggling to regain energy around her campaign. 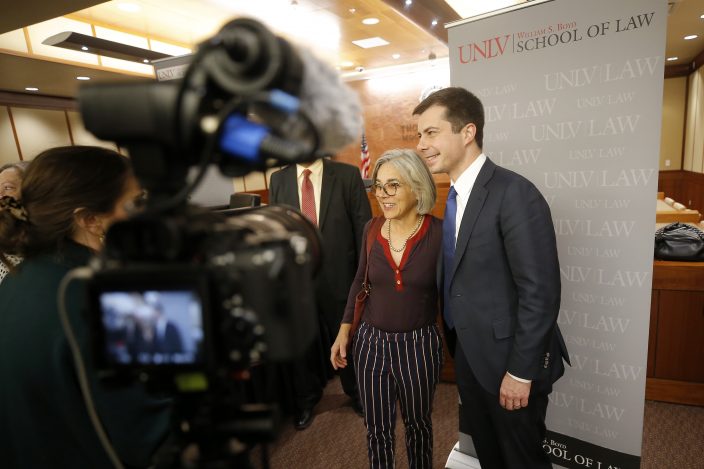 Some Democrats fear that the conditions are ripe for a bare-knuckles brawl on national television that could carve new scars into a divided Democratic Party that must ultimately come together this fall if it hopes to deny Trump a second term.

Bloomberg’s rivals have already indicated they will lean into his explosive comments on race and gender in addition to their charge that he’s using a fortune earned from a career on Wall Street to buy the presidency. Bloomberg’s rise in national polls has been fueled almost exclusively by an unprecedented national advertising campaign, carefully controlled campaign events and a sprawling national organization that has likely already cost him more than half a billion dollars. 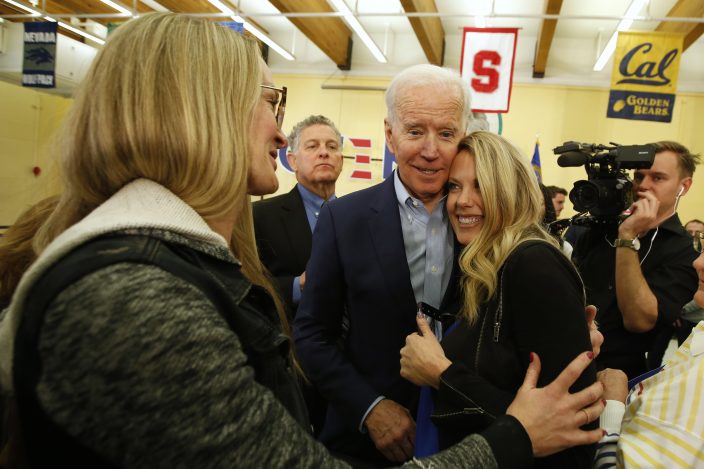 “It’s going to be a chance to finally bring scrutiny to Bloomberg’s record as a Republican plutocrat,” she said.

Bloomberg has been preparing for the debate behind closed doors for weeks, including prep sessions that feature senior aides playing his leading competitors. They expect him to come under attack early and often from multiple rivals.

His team was working to lower expectations ahead of his performance, suggesting his debate skills are rusty after more than a decade since his last election. 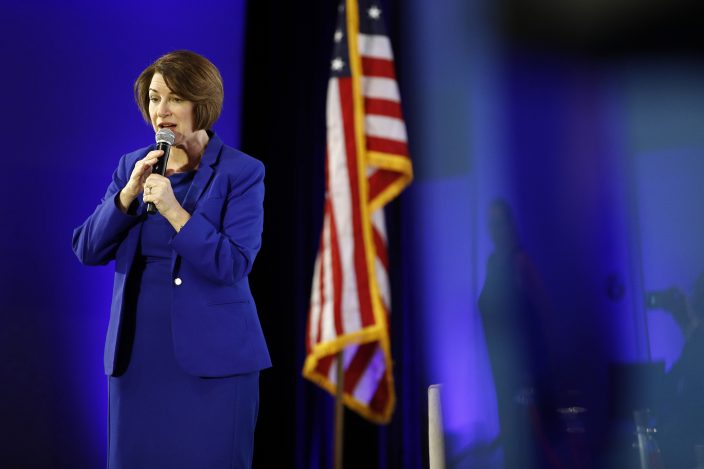 Bloomberg hasn’t been on a debate stage since 2009. His team notes he never faced more than one rival at a time over three elections for New York City mayor.

Despite the challenges, senior adviser Tim O’Brien signaled that Bloomberg welcomed a fight against Sanders, whom the campaign perceives to be the race’s clear front-runner.

“I think you’re going to see us go toe-to-toe with Bernie Sanders on important issues,” O’Brien said in an interview, raising questions about Sanders’ personal wealth, record on criminal justice and gun control.

Sanders welcomed the fight as well.

The Vermont senator railed against Bloomberg and “a system that allows billionaires to buy elections,” while campaigning in Nevada on the eve of the debate.

“Here is the message: Anyone here worth $60 billion, you can run for president, and you can buy the airwaves. My friends, that is called oligarchy, not democracy.”

While the same age and race, Bloomberg and Sanders are ideological opposites.

Bloomberg is one of the world’s richest men, having generated a net worth estimated at $60 billion after a career on Wall Street. He has spent hundreds of millions of dollars to combat climate change and gun violence and promote immigration reform in recent years, yet he takes a decidedly pragmatic approach that celebrates incremental improvement backed by data.

Sanders has a net worth estimated at $2.5 million thanks to book sales and the value of his home, but he has spent a lifetime in politics as an uncompromising democratic socialist demanding a political revolution to transform the nation’s politics and economy. He measures his success largely by the impact he’s had on the public debate, which has warmed to his calls for a $15 minimum wage, universal health care and sweeping action on climate change.

Voters will not formally judge Bloomberg’s performance until next month.

He is not technically competing in Nevada’s Saturday caucuses or any of the four primary contests scheduled for this month, preferring to invest his time and resources in the delegate-rich states that begin voting in March. In the modern era, such a strategy has never worked. Yet it's never been attempted by someone as wealthy as Bloomberg, who has already invested more than $400 million into a national advertising campaign and hired more than 2,000 campaign staffers.

The focus on Bloomberg on the debate stage, of course, means there will be less oxygen for others at a critical moment.

Buttigieg essentially tied in Iowa with Sanders and was a narrow second-place finisher in New Hampshire, yet many establishment leaders remain skeptical of the 38-year-old’s limited experience and ability to assemble a multiracial coalition to defeat Trump. Buttigieg needs a strong performance to help blunt Bloomberg’s momentum.

Klobuchar surged into the top tier of the race with a strong debate performance in New Hampshire. But with a significantly smaller national brand, she faces lingering questions about the strength of her organization and appeal among minority voters.

Warren may have the most to gain Wednesday night, having been pushed from the top tier after a bad performance in New Hampshire’s primary last week. She remains popular with her party’s far-left wing, though it's unclear if or when she will win a primary contest.

And Biden is betting everything on a comeback fueled by minority support in Nevada and South Carolina in the next two weeks.

A top Biden official described the former vice president as eager to confront Bloomberg on the debate stage. But Biden is also targeting Sanders.

He previewed one line of attack over the weekend, seizing on Sanders’ support for a 2005 law that granted gun makers civil immunity. Biden also hammered his strength with the powerful Culinary Union, which hasn't endorsed a candidate but claimed that Sanders' "Medicare for All" proposal would threaten their current health care coverage.

Amid the infighting, Democratic National Committee member Robert Zimmerman fears that his party may lose sight of its chief mission in 2020: defeating Trump.

“It’s going to get much nastier,” Zimmerman said of Wednesday’s debate. “The candidates have an obligation to unite the party, and they’re not going to get there by throwing around charges of racism and personal slurs.”

Desperate hunt for food by Peru's poor amid virus ...

Primary purgatory with no 12th Democratic debate on horizon

Biden, Sanders to debate against backdrop of global pandemic

Dem debate shifts from Phoenix to DC due to virus concerns