Artem Anisimov and Jean-Gabriel Pageau had two goals each as the Ottawa Senators beat the Buffalo Sabres 7-4 on Tuesday night.

Craig Anderson stopped 23 shots to pick up his 200th win with the franchise and move into a tie with Boston’s Tuukka Rask for 40th place all-time with 287 career wins. 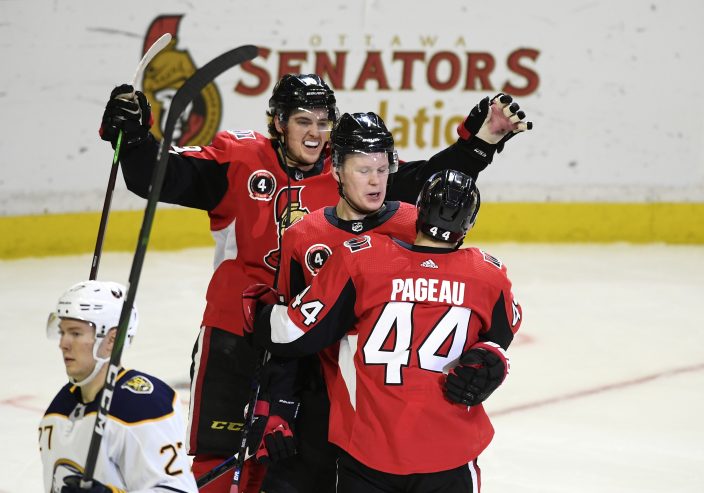 “It proves that I’ve been here a long time, that’s all that really says,” Anderson said. “We’ve had some good teams, we’ve had some bad teams here and we’ve kind of gone on the roller coaster ride. To get to that accomplishment is great and I’ll be looking to hit the next one the next time I get in there.”

“Overall very, very disappointing when you look at the start and the table that we had set and how we let that go on our own,” Sabres coach Ralph Krueger said. “We’re very disappointed right now with the result.” 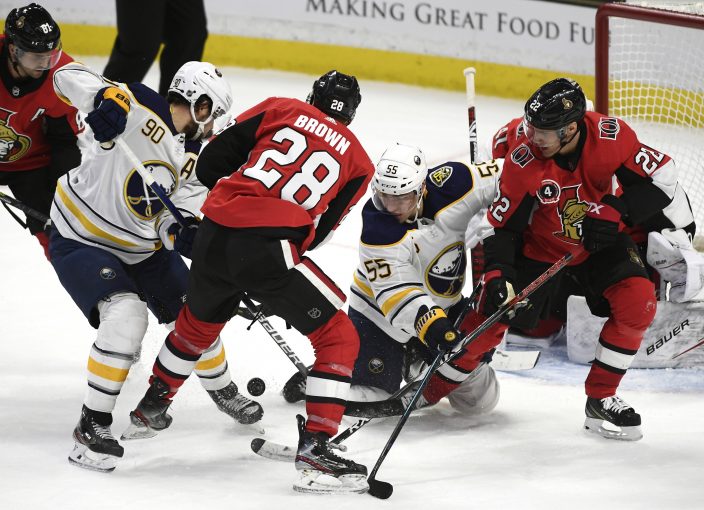 After falling behind 2-0 early in the first, the Senators scored four times in a span of 3 1/2 minutes to take the lead.

“They just kept coming,” Montour said. “I think we needed to find a way to get through that period in a sense and obviously we didn’t do that.”

Namestnikov got Ottawa on the scoreboard with his 13th, a short-handed score with just under six minutes remaining in the opening period. Anisimov tied the score 1:05 later and Batherson gave the Senators the lead just after the ensuing faceoff with his third just 9 seconds later. 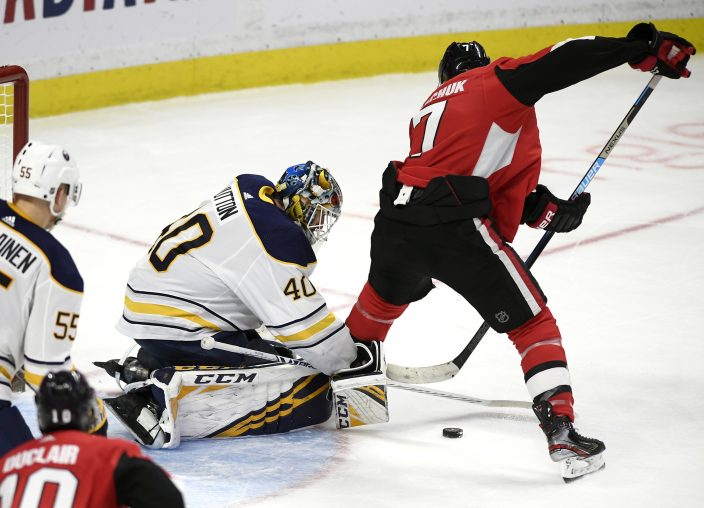 “There were some spirits,” Pageau said. “After Batherson scored with 4:44 left I thought that was pretty special. For sure everyone’s going to remember that.”

Buffalo pulled back within one 2:36 into the second as Okposo scored off an Ottawa turnover when he crashed into the Senators net. 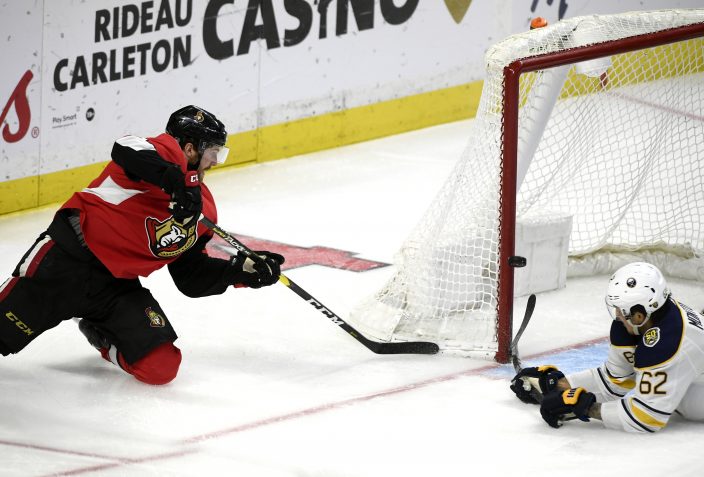 Ottawa Senators center Chris Tierney (71) watches his shot bounce around the post on a wrap around attempt, in front of Buffalo Sabres defenseman Brandon Montour (62) during the third period of an NHL hockey game, Tuesday, Feb. 18, 2020 in Ottawa, Ontario. (Justin Tangthe Canadian Press via AP)

Pageau restored Ottawa’s two-goal lead at 9:00, but Olofsson scored on the power play with 6:13 remaining in the period to make it 5-4.

Pageau got his second of the night and 24th of the season with 7:07 left in the third, and Duclair ended a 21-game goal-scoring drought with an empty-netter in the final minute to cap the scoring.

“Pageau’s been good all year,” Senators coach D.J. Smith said. “He plays hard, plays hard on the penalty kill, power play, hits guys, plays against the other guys’ top players and he was exceptional.” 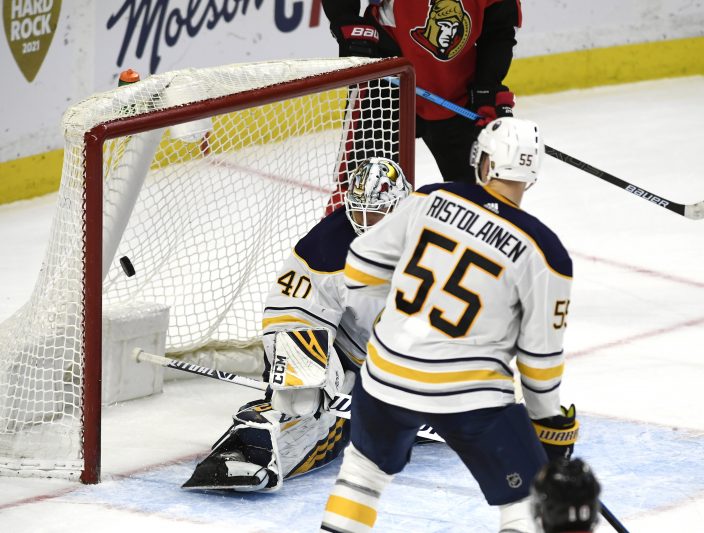 Prior to the game Phillips’ No. 4 was raised to the rafters making him just the second modern day Senators player to be honored, joining Daniel Alfredsson.

Alfredsson, along with former teammates Wade Redden, Shawn McEachern, Igor Kravchuk and many more were on hand to honor the defenseman. Phillips was Ottawa’s first player to play his entire career in a Senators uniform. He holds the franchise record for games played (1,179) and his 114-playoff games rank second in team history behind Alfredsson. 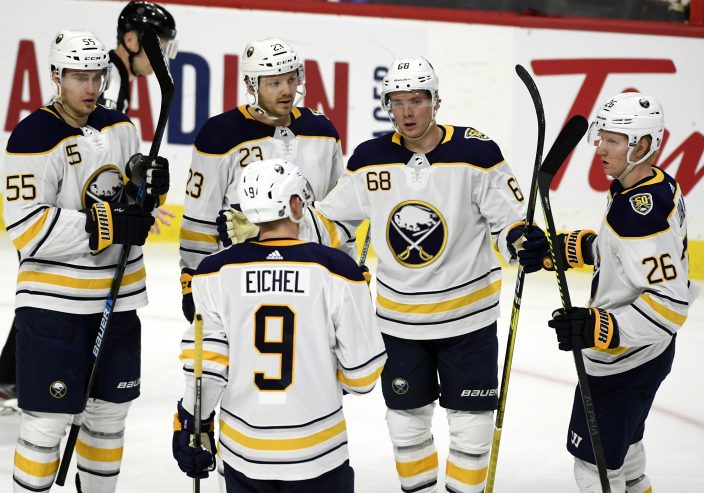 “Incredible,” said Phillips of seeing the banner go up. “It was kind of a finality with my hockey career and maybe that’s the most emotional part of it. It’s done now for sure. To be honored alongside (Alfredsson), long history of playing together, being great friends. When I look at, I don’t know what the number is but how many guys in the league even have their number retired. To be in that small company I’m really at a loss for words. It’s a really special feeling.”

Curtis Lazar was the lone Sabre to watch the presentation. Lazar, drafted by the Senators in 2013, lived with Phillips and his family while playing in Ottawa.

NOTES: The Senators made their first move in anticipation of the trade deadline as D Dylan DeMelo was traded to Winnipeg in exchange for a third-round pick in the 2020 draft. ... Buffalo’s Rasmus Dahlin picked up his 80th career point with an assist. 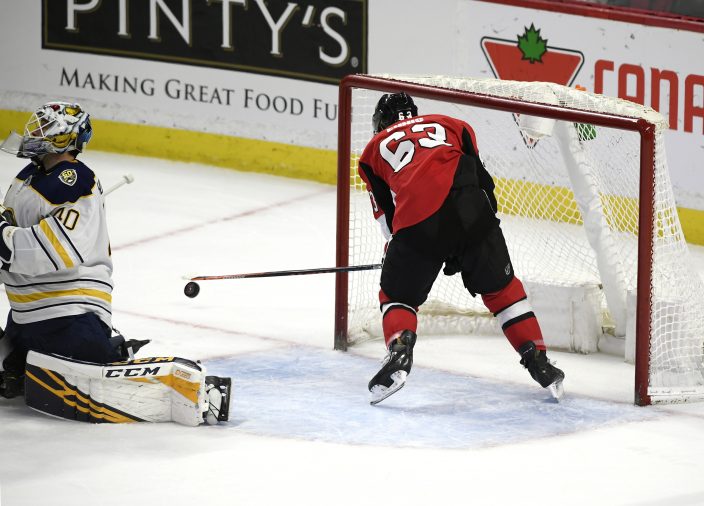 Sabres: At Pittsburgh on Saturday. 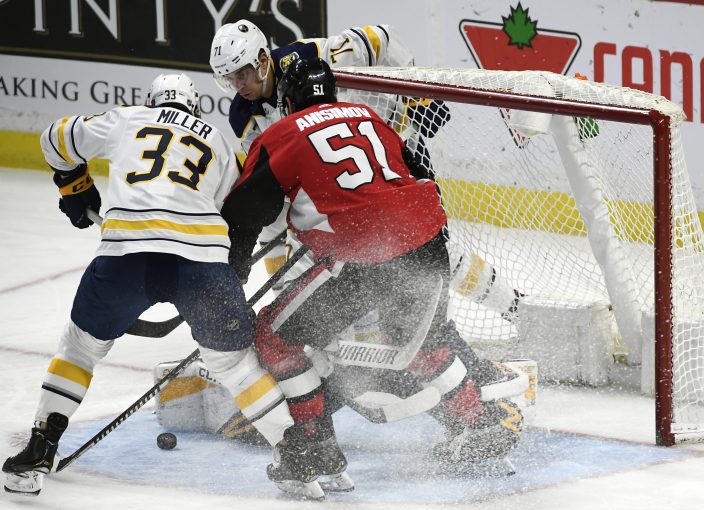 Retired Ottawa Senators player Chris Phillips and his family watch as his jersey number is raised to the rafters during a ceremony before an NHL hockey game between the Senators and the Buffalo Sabres in Ottawa, Ontario, Tuesday, Feb. 18, 2020. (Justin TangThe Canadian Press via AP)