Devonte Graham had mixed emotions when Kemba Walker left for the Boston Celtics.

Walker had become his mentor on the court last year and a close friend off it, regularly inviting Graham over to his house for a meal cooked by his personal chef. Walker would let the rookie swim in his pool and lend him his car occasionally, too.

But while he knew he'd miss hanging out with his buddy, Graham realized that Walker's departure meant he'd see increased playing time — and have a chance to prove to everyone that he belongs in the NBA. 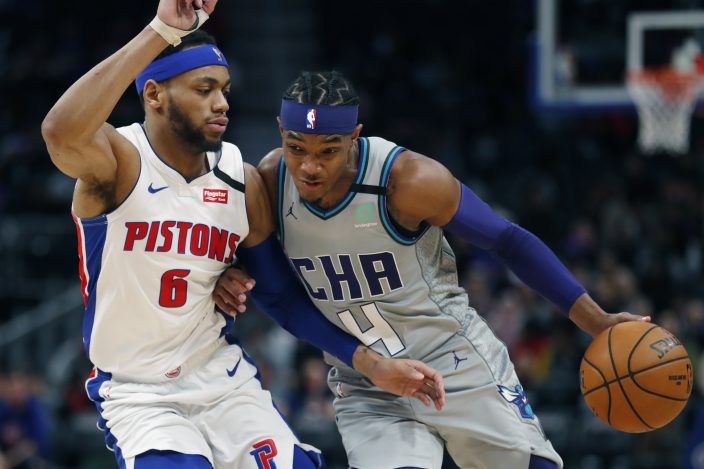 Graham has done just that.

The Charlotte Hornets' second-year guard is averaging 18.1 points and 7.8 assists while playing 35 minutes per game entering Thursday night's game at Chicago. He is fifth in the league in 3-pointers made (190).

That's a dramatic improvement over last year's rookie season, when Graham averaged 4.7 points and 2.6 assists in 14 minutes per game playing behind Walker and NBA veteran Tony Parker, all the while splitting time between the Hornets and their G League affiliate in Greensboro.

“Nobody expected Devonte to be as good as he’s been this year — not even Devonte,” Hornets owner Michael Jordan told The Associated Press. “I think he believed he was better than he was the year before, but I think he's come out and shocked everybody in terms of the way he played.”

Graham is certainly in the conversation, along with New Orleans' Brandon Ingram, Miami's Bam Adebayo, Oklahoma City's Shai Gilgeous-Alexander and others. But Graham's 13.4 points per game scoring improvement over last season far outdistances anyone else.

“That is the Devonte I have known all of my life,” Mitchell said. “He steps up once the lights come on. He makes tough plays. I’m so happy for him. For him to do what he’s doing, it’s really unmatched. A lot of people didn’t really know who he was before this season.”

He's been impressed with Graham's consistency over the course of the season.

“Just like we talked about with Pascal, it’s hard to be a consistent performer in this league,” Nurse said. "To go from off the bench to consistently doing it every night is a really big leap, maybe a bigger leap than people think it is. We were keeping an eye on Pascal last season, wondering was this for real and was he going to be able to sustain this throughout the season? Was he able to bounce back from a tough night? Obviously, Pascal did. And Devonte is showing a lot of the same qualities.”

Graham has surprised even himself a little.

He laughed when thinking back to a game in December when he scored 40 points in a victory over the Brooklyn Nets.

“I don’t know what happened there," Graham said with a wide smile.

Outside of a mild slump before the All-Star break, Graham has remained fairly consistent despite seeing increased attention from defenses that know the Hornets don’t have a lot of other scoring options. His 16 points/assists double-doubles are seventh most in the NBA this season.

But Hornets coach James Borrego has been most impressed with Graham's 3-point shooting.

“The volume of 3s he has taken and made is huge — that’s extreme,” Borrego said. “The off-the-dribble shooting is elite, which is tough to do. We saw Kemba develop that over the last few years here, but he didn't have that earlier in his career. Devonte has been able to do that in his second year."

Graham began the season as a reserve but quickly emerged as the team's top scoring threat, and Borrego quickly moved him into the starting lineup alongside Terry Rozier, who was pegged as Walker's replacement. He's been asked to play on and off the ball, similar to what he did in the same backcourt with Frank Mason at the University of Kansas.

Now Graham has emerged as a player that the Hornets feel they can build a franchise around.

But Jordan said Graham must continue to strive for greatness.

“I think he is starting to realize now that when defenses gear up against him, he’s going to have to continue to improve," Jordan said. "I think he has done a good job of excelling and his hard work this summer has paid off. Like any great player, you can’t stop. You have to keep improving and getting better. And he will get better. He's done an unbelievable job to this point.”

What world leader could resist a “ ...