Christian Yelich was driven last year by a desire to improve on the performance that earned him the NL MVP award in 2018.

He won his second straight NL batting title and finished second to the Los Angeles Dodgers' Cody Bellinger in the MVP vote, his season cut short when he fouled a pitch from Miami's Elieser Hernández off his right kneecap on Sept. 10, breaking it.

"There will be no lack of motivation," Yelich said. 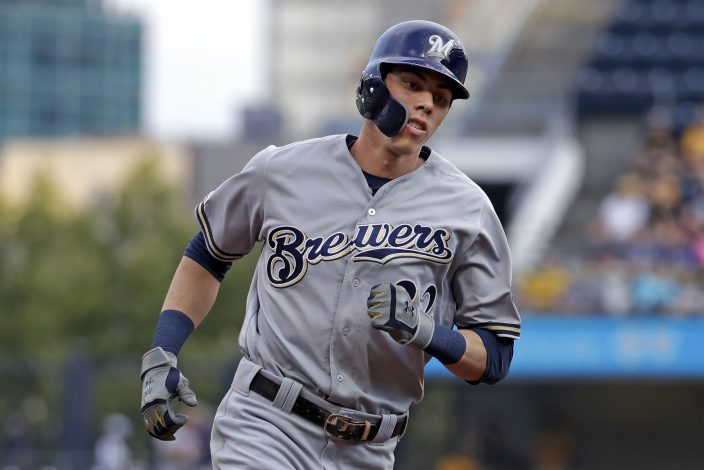 FILE - In this Monday, Aug. 5, 2019 file photo, Milwaukee Brewers' Christian Yelich rounds third after hitting a solo home run off Pittsburgh Pirates starting pitcher Dario Agrazal during the first inning of a baseball game in Pittsburgh. The Milwaukee Brewers have a lot of work to do in spring training. Having Christian Yelich sure helps. Yelich was working on a strong case for his second straight NL MVP award last year when he broke his right kneecap in September, sidelining the All-Star slugger for the rest of the season. (AP PhotoGene J. Puskar, File)

He is likely to have less protection in the batting order following the departures of Jesús Aguilar, Yasmani Grandal, Mike Moustakas, Travis Shaw and Eric Thames.

"It's hard to stay disciplined every day," Yelich said. "You really have to bear down and focus, but I feel like if you do that, you make good decisions, and walks help the team, too. That's just how I've done it, it's what I did last season, especially toward the end there, and it's what I'm gong to work on again this year."

Milwaukee plans to shift him from right field back to left, creating a spot on right for newly signed Avisaíl García. Yelich won a Gold Glove in left with the Miami Marlins in 2014. Manager Craig Counsell doesn't plan to use Yelich in at least the first week of exhibition games, which start Saturday.

"It's just the way the ball comes off the bat; lefty or righty," Yelich said. “Just getting used to seeing it. I'm going to have to do it again in live and games to get used to it. There's a lot of things you don't really think about until you get back out there, but it's not too big of a deal.”

Yelich will be paid deferred money by Brewers until 2042

Yelich stays quiet amid reports of new contract with Brewers

Brewers' Yelich out of lineup again with back spasms

NL MVP Yelich out of lineup with lower back stiffness