Marcus Semien stayed with his batting cage routine from the start of last season, and it paid off with career numbers for the Oakland Athletics’ slugging shortstop.

Semien posted career-best numbers with 33 home runs, 92 RBIs, a .285 batting average and 187 hits. All from almost exclusively the leadoff spot in 2019, from where he helped lead the A’s to their second straight AL wild-card game.

“In years past I felt like I was searching a little bit, trying to find something that felt right,” Semien said Wednesday at spring training. “And I stuck with something the whole year. I did in my lower half. It was more in my legs with my swing and just learned a lot about my swing.” 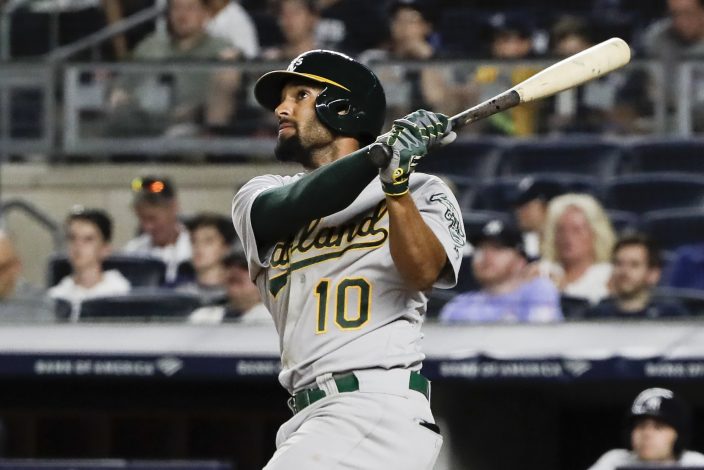 FILE - In this Aug. 30, 2019, file photo, Oakland Athletics' Marcus Semien watches his home run during the ninth inning of the team's baseball game against the New York Yankees in New York. Following a career year, Semien was rewarded Friday, Jan. 10, with a $13 million, one-year contract that avoids arbitration and gives him a raise of $7.1 million. Semien played all 162 games for the first time in 2019 to help the A's win 97 games for a second straight season and the AL's top wild card. He finished third in MVP voting after putting up several personal bests: 33 homers and 92 RBIs while hitting .285. (AP PhotoFrank Franklin, File)

Semien, at 29 years old now in his sixth season with the A’s, said his home runs were a byproduct of being ahead in the count more often and swinging at strikes. He hit 22 of his home runs from July to September.

Semien was as reliable as any A’s player in the A’s 97-win 2019 campaign. He played all 162 games plus the wild-card game, something he took pride in.

As a younger major leaguer, Semien drew inspiration from former White Sox teammate Alexei Ramirez, a shortstop whose goal, Semien said, was to play every game of every season. It became Semien's goal once he became an everyday player.

Playing in the Bay Area, where Semien was born and raised, has also been a motivator. Semien has for some time held a leadership role with the club as both experienced veteran and players union representative.

“It’s just a different place. For me it’s home,” Semien said. “We’re trying to let new guys know how it is (in Oakland) with the new guys in here and what to expect.”

He’s a big part of the core of the team, one that goes into another year together and includes established big leaguers in Matt Chapman, Matt Olson and Khris Davis.

“Those guys really kind of set the tone for how we do things around here,” manager Bob Melvin said. “It’s great when your best players are the hardest workers.”

Last year’s wild card loss, 5-1 to the Tampa Bay Rays at home, stung after such a successful season. Semien took from the loss the feeling that the A’s need to get off to a better start in 2020.

“If we can win the division then we don’t play in that game, and we have a better chance in a series,” Semien said. “April’s very important. We put more stock in those games and have a good April and see what we do.”

Semien hopes for another big year, but 2019’s numbers won’t be easy to duplicate.

“You’re getting that many home runs out of the leadoff spot, that many runs, that many RBIs, that just doesn’t happen very often,” Melvin said. “It’s more of a luxury than a need. It’s a tough season to completely follow up but he’s about as driven a guy as we have.”

At funerals in virus outbreak, mourning is from a dista ...

No one stands in line to embrace t ...

Saturday was supposed to mark the ...