As Justin Verlander approaches his 37th birthday, Houston's ace evolves to maintain the skills that allowed him to win his second Cy Young Award last season, eight years after he won the first one.

Verlander, who will turn 37 on Thursday, talked about aging this week as he prepares for his 16th MLB season.

“The end goal is just to continue to adapt and try to be successful and fight this age thing,” he said. “You can't just keep doing the same stuff. Your body changes as you get older and you need to adapt and do things a little bit differently to try stay on top of your game.” 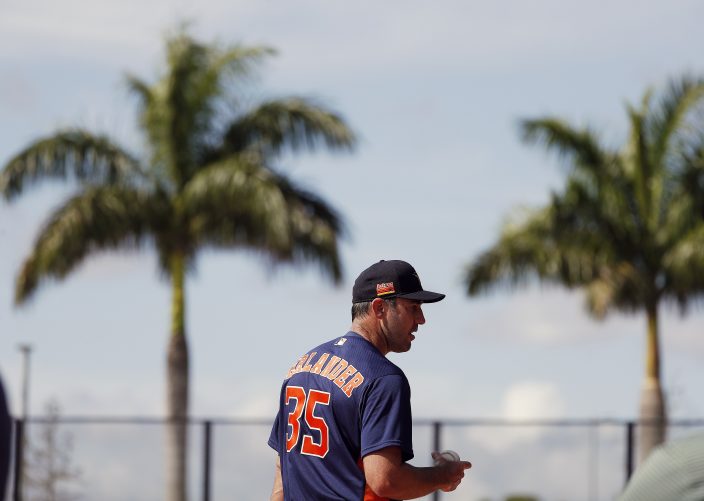 Verlander was able to do that last season when he led the majors with 21 wins and his 2.58 ERA ranked second in the American League. He won the AL Cy Young Award for the first time since 2011, when he also was MVP.

Verlander led the majors with 223 innings, his most since 2012, and his 34 starts tied for the most in the league. he became just the sixth pitcher to throw three no-hitters. 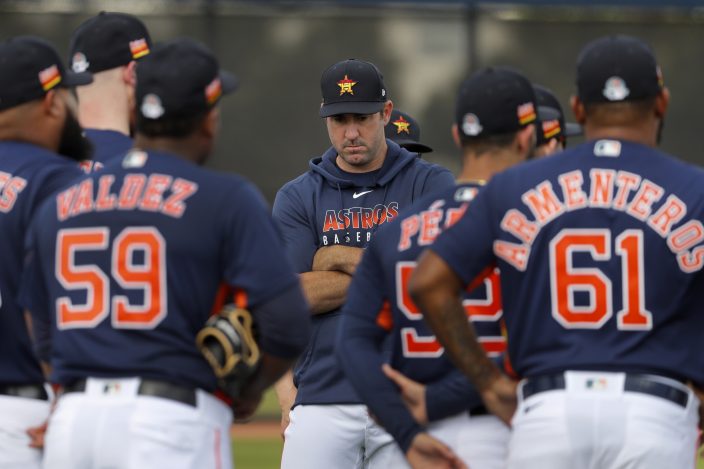 Houston Astros pitcher Justin Verlander crosses his arms as he stands with his teammates at the start of their first spring training baseball workout of the season Thursday, Feb. 13, 2020, in West Palm Beach, Fla. (AP PhotoJeff Roberson)

Though Verlander always hoped to have a long career, there was a time where he wondered if he’d even pitch into his mid-30s. He was hurt in 2014 at age 31 and didn’t feel like himself.

“Not that the competitiveness faded, but my ability to compete at a high level,” he said on his self-doubt. “It was difficult. It was mentally draining just not being healthy and trying to fight through it for myself, for the Tigers. At the time just hearing everybody say I was done just wasn’t easy.”

He was eventually able to get healthy and pitch 2½ more seasons for the Tigers, then was traded to the Astros during the 2017 season.

“I look back at that now as kind of a necessary evil for my career,” he said. “I learned a lot about my body and my process through that and I'm just fortunate that I didn't severely hurt myself during that time and I was able to come out of it better on the other side.”

Verlander said his years of training for the rigors of a season have taught him many lessons. He doesn’t lean on anyone specific for help and advice, but he tries to gather information from experts in a variety of fields to perfect his training plan.

And now that he’s starting his third full season with the Astros, he’s more comfortable being a leader. He delights in helping Houston's young pitchers and always is available to answer questions and give advice.

“That's one of the biggest things that I want to leave this game with is hopefully, I made an impact on some other careers, too,” he said.

While Verlander prepares for the season, the right-hander, like the rest of the Astros, knows the team will have to deal with the fallout from the sign-stealing scandal. He believes the only way to move on from it will come during the regular season.

“I think that'll happen on the baseball field when we start playing real meaningful games,” he said. “Like I said before, I think. the only thing we can do is go out and play baseball and win.”

With fellow ace Gerrit Cole gone to the Yankees as a free agent, Verlander will need to turn in another exceptional season if the Astros hope to return to the World Series. He’s under contract with through the 2021 season but has indicated that he’d like to pitch past that if he’s still performing well.

“I owe it to myself, I owe it to the team I'm playing for and I owe it to everybody along the way that's helped me be where I am to give everything I’ve got to stay as good as I can and put in the work for as long as I can,” he said.