A rare and looted crown from the 18th century was returned to Ethiopia on Thursday after it was discovered in the Netherlands two decades ago.

The Dutch government facilitated the handover “with the belief that it has a duty to restitute this important artifact back to Ethiopia,” the office of Prime Minister Abiy Ahmed said, sharing photos of a smiling Abiy holding the ceremonial crown.

“This is a historic day for us,” Hirut Kassaw, Ethiopia's minister for culture and tourism, told The Associated Press. 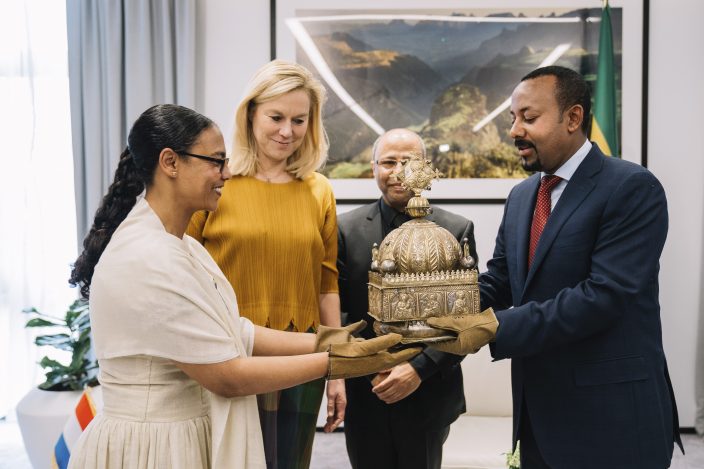 Ethiopia's Prime Minister, Abiy Ahmed, right, receives with gloved hands during a ceremony to hand over a lost crown Thursday, Feb. 20, 2020. The 18th Century Ethiopian crown has been returned home after being hidden in a Dutch flat for the past 21-years. (The Office of Prime Minister Abiy Ahmed via AP)

The religious crown went missing in 1993 and was discovered in Rotterdam in October. “I still don’t know how this crown and the other items were looted and taken out of Ethiopia,” the culture minister said, adding that several other items were stolen including a cross.

Ethiopia, like many African nations, has been outspoken about seeing artifacts returned home from museums and private owners around the world. Last year the National Army Museum in Britain said it would return two locks of hair from the widely revered Ethiopian Emperor Tewodros.

The Dutch government in a statement Thursday said the crown was the property of the Ethiopian Orthodox Church. It said the crown went missing from the Holy Trinity Church in the village of Cheleqot.

An ancient crown that was taken from Ethiopia many years ago is seen in this photo taken inside the office of Abiy Ahmed Ethiopian Prime Minister, Thursday Feb. 20, 2020. The 18th Century Ethiopian crown has been returned home after being hidden in a Dutch flat for the past 21-years. (The Office of Prime Minister Abiy Ahmed via AP)

For years the crown was in the hands of Sirak Asfaw, a Dutch national of Ethiopian origin, the statement said. He reached out to the foreign ministry last year “through the mediation of art detective Arthur Brand, to discuss how to return this important cultural artifact.”

“He told us someone gave him to look after it. But after realizing it was of Ethiopian origin, he refused to return it back to the owner and kept it for 21 years," the culture minister said.

The crown is on display at Ethiopia's national museum in the capital, Addis Ababa, for a few days and then will be returned to its original place in the church in Cheleqot, the minister said.

“We’re honored and delighted to have been able to facilitate the rightful return,” Kaag said.