EDITOR'S NOTE — The victory by the U.S. men's hockey team over the heavily favored Soviet Union at the 1980 Winter Olympics is widely regarded as one of the greatest upsets in sports history. Former AP Sports Editor Wick Temple later wrote: “The old rule that there should be no cheering in the press box was broken at Lake Placid ... Everybody was on a hockey high. And we soon found ourselves dashing out of the newsroom to cover the happy mob that snake-danced down Main Street." With the 40th anniversary of the game approaching on Feb. 22, The Associated Press is republishing two stories from that night as printed Feb. 23, 1980, in the Pottsville (Pa.) Republican: 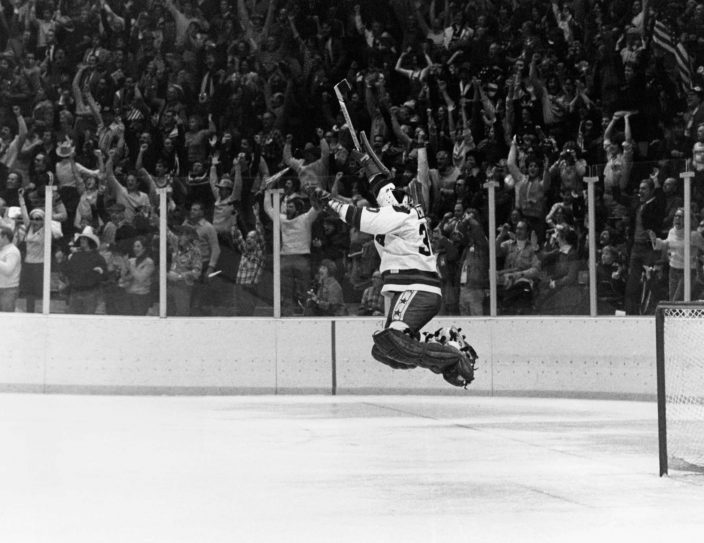 Driven by their own emotion and the cheers of a frenzied, star-spangled crowd, the United States hockey team has delivered what may well be the most stunning upset in Olympic history and stands on the verge of a medal at the 1980 Winter Games.

Call it Team Excitement. This ambitious, energetic squad of college kids ignored adversity and bounced from behind on third period goals by Mark Johnson and Mike Eruzione to score a stunning 4-3 upset victory over the defending champion Soviet Union Friday night.

With roars of “USA! USA! USA!” ringing in their ears, America’s comeback kids rode the red-hot, 36-save goaltending of Jim Craig to a sensational victory that set off a wild celebration, first on the ice and then all over this Olympic town. 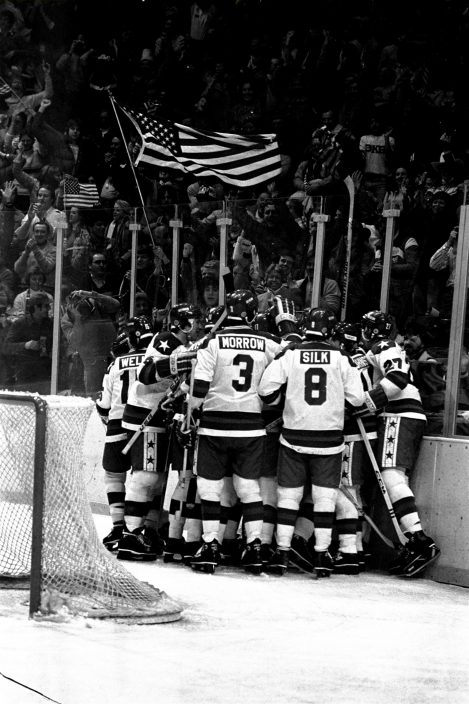 FILE - In this Feb. 22, 1980, file photo, U.S. ice hockey players celebrate after a first period goal by Buzz Schneider against the Soviet Union at the Winter Olympics in Lake Placid, N.Y. (AP PhotoFile)

Just as the hockey game ended, fireworks exploded over Mirror Lake – part of the traditional awards ceremony saluting Friday’s medal winners, including American slalom racer Phil Mahre. But the coincidence was just too good for the flag-decked crowd that spilled happily into the narrow streets of this tiny village after the American hockey victory.

“In all due respect to that team and to the (American) silver medal team in 1972, this has to be the biggest win in our Olympic history,” said Coach Herb Brooks. 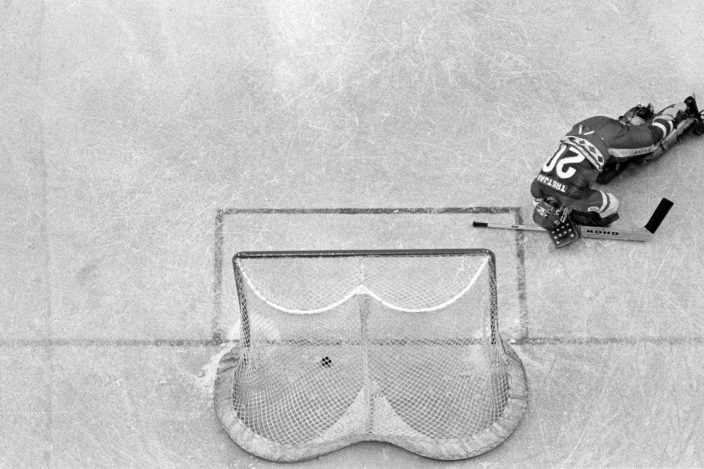 In this Feb. 22, 1980, file photo, Soviet Union hockey goalie Vladislav Tretiak falls to the ice as a goal is scored by U.S. player Mark Johnson (not shown) in the first period of a medal round match at the 1980 Winter Olympics in Lake Placid, N.Y. The U.S. defeated the Soviets 4-3. (AP PhotoHarry Cabluck, File)

When the United States swept to the Olympic gold in 1960, the Soviet Union was not yet the hockey powerhouse it is today. The Russian team America beat 20 years ago was still refining its game. The one America beat Friday night is acknowledged by most hockey people to be the finest unit in the world – and that includes professionals, who these Soviets have often handled with ease.

Brooks knew all that when he delivered his pre-game speech to his team. It was simple and to the point. This is what he told newsmen: “You are born to be a player. You are meant to be here. This moment is yours. You’re meant to be here at this time. Let’s have poise and possession with the puck.”

And then he sent Team Excitement on the ice.

Three times the young Americans fell behind by a goal and each time they came back, first on a goal by Buzz Schneider and then one by Mark Johnson.

Johnson’s goal came with a single slim second left on the clock in the first period. But the Soviets regained the lead again in the second period and limited the Americans to two shots on goal in those 20 minutes. Again, they seemed in control.

Still, there were 10 minutes to play and that can be an eternity. It seemed like one for the Americans, who turned back every Soviet thrust and then exploded in joyful excitement at the final buzzer. They tackled each other and rolled happily on the ice like so many excited kids, while the Soviets stood and waited for the traditional handshaking ceremony.

The loss was the first in Olympic competition for the Soviets since 1968 and left the Americans needing only a victory over Finland Sunday to clinch the gold. But the Russians still have a shot at the gold. To win it, they would have to beat Sweden Sunday and hope that Finland defeats the United States.

Sweden tied Finland 3-3 in Friday night’s other medal round game. That left the United States with three points, the Soviets and Swedes with two and Finland with one in the mini-tournament to determine the medals.

For a change, it was the Soviet hockey players who looked on in envy. Downcast, they leaned on their sticks, awaiting the ceremonial handshake that concludes every international contest.

Usually, it is they who act the gracious winner’s role. But this time, this one Friday at the Winter Olympics, it was the Americans’ turn; their 4-3 victory had made the conquerors the conquered.

Hockey gold medal hopes are alive and well in Lake Placid. The Americans are one victory over Finland away from making their gold medal dream a reality.

“He said we had made the American people very proud; that we reflected the ideas of the country and what we stand for,” said Brooks, who – along with the entire American Olympic delegation – has been invited to the White House Monday.

The invitation stands no matter what happens Sunday, and any number of things might. The Americans, this dramatic victory theirs forever, could still finish out of the medals chase if badly beaten by Finland. They could win a bronze, or a silver, or a gold.

This is how it stands: After Friday’s two medals round games (Sweden and Finland tied 3-3 in the other), the Americans have three points, the Soviets and Swedes two, and Finland one. If Sweden ties the Soviet Union Sunday and Finland beats the Americans, all would have three points. If Finland’s victory is a big one, the infamous “goal differential” (goals given up subtracted from goals scored) would break the tie and leave the U.S. with nothing to show for its smashing, upset triumph Friday.

If virtually anything else happens other than a lopsided U.S. loss, the Americans will win a medal.

“But we’ll worry about that tomorrow,” said Mark Johnson after the Americans had knocked goalie Vladislav Tretiak out of the game, rallied from three one-goal deficits, and stunned the Soviet team that has won the last four Olympic golds and was heavily favored to repeat.

If the Soviets went ahead, the Americans rallied. Finally, on a power play at 8:39 of the third period, a Dave Silk pass bounced off the skate of defenseman Sergei Starikov and bounded right to Johnson. A five-foot shot was all it took for a 3-3 tie, and Eruzione netted a 25-footer at the 10-minute mark to settle the issue.

For the fifth time in the six games they have played her, the Americans gave up the first goal. Vladimir Krutov tipped an Aleksei Kasatonov shot past goalie Jim Craig at 9:12 of the opening period.

Buzzy Schneider brought the United States back at 14:03, powering a 55-foot shot over Tretiak’s left shoulder and marking the beginning of the end for the internationally acclaimed net-minder. Tretiak’s vulnerability is long shots, and his muff of another one helped the Americans tie it with one second left in the period.

Sergei Makarov had fought away from a Johnson check to flip a 15-foot shot past Craig at 17:34, but – with the clock winding down and the crowd of 8,500 screaming “U-S-A, USA,” the U-S-A stormed back. Dave Christian took a 100-foot shot on Tretiak, who kicked it directly in front of Johnson.

A few fakes later, the game was tied 2-2 and Tretiak was gone. Vladimir Myshkin, who beat the National Hockey League all-stars 6-0 to win the Challenge Cup for the Soviets last February, took over.

He fared no better, and the Soviets suffered their first loss in an Olympic hockey game since 1968, when the Czechs beat them 5-4 at Grenoble, France.

People charged into the streets when it was over, waving the flags they had brought to the game, hollering the chant that is their trademark and going every bit as crazy as the players did themselves.

“We went nuts,” said (Rob) McClanahan. “ What do you do when you win a game like this? You whoop it up. You hug each other. You shake hands.”

Before New Zealand began its four- ...

The singer Pink had tested positiv ...