Elizabeth Warren enters the final stretch before Saturday's Nevada Democratic caucus with a new and enviable but nonetheless critical mission: capitalizing on a standout performance during Wednesday's presidential debate.

The Massachusetts senator took a leading role in blasting rival Mike Bloomberg over his previous comments about women, his past support of policing programs that disproportionately targeted minorities and for deploying his vast personal wealth to, as she characterized it, buy the White House. Warren also hit fellow progressive and Vermont Sen. Bernie Sanders and Minnesota Sen. Amy Klobuchar over health care, and had multiple, stinging criticisms for former Vice President Joe Biden and Pete Buttigieg, the former mayor of South Bend, Indiana.

Those takedowns prompted a fundraising surge for Warren and revived interest in a campaign that has been flagging since disappointing finishes earlier this month in Iowa and New Hampshire. She finally displayed a political urgency upon which her campaign may now depend — the trick will be to keep it going. 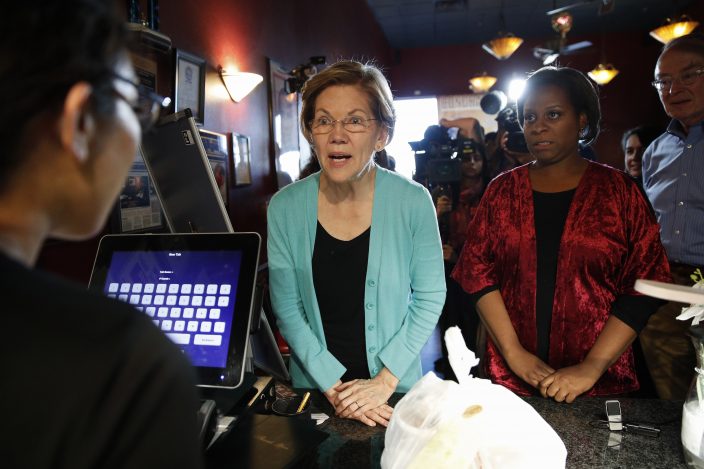 “The debate performance that she had last night will certainly help restore confidence in a lot of folks who may have been listening to the punditry, and now they will fall in love with her all over again,” said Wendy Brawley, a South Carolina state representative who has endorsed Warren.

But for all that energy, it's still not clear where Warren might actually win. A sprawling political infrastructure didn't help her in Iowa, nor did the location of New Hampshire, basically in her political backyard. She is not favored in Nevada, where nearly 75,000 people participated in early voting and missed her strong debate performance.

South Carolina holds its primary next week and then comes “Super Tuesday” on March 3, when 14 states vote. With the possible exception of Massachusetts, which votes then, there appear to be few slam-dunks for Warren.

“Last night it worked,” Zogby said. “Beyond that? No. It's harder to see.”

In the meantime, she beefed up her campaign schedule in Nevada on Thursday while also appearing on ABC's “The View” and holding a telephone town hall with voters in South Carolina — hoping to prolong any immediate bump the debate provides.

There's another debate in Charleston, South Carolina, on Tuesday, which could give Warren an opportunity to produce a repeat performance even as Bloomberg and the other candidates will likely be better prepared to defend themselves.

“Many voters in the later states have been frustrated that the top candidates are being decided by just two overwhelmingly white states,” Katz said.

Her debate performance left Warren's inner circle feeling as pleased as they were during the heady days of last summer and fall when its candidate rode a message of economic populism, built on proposals including a wealth tax targeting people like Bloomberg, to become a national front runner along with Biden, Sanders and Buttigieg.

Her campaign said it had its best ever fundraising day on Tuesday, raking in $2.8 million. That edged the $2.7 million in donations raised by Sanders, which his campaign said was its largest haul on a debate day.

Warren had pulled advertising from South Carolina and the improved fundraising could give her more options on when and where to get on the air before Super Tuesday.

She'll need it. As of the second week of this month, Warren wasn't spending anything on television ads in top “Super Tuesday” states. By contrast, Bloomberg at that time had already spent nearly $33 million on television advertising just in California, the largest prize on the Super Tuesday calendar. Billionaire hedge fund manager and environmentalist Tom Steyer was up to more than $16 million and Sanders was close to $3 million.

Warren's supporters are largely shrugging that off, though. They note that many of the same national airwaves where political observers questioned whether Warren's fundraising would dry up after Iowa and New Hampshire are now buzzing about how well she did in the Las Vegas debate. And there could be more where that came from, they say.

“The free media coverage of Warren skewering Bloomberg will exponentially be more valuable than any TV ad buy," said Adam Green, co-founder of the Progressive Change Campaign Committee. “Elizabeth Warren the fighter who names villains and challenges power was on full display in the Las Vegas debate, and there's every expectation that she'll continue that in the future."

Games to play with friends and family online during loc ...

AP PHOTOS: Wuhan a city in slumber before the lockdown& ...

Wuhan was released from coronaviru ...

An aerial survey of the Great Barr ...

Warren's future uncertain after loss in home state of Mass.

Warren bets on brokered convention. Will she last that long?

Warren betting that getting personal can help her rebound

Warren's new bankruptcy plan may spark a clash with Biden