Many Democratic presidential candidates launched their campaigns last year with bold pledges to reject help from super PACs and dark money groups. But as the realities of a tough primary fight sink in, those promises are fading away.

Elizabeth Warren, one of the fiercest critics of money in politics, was the latest White House hopeful this week to accept help from a big money organization that can raise and spend unlimited amounts on behalf of political candidates. Former Vice President Joe Biden, Minnesota Sen. Amy Klobuchar and Bernie Sanders have done much the same.

The Democratic battle to take on President Donald Trump is entering a critical new phase as more than a dozen states vote within the next couple of weeks with about one third of the delegates needed to win the nomination at stake. Campaign finance disclosures made to the Federal Election Commission on Thursday offered the clearest look yet at who will have the resources to forge on deep into the calendar and who will be forced to soon reckon with the sustainability of their candidacy. 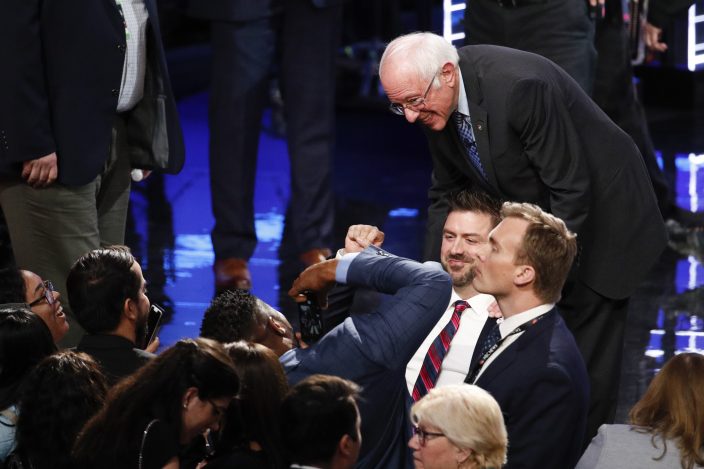 The disclosures include campaign spending and fundraising details for the month of January and laid bare the stark financial choices ahead for those other than former New York Mayor Michael Bloomberg and Sanders.

Bloomberg, a billionaire, has plunged over $400 million into his campaign, while Sanders is propelled by an army of contributors whose renewable stream of small online contributions helped him amass $25 million in January alone.

“Our campaign has built a nationwide organization that is engaging voters daily," said Bloomberg campaign manager Kevin Sheekey. "With over 2,400 staff across 43 states today, Mike is the only candidate with the record and resources to build the national infrastructure Democrats need to beat Donald Trump."

In contrast, Warren raised $10.4 million, held just $2.2 million in reserve at the month's end and took out a $400,000 line of credit. Since then, in the month of February her campaign said she has since raised $17 million, some of it after a spirited debate performance Wednesday night

Former Vice President Joe Biden raised $8.8 million in January and had $7.1 million in the bank. And Minnesota Sen. Amy Klobuchar had $2.8 million on hand, though she has raised more than $6 million since a breakout debate performance before the New Hampshire primary.

Even Pete Buttigieg, the former mayor of South Bend, Indiana, whose improbable rise to prominence was fueled in part by his massive fundraising success earlier in the contest reported taking in a lackluster $6 million in January. He also had just $6.6 million cash on hand after burning through $14.1 million that month. His campaign says he has since taken in another $11 million, but has not said how much of that he has spent.

That gives Sanders and Bloomberg an overwhelming advantage heading into Super Tuesday on March 3, when more than a dozen states will hold contests.

Party leaders have long worried that Sanders, a democratic socialist, would lose to Trump because of his embrace of left wing politics. Now, after a neck-and-neck showing against Buttigieg in Iowa, followed by a win in New Hampshire, he's the one best poised to capture nomination.

Bloomberg, with his limitless resources, has emerged as a centrist candidate who has the money to compete with Sanders. But after a widely-panned debate performance on Wednesday where he was eviscerated by Warren, some are doubting that possibility, too.

Many now rue that early days of the primary were dominated by pledges of the sources of money campaigns would reject rather than building a fundraising network to compete with Trump. Along with the Republican National Committee, he has raised more than $525 million for his reelection effort since the start of 2019.

“It was a huge mistake to try to adhere to this level of financial purity. The only person who can do it is Bernie Sanders — no one else can. Barack Obama couldn’t, Hillary Clinton couldn't and Donald Trump can’t,” said Rufus Gifford a prominent Democratic fundraiser who held high-level posts in both of Obama's campaigns. “That will be the lesson of this primary — especially if Bernie Sanders wins.”

Warren, a Massachusetts senator, was a notable addition on Thursday to the ranks of people acquiescing to help from a super PAC, which are prohibited from coordinate spending decisions with candidates they support.

"It can't be the case that a bunch of people keep them and only one or two don't," she said while campaigning in Nevada.

On Wednesday, the group Persist PAC announced it would spend more than $1 million on advertising supporting her.

“While we respect their views and agree on the need for campaign finance reform, we believe this election is too important and we want to do what we can within the bounds of existing law to support them,” said Christina Reynolds, vice president of the group EMILY’s List, which contributed $250,000 to the group, as well as another called Kitchen Table Conversations PAC that is supporting Klobuchar.

In the past, Warren and her allies sought to pressure rivals to reject their support. She sharply criticized Biden for reversing his super PAC pledge in November. The group backing him, Unite the Country, has spent $7.2 million on his behalf.

Her campaign also targeted Buttigieg, who is backed by VoteVets, an organization that operates both a super PAC. The group, which backs veterans running for office, like Buttigeig, has spent over $630,000 on ads supporting him in Nevada, which will hold its caucuses on Saturday.

Even Sanders, who has railed for years against super PACs and nonprofit dark money groups, has relied on them for help. He’s supported by Our Revolution and a handful of other nonprofits, which function much the same as super PACs but not have to disclose their donors and will not have to report the financial activity to the IRS until after the election. He founded Our Revolution after his 2016 loss to Hillary Clinton, which has taken in nearly $1 million, according to tax filings for 2016, 2017 and 2018. Much of it came from those who contributed six-figure sums. During the 2016 election he also benefited from ad spending by National Nurses United super PAC.

Warren said her reversal was prompted, in part, by Bloomberg and fellow billionaire Tom Steyer.

“They have the equivalent of a super PAC -- it’s known as their sock drawer," she said during a CNN townhall Thursday.

Soccer players in Spain on Sunday ...

Coronavirus makes it harder for campaigns to ask for money