Arizona Gov. Doug Ducey spent much of his first term working to repair the damage to the state's reputation caused by a 2010 tough-on-immigrants law known as SB 1070 that his predecessor signed.

That changed this year when the second-term Republican governor promoted a new proposal to enshrine in the state Constitution a key component of that law, a ban on so-called sanctuary city policies that limit police cooperation with federal immigration authorities.

Arizona wasn't ready, and he was forced to pull the plan late Thursday amid mounting pressure from the business community and outrage from immigrant rights groups.

Alejandra Gomez, of Living United for Change in Arizona, speaks at a news conference celebrating Republican Gov. Doug Ducey's decision to pull a contentious proposal to put a "sanctuary city" ban in the state constitution at the Capitol in Phoenix, on Friday, Feb. 21, 2020. The group known as LUCHA had mobilized in opposition to the measure. (AP PhotoBob Christie)

Ducey — a supporter of President Donald Trump, who has made immigration a signature issue — denied that his push for lawmakers to put the constitutional amendment on the ballot was a sea change. And he bristled when questioned about whether his effort would again lead to boycotts of Arizona and other problems like SB 1070 did.

But opponents of the governor's plan say it was a major about-face from his first term, when he faced pressure from the business community to halt the Republican-controlled Legislature's anti-immigration efforts. 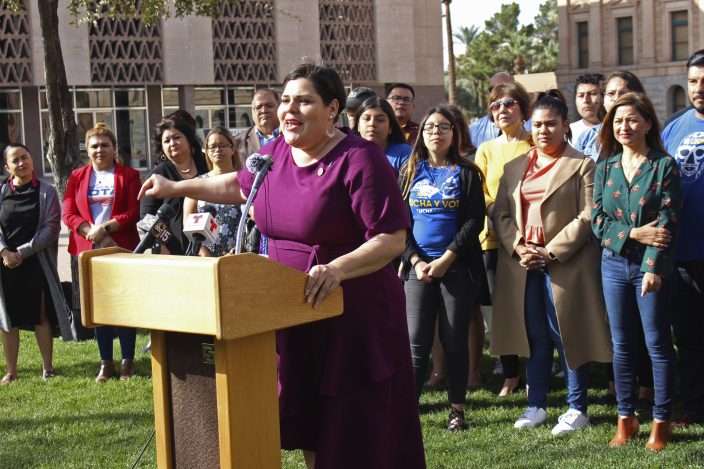 They lambasted the proposal Ducey asked for in last month's State of the State address as a return to "one of the darkest years in Arizona history." After then-GOP Gov. Jan Brewer signed SB 1070 in 2010, tens of thousands of people marched on the Capitol and some businesses boycotted the state.

The damage was deep, coming as Arizona reeled from the lingering effects of the Great Recession and a foreclosure crisis that was the worst in the nation.

Legal challenges to SB 1070 kept many of its provisions from being implemented, but courts upheld the law's ban on sanctuary policies and its key feature: a requirement that police officers, while enforcing other laws, question the immigration status of people suspected of being in the country illegally.

Instead, he worked to repair Arizona's reputation, boosting its frayed relationship with Mexico and touting the state to businesses nationwide. His staff worked behind the scenes to make it clear that he was different than Brewer and didn't want divisive legislation to reach his desk.

Ducey says his motivation for a constitutional ban was a ballot measure to create a sanctuary city in Tucson that voters widely rejected last November. City leaders in the Democratic stronghold opposed the measure, citing SB 1070's ban and the potential loss of state and federal dollars.

Democratic Sen. Martin Quezada said Thursday that Ducey had made a major political miscalculation and called it unnecessary because sanctuary policies are illegal already.

“I think he saw what happened in Tucson and he thought, ‘Hey, this is low-hanging fruit and I can slam-dunk an issue that’s really big with the Trump crowd and with the extreme element of his political base, and it’s going to pass easily if it gets to the ballot,'” Quezada said.

The lawmaker said Ducey didn't think through the move and predicted the governor would backtrack “because the reality is the people in general are kind of sick of this stuff."

Daniel Scarpinato, Ducey's chief of staff, said Friday that the issue was distracting from other parts of the governor's legislative agenda. He noted concerns from the business community and a resistant GOP lawmaker in the closely divided House whose vote would be difficult to get.

“Anytime you’re pushing a policy, the stars need to align for it to happen and get across the finish line,” Scarpinato said. “On this one, we just came to the conclusion that the stars weren’t aligning.”

The proposal gained national attention last week after a legislative hearing devolved into chaos. An immigrant rights activist called the proposal racist, and the GOP chairman cut him off and cleared out activists.

Ducey forged ahead, and Trump encouraged him at a Phoenix campaign rally Wednesday.

"Thankfully Arizona has banned sanctuary cities, and with the Republican majority in Congress, we will ban them in every state in America,” Trump said.

Pushed repeatedly about the proposal during a media availability Thursday, Ducey insisted he hadn't changed.

“This has been consistent,” he said. "I’ve been promoting Arizona, making sure I’ve differentiated us from California at every turn. I’ve been against sanctuary cities, and it's not a sea change.”

Immigrant rights activists said at a news conference Friday at the Capitol that their opposition to Ducey's plan had broad support and forced him to backtrack.

“In 2010, when Jan Brewer signed SB 1070, it ravaged our community,” said Alejandra Gomez, co-executive director of Living United for Change in Arizona. ”When Ducey gave his ... speech saying that he was going to come after our communities, moving forward against sanctuary cities, strengthening SB 1070, our communities rose to the challenge to fight back against that hateful agenda."