The Venezuelan politician bent on ousting President Nicolás Maduro with backing from roughly 60 foreign nations told The Associated Press that additional tough U.S. sanctions will soon follow, including those cutting off Maduro's sale of “blood-stained gold.”

“For me he is very trustworthy,” Guaidó said of Trump. “We had a very good meeting. I think he is a man of his word.” 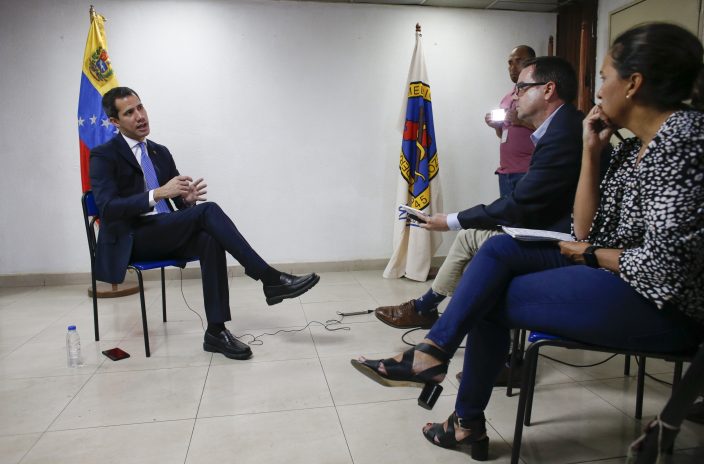 He spoke to AP in his first face-to-face interview since returning from a tour that took him across Europe and into an Oval Office meeting a year into his campaign to oust Maduro.

Guaidó, leader of Venezuela's opposition-dominated congress, said he will lead a street march in the coming weeks that comes amid a turf battle to retake the legislative meeting hall in Venezuela's capital that Maduro loyalists have forcefully blocked.

Guaidó said that during the White House meeting, Trump and the U.S. secretaries of state, defense and commerce charted plans to force Maduro from power. Guaidó said there are details he still can't discuss. 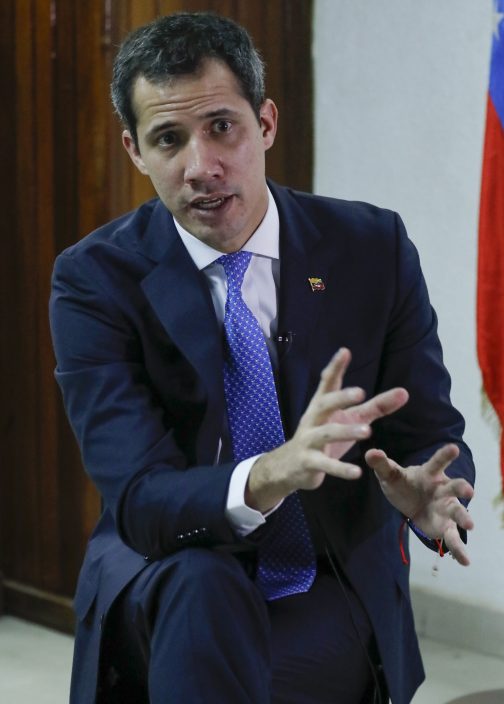 “The pressure is rising diplomatically and financially on the corrupt financiers and human rights violators,” he said.

In his time in Washington, Guaidó was embraced by officials and political leaders in both parties, but he said he has not been in contact with any other candidates in the 2020 U.S. presidential race seeking to beat Trump, including Democratic Party front-runner Bernie Sanders.

This week, the White House unveiled sanctions against a Russian state-controlled company that has helped the Venezuelan government skirt an American oil embargo and enabled Maduro to keep his grip on power.

Asked if he believes Guaidó is “still the guy to get Maduro out of office,” Trump replied: "Well, he’s the person that the country, right now, prefers, and that’s what I go with. We’ll see what happens.”

The Trump administration has been the most important ally for Venezuela's opposition since Guaidó leaped to the center of Venezuela's tumultuous political landscape more than a year ago and vowed to force Maduro from power and restore democracy.

Guaidó, 36, immediately won backing from the U.S. and dozens of nations that recognize his claim as Venezuela's interim president, saying Maduro fraudulently won a 2018 presidential election in which his most popular political opponents were barred.

Venezuelans swarmed around Guaidó believing he would bring a swift exit from two decades of socialist rule blamed for leading the oil-rich nation to a crisis that has driven more than 4.5 million Venezuelans to emigrate in recent years.

Security forces and armed civilians loyal to Maduro have blocked opposition lawmakers, including Guaidó, from entering the congress building in the center of Caracas. While Guaidó was on his three-week international trip, police occupied his offices.

Guaidó hopes his popularity has revived following the international tour and White House visit. He was a guest of Trump at the annual State of the Union address, where the U.S. president called Guaidó the “true” president of Venezuela.

When Guaidó's flew back to Venezuela, authorities detained his uncle Juan José Márquez, accusing him of trying to sneak explosives into Venezuela. Guaidó has dismissed the accusation as absurd.

The Maduro government is sending a clear signal with the arrest, Guaidó said, adding that his uncle is being held at a military police unit notorious as a place they “torture and kill" detainees.

In a possible test of his new-found momentum, Gauidó called for Venezuelans to mobilize on March 10.

He said removing an entrenched dictator is no simple task, but insisted that those on the side of democracy are winning.

“Who is weaker, and who is strong? I'm here showing my face to the people," Guaidó said, adding that walking freely among Venezuelans as he does is not a luxury Maduro and his allies have. “I'm free.”

A pandemic forcing everyone to sta ...

Opposition backers in Venezuela ask what's next for Guaidó