Prince Harry and his wife, Meghan, have abandoned plans to use the "SussexRoyal" brand after they step back from royal duties.

The couple, who are known in Britain as the Duke and Duchess of Sussex, will no longer seek to trademark the term SussexRoyal because of U.K. rules governing use of the word “royal,” their office said late Friday. The non-profit organization they plan to launch later this year also will not use the name.

“The Duke and Duchess of Sussex do not intend to use `SussexRoyal' in an territory post-Spring 2020,” their office said. 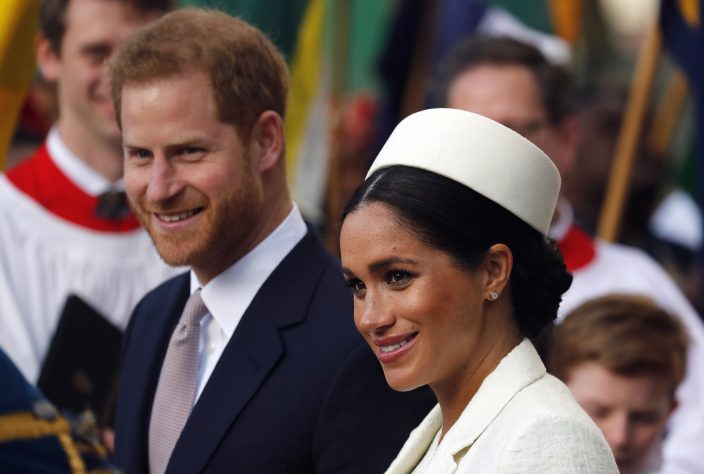 FILE - In this Monday, March 11, 2019 file photo, Britain's Prince Harry and Meghan, the Duchess of Sussex leave after the Commonwealth Service at Westminster Abbey in London. Prince Harry and Meghan Markle are to no longer use their HRH titles and will repay £2.4 million of taxpayer's money spent on renovating their Berkshire home, Buckingham Palace announced Saturday, Jan. 18. 2020. (AP PhotoFrank Augstein, file)

The couple stunned Britain in January with an abrupt announcement that they wanted to step back from royal duties. Prince Harry said the move was a “leap of faith" as he sought to build a more peaceful life — free from the journalists who have filmed, photographed and written about him since the day he was born.

Harry and Meghan said Wednesday that they would formally break free from the royal family starting March 31.

The prince and his wife will walk away from most royal duties, give up public funding and try to become financially independent. The couple are expected to spend most of their time in Canada while maintaining a home in England, near Windsor Castle.

Harry and Meghan will no longer use the titles His Royal Highness and Her Royal Highness but will retain them, leaving open the possibility that they may change their minds and return to royal duties in the future.

Prior to their decision to step backfrom the titles and responsibilities of royal life, Harry and Meghan sought to trademark the term SussexRoyal to protect it from others who would like to exploit the brand.

Rachel Wilkinson-Duffy, an intellectual property attorney at Baker & McKenzie, said their decision to drop the trademark application was surprising since unrelated parties have filed their own applications to trademark SussexRoyal.

“While Harry and Meghan may have agreed not to use the trademark themselves, pursuing the rights already applied for would have given them and the royal family a stronger basis to object to exploitative use by those seeking to capitalize on the hype in the brand,” she said.

Harry, Meghan do their last royal job at Commonwealth event

Prince Andrew's daughter Princess Beatrice to marry in May