Newman’s streak of 649 consecutive races dating to 2002 will end Sunday when he misses the second race of the 2020 season as he recovers from a spectacular last-lap crash at Daytona. The rest of the field will be back on the track after the most frightening accident in NASCAR in nearly two decades — one that made many of them think long and hard.

That includes Ryan Blaney, the driver who tried to shove Newman to the Daytona win Monday night and instead hooked Newman’s car into the spin that ultimately turned into an airborne, fiery spectacle with Newman’s car upside down and Newman trapped inside. 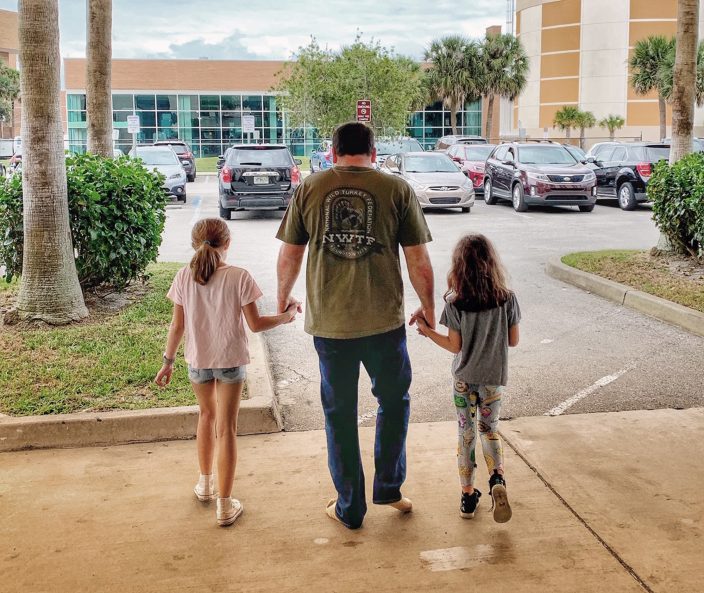 This photo provided by Roush Racing shows NASCAR driver Ryan Newman and his daughters, Brooklyn Sage, left, and Ashlyn Olivia, leaving Halifax Medical Center, Wednesday, Feb. 19, 2020 in Daytona Beach, Fla. Ryan Newman was released from a Florida hospital on Wednesday, about 42 hours after his frightening crash on the final lap of the Daytona 500.(Roush Racing via AP)

Blaney was clearly distraught after the race as he paced outside his car, even resting his head in his arms on the roof. He broke his silence as he headed to Las Vegas.

“Have been replaying the events in my head over and over about what I could’ve done differently ever since,” Blaney wrote in a long social media post. “I’m very lucky to have a great family, friends, team and incredible fans that have helped me out this week. I can’t wait to have Rocketman Ryan Newman back at the track racing as hard as ever.”

Ross Chastain will drive the No. 6 Ford in place of Newman. Roush Fenway Racing has not revealed any details about Newman’s potential injuries, but the 42-year-old Indiana native walked out of the hospital holding hands with his two young daughters less than 48 hours after an accident that appeared fatal. 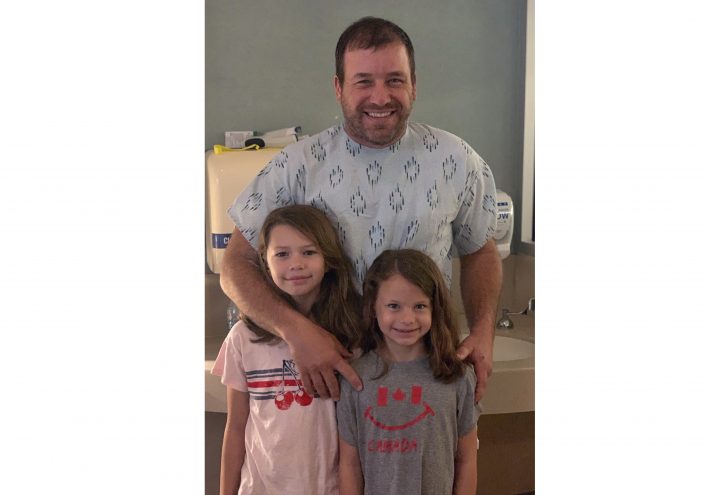 NASCAR’s last fatal crash in the Cup Series was Dale Earnhardt on the last lap of the 2001 Daytona 500, and a massive safety push after that incident has limited serious injuries in the 19 years since. Kyle Busch broke both his legs in a 2015 crash at Daytona, Denny Hamlin broke a vertebra in his lower back in a 2013 crash in California and Aric Almirola broke his back in a 2017 crash.

But they all got out of their cars.

As did Austin Dillon, when he was pulled out of the window of his overturned car after tearing out a chunk of fencing at Daytona. Kyle Larson got out of his car after it went airborne. 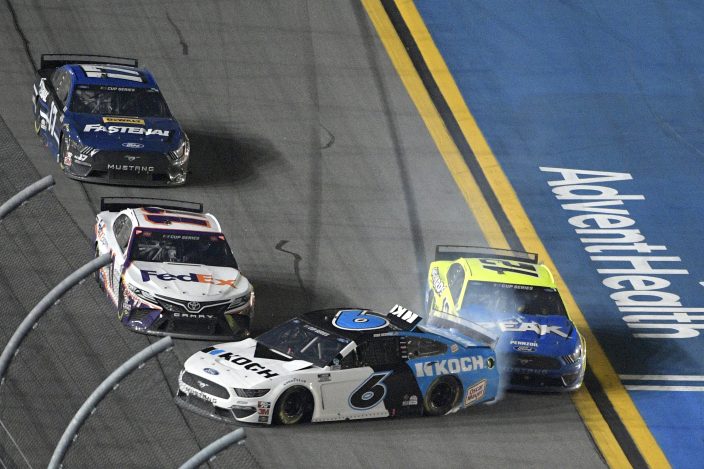 Ryan Newman (6) gets turned into the wall by Ryan Blaney (12) as Denny Hamlin (11) misses them along the front stretch to win the NASCAR Daytona 500 auto race at Daytona International Speedway, Monday, Feb. 17, 2020, in Daytona Beach, Fla. (AP PhotoPhelan M. Ebenhack)

And so did Newman, who for his entire 19-year Cup career has railed against the dangers of superspeedway racing and rightfully so — the winner of the 2008 Daytona 500 has flipped in superspeedway races several times. He leaned on NASCAR to add a support bar to the cockpit today referred to as “The Newman bar.”

“After I tore down the fence and walked out immediately with nothing, I definitely feel like these cars are the safest things out there,” Dillon said Friday. “But it just goes to show you that you can be impacted in the wrong way and it can be compromised. We’re going 200 mph around each other and sometimes force just overtakes what we know is safe.”

The fears created Monday night came from the length of time it took Newman to be cut out of the car — nearly 20 minutes — and the two-hour wait for information after he was taken to a hospital. At that point, NASCAR said only that he had injuries that were not life threatening. 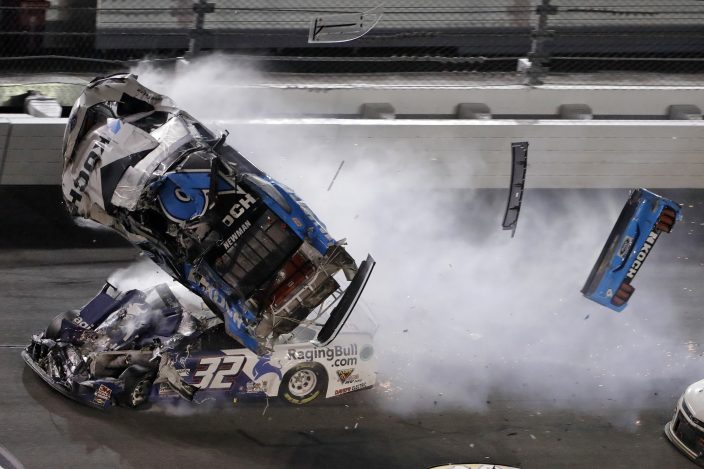 The not knowing was difficult for a generation of drivers who have been fortunate to avoid the inherent danger of auto racing.

“When there’s a guy that’s getting extricated from a car you always fear the worst, right?” Busch said, acknowledging the passive attitude that has been created in 19 years of safety improvements.

“You get numb to it a little bit because people just jump out of the cars,” Dillon said. “You just kind of say, ‘It’s (a crash is) safe enough, you’re just going to be a little sore the next day.’ Then, you watch how long it took Ryan to get out, the amount of people it took to get him out and the safety workers doing their job, it definitely makes you think differently about it, for sure. The ‘it can happen.’ You never think about that, but it’s like man, you can actually get hurt.”

They will race as scheduled Sunday — NASCAR raced seven days after Earnhardt’s sport-changing fatality — and each driver will have to process their emotions individually. Dillon recalled racing a week after his 2015 crash at Daytona.

“We put ourselves in that situation knowing what we’re getting ourselves into,” Dillon said. “I know that when I went to Kentucky the next week, I just got in there and ran. I wasn’t sore, I was ready. The only thing I had done during the week was talk more about it. It’s part of what we do as race car drivers and I think that’s why people come watch us. We do put our lives on the line for this stuff. It’s engaging for the fans to see. It’s dangerous and that’s a part of it, it’s a part of the sport.”

Busch, who missed 11 races as he healed from his injuries, didn’t have it so easy upon his return.

“It was tough for me. I was out for a while,” he said. “And then getting back in the car ... you certainly have some of that in the back of your mind to start with and to get back in. ‘Man, if I get back in and crash right away, is that going to end it all over again.’”

Busch even likened it to the anti-hero Rowdy Burns from “Days of Thunder.” Busch considers himself to be a living version of the Burns character and his nickname is “Rowdy.”

“It’s kind of the Rowdy Burns aspect - he was out with a head injury and they said you can never race again and if you ever race again, you’ll probably die,” Busch said. “You kind of think of those situations, but you try to put it out of the back of your mind as much as possible and just get out there and do your job. It took me five weeks to get back into the circle of things and be able to win again.”

Newman's return to racing is an open question and Roush Fenway is not scheduled to give an update until before Sunday’s race. But several drivers have either spoken with him briefly or exchanged texts and said Newman’s wit remained intact.

“I texted him and said, ‘I knew it wasn’t your neck that broke. I don’t think you could do that,’” said Joey Logano. “We have a neck joke going back and forth because I’ve got a long one and he’s got none. We had a good joke about that at least, so his sense of humor still seems to be there.”

Truex races into 2nd round with win in opening playoff race