Tim Southee and debutant Kyle Jamieson shared eight wickets as New Zealand bowled out India for 165 Saturday on the second day of the first cricket test.

India resumed at 122-5 and New Zealand needed only 13.1 overs and 50 minutes to wrap up its first innings, taking full advantage of a decision to bowl on winning the toss.

Southee took 4-49 and Jamieson, who had three wickets by the end of the first day, took 4-39 as India struggled against seam and swing. 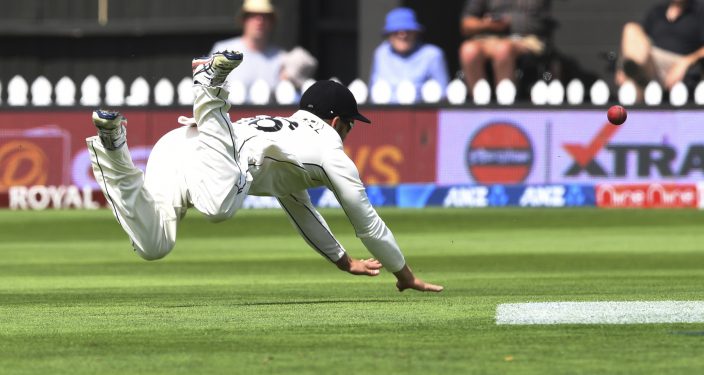 At lunch on the second day, New Zealand was 17-0 after eight overs with Tom Latham 11 and Tom Blundell 6.

The quick dissolution of the Indian first innings began Saturday with the run out of wicketkeeper Rishabh Pant. Pant, 10 not out overnight, was 19 when he sacrificed himself after a classic mixup with Ajinkya Rahane, who started the day on 38.

Rahane forced a short ball from Southee towards Ajaz Patel at point and set off. Pant, who as the non-striker should have made the call, said no but Rahane came on anyway. Patel had only stump to aim at but his lobbed throw hit directly and Pant was left well short of his ground.

Ravi Ashwin was out next ball, Southee's first wicket in a superb spell Saturday. Bowling from wide on the crease, Southee angled a full delivery towards middle stump and the ball straightened past the bat and hit off. Southee dismissed opener Prithvi Shaw in almost identical circumstances Friday.

Rahane, who seemed unsettled by the run out of Pant, was next to go. Southee produced another superb delivery from wide on the crease; Rahane got into line and tried to leave but made that decision too late. The ball took the inside edge and just carried to wicketkeeper B.J. Watling.

Ishant Sharma became the fourth wicket in Jamieson's outstanding debut. He could only fend at a shorter ball from the tall fast bowler which compelled him to play and was caught by Watling when the ball nipped away.

Mohammed Shami rode his luck and offered numerous chances on his way to 21 from 20 balls before Southee ended his and India's innings when he skied a ball to point.

AP PHOTOS: Virus haunts the destitute living on the mar ...

In a housing complex in the Morocc ...

AP Was There: Snead tops Hogan in playoff to win ' ...

Jamieson has 5 wickets for NZ vs India, 1st day of 2nd test