John Tonelli’s No. 27 has been raised to the rafters at Nassau Coliseum, joining some of his former teammates from the New York Islanders’ Stanley Cup dynasty.

Tonelli, known as a gritty player who worked to get the puck in the corners, became the seventh player to have his number retired by the team when he was honored before Friday night's game against the Detroit Red Wings.

“Tonight is not about me,” Tonelli said. “It’s all about giving thanks to my extended family, each and every one of you here and at home tonight. All of you have played a starring role in the journey that has brought this extremely honored and humbled man before you. Tonight is about my teammates, some of whom are standing with me. ... I feel incredibly honored to have skated alongside each of you and to be part of the success that we achieved as a team.”

Former New York Islander John Tonelli, center, stands with his mother, Joy, second from left; wife, Lauren; and sons Jordan and Zach as he watches while his jersey No. 27 is raised to the rafters during his jersey retirement ceremony Friday, Feb. 21, 2020, in Uniondale, N.Y. (AP PhotoKathy Willens)

Tonelli is the first Islander to get his number retired since Bryan Trottier (19) in 2001. Dennis Potvin (5), Clark Gillies (9), Mike Bossy (22), Bobby Nystrom (23) and Billy Smith (31) had their numbers retired previously. They were all part of the teams that won four straight Stanley Cup championships from 1980-83.

Five of the six were in attendance for Tonelli’s big night. Bossy was unable to make it, but a congratulatory video message was played in the arena.

The 62-year-old Tonelli also was joined by his wife, Lauren, sons Jordan and Zack, and his mother, Joy. NHL deputy commissioner Bill Daly was in attendance as well. 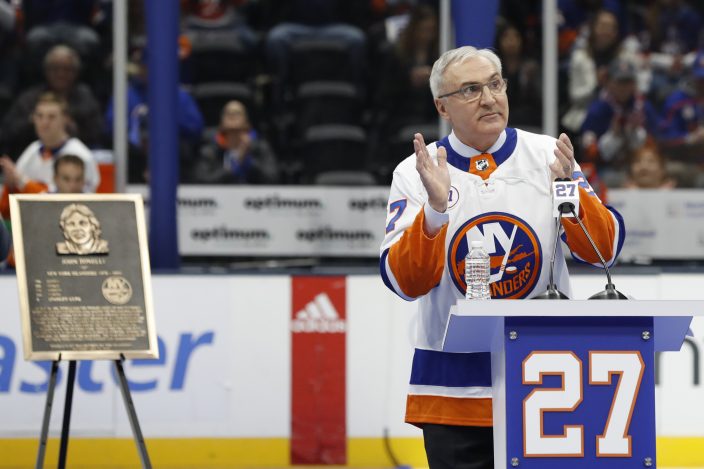 Tonelli, who had 206 goals and 338 assists in 594 games over eight seasons with the Islanders, was shown a bronze plaque that will be displayed in the team’s Hall of Fame. Islanders owners Jon Ledecky and Scott Malkin presented him with a framed No. 27 jersey and painted portrait by Tony Capparelli among other gifts.

In a speech that lasted about 15 minutes, Tonelli thanked coaches from his WHA and juniors days, as well as former teammates for sharing in his success. He also praised Al Arbour, the late longtime coach of the Islanders, who has a banner with 1,500 — the number of games he coached the team — also hanging in the rafters.

“Thank you Al for believing in all of us,” Tonelli said. “Thank you for making us all feel important, to be proud of our roles, for knocking us down when were too cocky and for picking us up when we were down.” 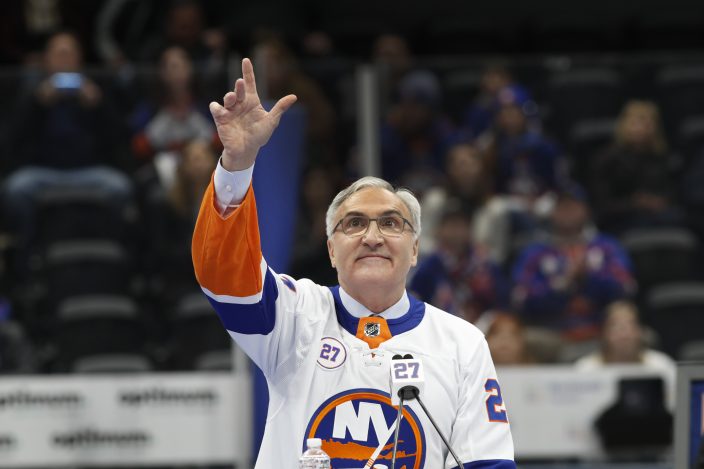 Tonelli referenced the goal in overtime of Game 7 against the Philadelphia Flyers that gave the Islanders their first championship, when he sent a pass through two defenders to a streaking Nystrom for the win.

He also spoke glowingly about Butch Goring, who will have his No. 91 retired on Feb. 29 before the Islanders’ game against Boston. 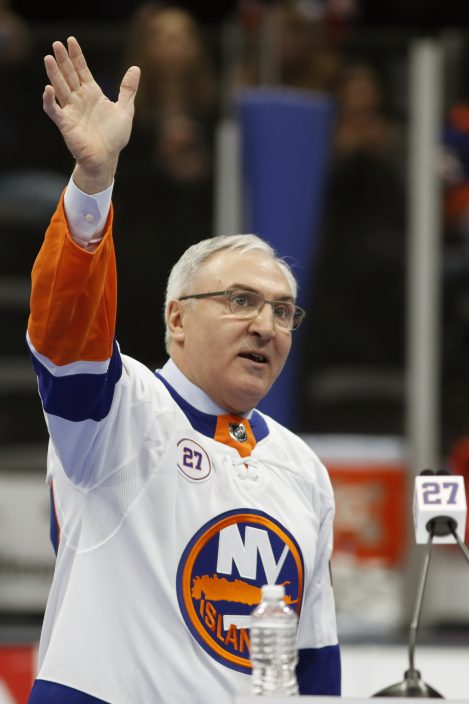 “Prior to his arrival, we were a pretty good hockey team but we were missing something,” Tonelli said. “Butch you were an inspiration to play with and I’m truly looking forward to standing at ice level next Saturday and watching this tremendous honor bestowed upon you.”

Tonelli had a frosty relationship with the Islanders after he was traded to Calgary on March 11, 1986. It began to thaw the last few years after Malkin and Ledecky took over control as majority owners and began actively honoring former players. It’s part of the buildup to the team’s planned move to a new arena at Belmont Park for the 2021-22 season.

“Jon and Scott, thanks for bringing me back home,” Tonelli said. “This barn is the place where I came prepared to play the game with the responsibility to play it hard for my family, my teammates, my coaches, the training staff and most of all my extended family — all of you, the fans.” 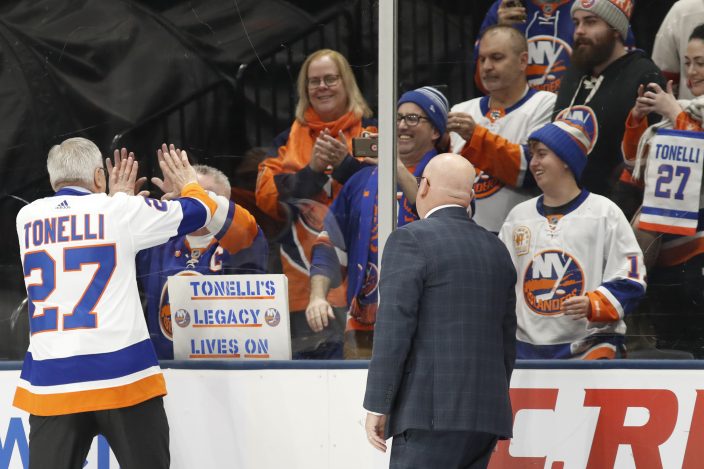 Former New York Islander John Tonelli, left, greets a fan on the other side of the glass as he leaves the ice following his jersey retirement ceremony Friday, Feb. 21, 2020, in Uniondale, N.Y. (AP PhotoKathy Willens)

Tonelli said he had “trust” in general manager Lou Lamoriello and coach Barry Trotz, and thanked the current Islanders — all of whom watched the ceremony wearing No. 27 Tonelli jerseys on the bench — for “the pride you bring to us alumni.”

He also singled out team captain Anders Lee, who currently wears the number that was retired for Tonelli.

“I am so proud and so honored you will continue to wear our No. 27,” Tonelli said. “I also look forward to the day we can share it all the way to the top of the rafters.”

Stuck in the same bind as many oth ...

AP PHOTOS: Virus haunts the destitute living on the mar ...

In a housing complex in the Morocc ...