Around 10,000 protesters marched through the central German town of Hanau on Sunday to mourn the nine people who were killed by an immigrant-hating gunman four days ago.

“These days and hours are the blackest and darkest our town has ever experienced during peace times,” Hanau mayor Claus Kaminsky told the somber crowds, according to the German news agency dpa. But, he said, those who want to pull apart society won't succeed, “because we are more and we will prevent that.”

A 43-year-old German man shot to death nine people in the Frankfurt suburb on Wednesday before apparently killing his mother and himself. Five of the victims were reported to be Turkish citizens. The attacker left rambling texts and videos in which he espoused racist views, called for genocide and claimed to have been under surveillance since birth. 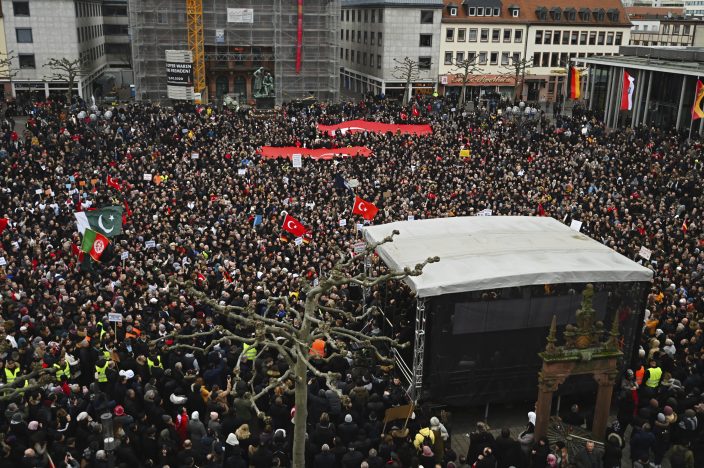 Thousands of people take part in the final rally of a funeral march in Hanau, Germany, Sunday, Feb. 23, 2020. Several people were killed in a shooting in the central German city late Wednesday, Feb. 19, 2020. (Nicolas Armerdpa via AP)

Turkey's ambassador to Germany, Ali Kemal Aydin, warned that Turkish immigrants in Germany are experiencing more and more hate crimes in the country.

“This cannot and this must not continue,” Aydin said at the protest.

The racist killings were Germany's third deadly far-right attack in a matter of months. The rampage followed October’s anti-Semitic attack on a synagogue in Halle and the slaying in June of a regional politician who supported Chancellor Angela Merkel’s welcoming policy toward migrants. 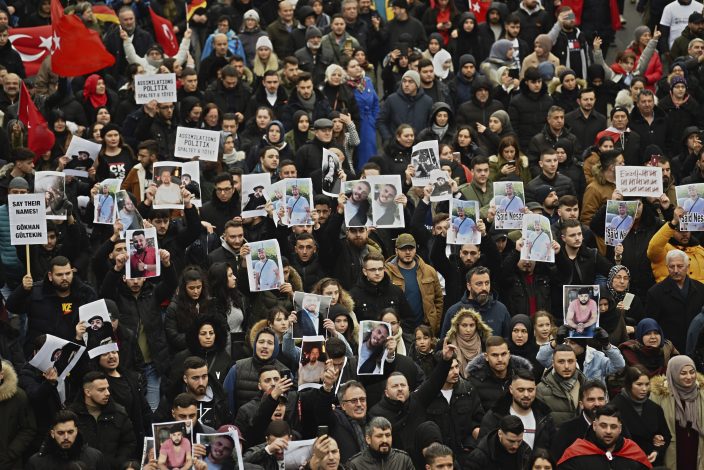 The killings come at a time when the far right, anti-immigrant Alternative for Germany has become the country's first political party in decades to establish itself as a significant force on the extreme right. All of the victims had immigrant roots and many are accusing the party of producing a climate where right-wing extremism and racism can flourish.

There have been daily candle vigils for the victims since the shooting and another big protest against racism on Saturday that also drew thousands. A memorial for the victims is planned for later this week.

There are bottles of sanitizer gel ...

Grief, anger and calls for action after shooting in Germany

Lebanon-born man dies after being shot in Berlin