Axé is the vital cosmic force in the Afro-Brazilian religion Candomblé and Grande Rio was calling upon tens of thousands of spectators in the Sambadrome's bleachers and tens of millions watching at home to accept people of Afro-Brazilian faith amid a wave of harassment linked to the spread of evangelical Christianity here.

As Portuguese Catholic colonists brought African slaves to Brazil, the enslaved men and women developed syncretic blends of their traditional religions with Catholicism, now practiced by about a tiny minority of Brazilians. 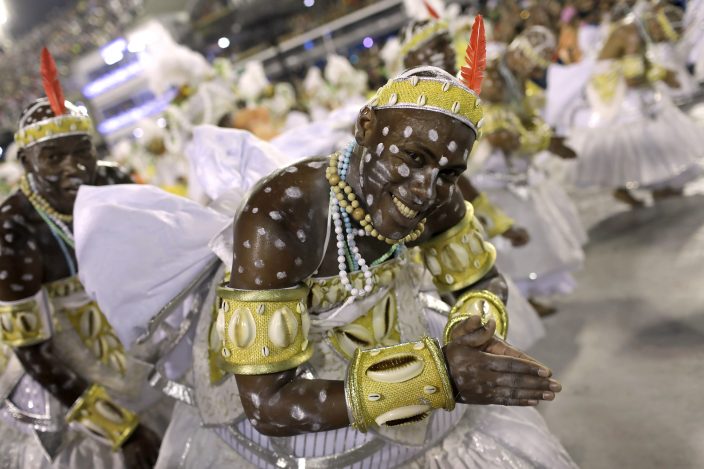 In Rio, the state that’s home one quarter of the practitioners of Afro-Brazilian religions, there's been a proliferation of evangelical Christianity, particularly neo-Pentecostal churches founded since 1970 that focus on spreading their faith among non-believers. Experts say that while most neo-Pentecostal proselytizing is peaceful, the spread of the faith has been accompanied a surge of intolerance against traditional African-influenced religions ranging from verbal abuse and discrimination to destruction of temples and forced expulsion from neighborhoods.

Members of the Grande Rio school, like Jaciel Henrique, said they were using Rio's traditional Samba school competition to tell the world to know that traditional African-influenced religions like Candomblé need respect and protection.

“We want to be respected, and Carnival is about that,” Henrique said at the school's rehearsal earlier this month in Duque de Caxias, a city north of Rio. “Respect where everybody unites and gets together in favor of one power: happiness.” 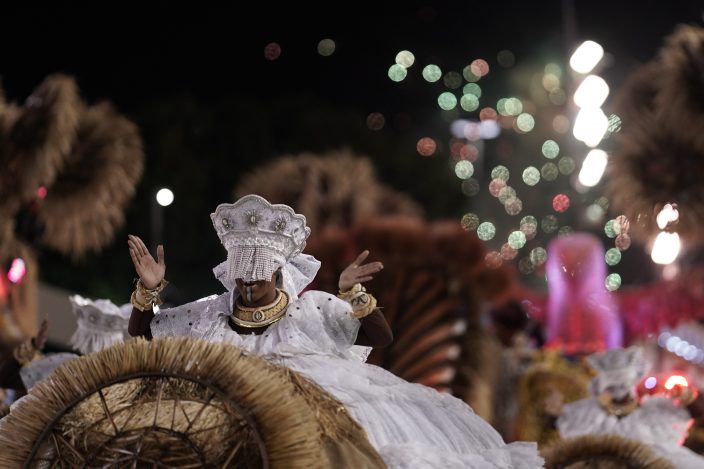 Duque de Caxias is part of the sprawling Baixada Fluminense region, where Rio on Feb. 17 inaugurated a center for victims of religious intolerance to file claims and get legal, social, psychological support. Within four days, a teenage boy of Candomblé faith reported that school directors had prohibited him from attending class in his traditional white garb.

Afro-Brazilian religions are directly tied to the creation of Rio’s samba schools, and Carnival samba lyrics citing Candomblé deities, or orixas, have been a constant since the 1960s, said Luiz Antônio Simas, a prominent Carnival historian. Grande Rio’s theme is the first to focus on the issue of religious intolerance, he said.

Its parade this year presented the story of Joãozinho da Gomeia, a Candomblé priest from northeastern Brazil's Bahia state who moved in 1947 to Duque de Caxias. He was jailed for practicing folk healing. Most of the school's parade presented his story, and their song repeated one verse that inevitably prompted the crowd to join in singing: “I respect your Amen/you respect my Axé.” 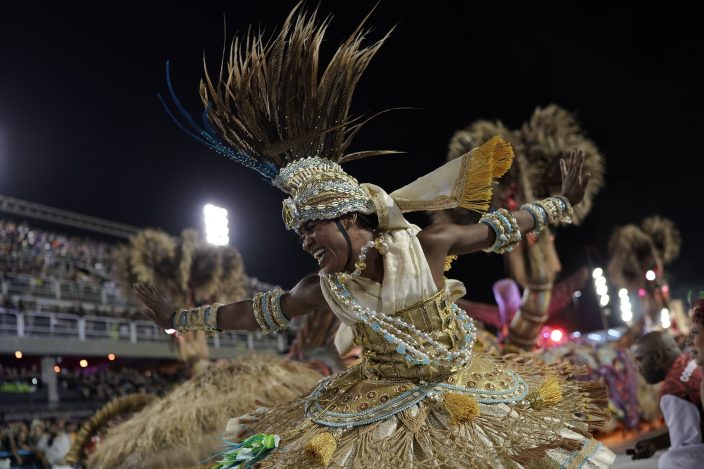 Another samba school, Mangueira, also highlighted religious intolerance at times during its parade on Sunday. One group of women with a Candomblé orixa's name emblazoned on their skirts whirled about with a cross on their backs. A lyric in Mangueira's samba said “prophets of intolerance” were again putting nails through Jesus' body, and the school was joined by an inter-faith group of 20 religious leaders holding a banner that read “Independent of your faith, respect should prevail.”

Brazil's most recent census found some 600,000 practitioners of Afro-Brazilian faiths -- just 0.3% of the population. The religions are often demonized in neo-Pentecostal churches, said Márcio de Jagun, the state government’s superintendent for promoting religious freedom. Some of the faithful take matters into their own hands and, in rare instances, evangelical pastors have been found explicitly directing radicalized evangelicals to dispense violence.

Last August, police arrested a group of drug traffickers in Duque de Caxias for terrorizing Afro-Brazilian religious groups and trashing their temples; they had been following orders from a pastor known as “Big Fish,” a detective said at the time. 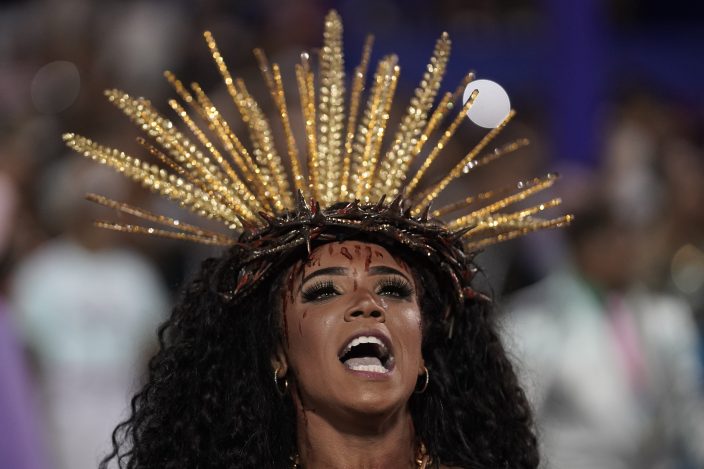 In the 1970s, Brazil was more than 90% Catholic, according to the Pew Research Center. That number had plunged to below 65% in the census of 2010. A December survey by Datafolha of almost 3,000 Brazilians found just half declared themselves Catholic and 31% evangelical; the pollster didn’t specify a breakdown of Pentecostal, neo-Pentecostal or other. Some experts say Catholicism will be overtaken in just over a decade.

Evangelicals provided crucial support for President Jair Bolsonaro’s 2018 election, and he’s shown his gratitude. Since taking office, he participated in 17 public events tied to evangelical churches, more than quadruple any other faith, according to a study this month by newspaper O Globo. His most recent one was Feb. 15 alongside Mayor Marcelo Crivella, an evangelical bishop himself, on a beach across from Rio’s iconic Sugarloaf Mountain.

Brazil “is changing because it has a government that respects family, owes loyalty to its people, and believes in God,” Bolsonaro told the cheering neo-Pentecostal crowd, which numbered in the tens of thousands. 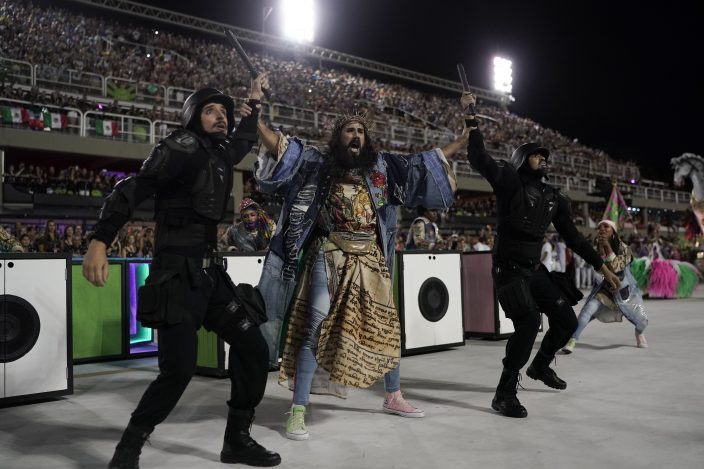 Rio has worked to implement a series of public policies since 2017 to tamp down religious strife. One was the creation of a council to defend religious freedom, whose members come from 21 denominations and meet monthly. There are representatives from various Christian faiths -- Anglican, Catholic, Lutheran and more -- but no neo-Pentecostals, despite repeated invitations extended to church leaders, said de Jagun, who himself is a Candomblé priest. Likewise, there was no neo-Pentecostal leader among the group holding the banner during Mangueira's parade.

Neo-Pentecostal evangelicals weren’t expected to watch the colorful parades of Mangueira nor Grande Rio, nor hear their calls for tolerance, said Simas, the Carnival historian. Nevertheless, he said the parade's reverberations will be felt outside the Sambadrome.

“TV broadcasts it, the school parades in the street during its rehearsals, so it winds up overflowing and in a certain way leaving the bubble,” he said. “Putting this on the agenda for debate brings the dramatic issue beyond Carnival, beyond Rio de Janeiro, even beyond Brazil, to show what’s happening.” 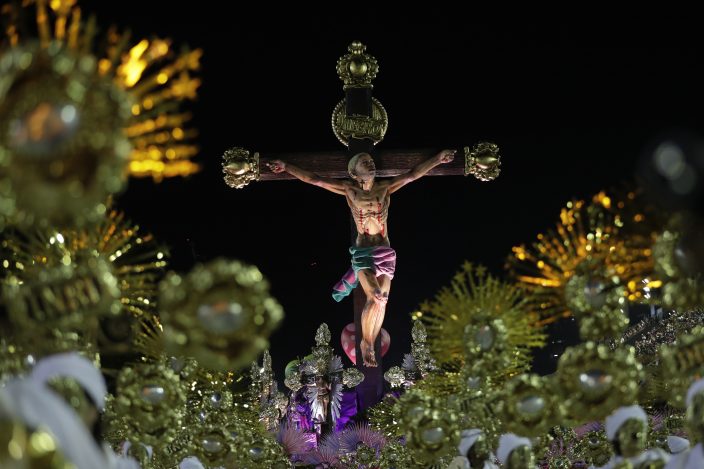 Georgina da Silva, a diminutive 70-year-old who paraded with Grande Rio, crossed the finish line brimming with energy, and lines of sweat shining in the creases around her smiling eyes. She was raised with Candomblé in Duque de Caxias, and even met the famous priest, Joãozinho da Gomeia, as a girl. Now her grandchildren live there, and she's proud of her samba school for tackling an important issue.

“We gave our message without offending, without hurting anyone. All we did was give our message,” da Silva said. “Now let's wait to see what people think.” 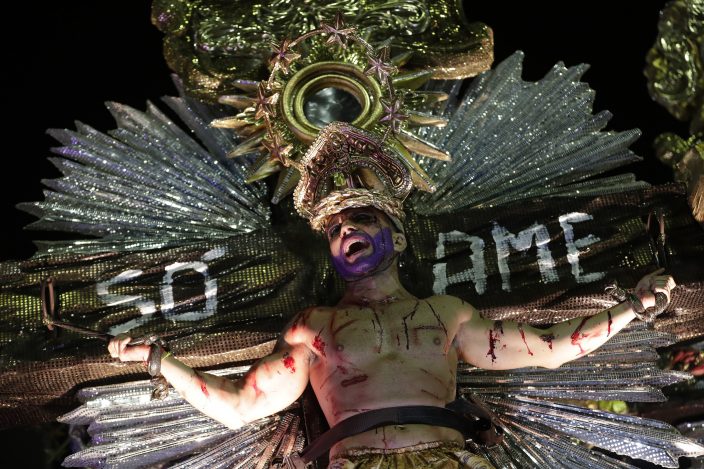 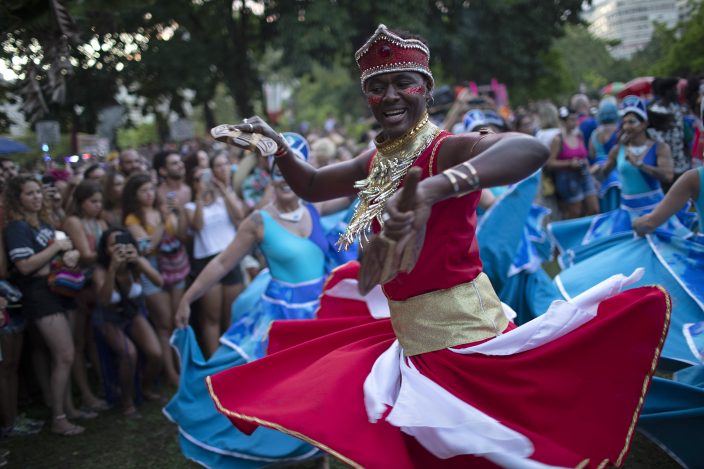 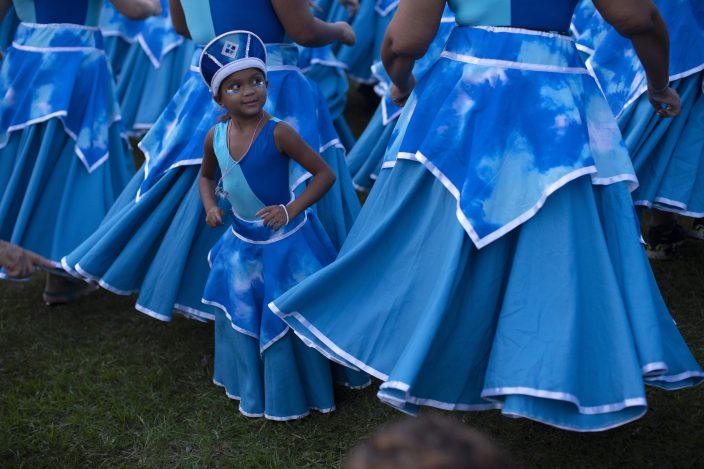 A young performer stands with her troupe during the "Tambores de Olokun" street party in Rio de Janeiro, Brazil, Saturday, Feb. 15, 2020. Thousands have started attending the popular street parties ahead of the world's famous carnival festival that begins on Feb 21. (AP PhotoSilvia Izquierdo)

FIFA is looking to tap into its va ...