Steve Ross, a Holocaust survivor who founded the New England Holocaust Memorial and spent decades searching for a soldier who helped him at a concentration camp in 1945, died Monday, Boston Mayor Marty Walsh said in a tweet.

“Today Boston lost a giant, and the world quite honestly lost a giant,” Walsh said in the tweet. “Here’s a man who could have given up several times in his life and he didn’t. I’m very sad today at the loss of Steve Ross.”

Ross had been in hospice care for the past couple of months, said Roger Lyons, director and producer of a film about Ross. Documents list him as having been 88 years old, but he was believed to be 93, Lyons said. 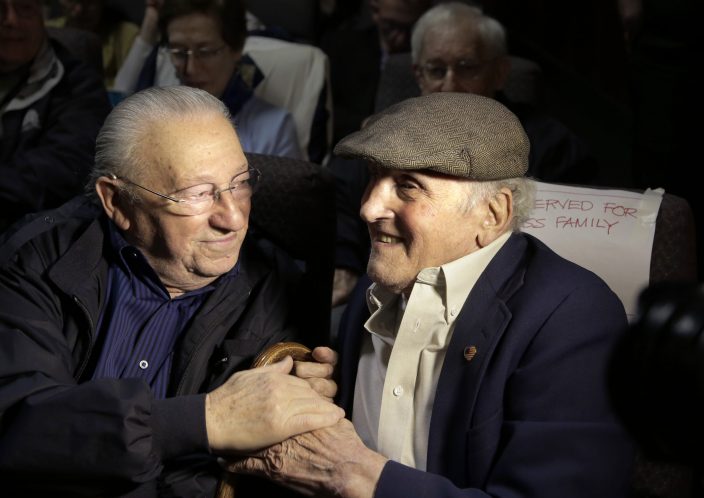 FILE - In this June 7, 2017, file photo, Holocaust survivors Israel Arbeiter, left, and Steve Ross greet one another at a theater before the premier of the film "Etched in Glass: The Legacy of Steve Ross," in West Newton, Mass. Ross, a Holocaust survivor who spent decades searching for the soldier who helped him at a concentration camp in 1945, died Monday, Feb. 24, 2020, Boston Mayor Marty Walsh said in a tweet. (AP PhotoSteven Senne, File)

Ross, who came to America as a refugee orphan after World War II, was known to share his stories of the horrors of Nazi death camps. He is said to have spent five years in 10 different concentration camps as a boy. On at least two occasions, he was marching in a line of prisoners on their way to death when he was able to escape — once by hiding neck-deep in the feces under an outhouse and another time by clinging to the bottom of a train that set into motion, carrying him to another camp, said Tony Bennis, co-producer and editor of the film “Etched in Glass: The Legacy of Steve Ross.”

Ross was rescued in 1945 from the Dachau concentration camp, where he had an interaction with an American soldier who restored his will to live. The soldier hugged him, gave him food, and handed him a handkerchief that turned out to be a little American flag.

“My father was absolutely transformed by that small act,” Michael Ross, a former Boston City Council president, said in 2017. “It helped him regain his faith in humanity. It shows that these things we do in life have profound consequences. That how we treat each other matters.”

Ross’ search for the soldier was featured on the popular television show “Unsolved Mysteries” in 1989. But it wasn’t until decades later that the family of Lt. Steve Sattler, who died in 1986, connected the dots.

The two families met at a Veterans Day ceremony at the Massachusetts State House in 2012.

Sattler’s granddaughter, Brenda Sattler, who played a key role in making the connection, said in 2017 that the bond forged between the two families was surreal.

“The biggest impact to me is being proud of grandpa for being that soldier,” she said.

After serving in the U.S. Army during the Korean War, Ross became a social worker helping children in some of Boston’s toughest housing projects.

Ross had lived in Newton for many years and previously lived in Dorchester and Jamaica Plain, the Boston Globe reported.

In his later years, he would talk to high school students about his Holocaust experience and address swearing-in ceremonies for new U.S. citizens. Dressed in garb similar to what prisoners wore in the death camps, he would faithfully recount the story of the kind soldier and carefully unfurl the American flag handkerchief.

“He spoke to youth so powerfully about the need to combat racism and bigotry,” Bennis said.