A woman wearing vinyl gloves on a subway train. Guests donning masks at a sparcely attended wedding ceremony. People feverishly stocking up on instant noodles and rice. Friends calling each other and asking if they're still alive.

Fears of a soaring viral outbreak are gripping the South Korean city of Daegu and the surrounding area, with residents struggling as they try to stay away from a virus that has already sickened hundreds of people in the region, killing at least 10 of them.

“I’m also a human being and scared of contracting the virus,” Choe Hee-suk, a 37-year-old office worker in Daegu, a city of 2.5 million people in the country's southeast, said by phone. “We call each other here and half-jokingly ask whether they are alive and tell each other not to wander around.” 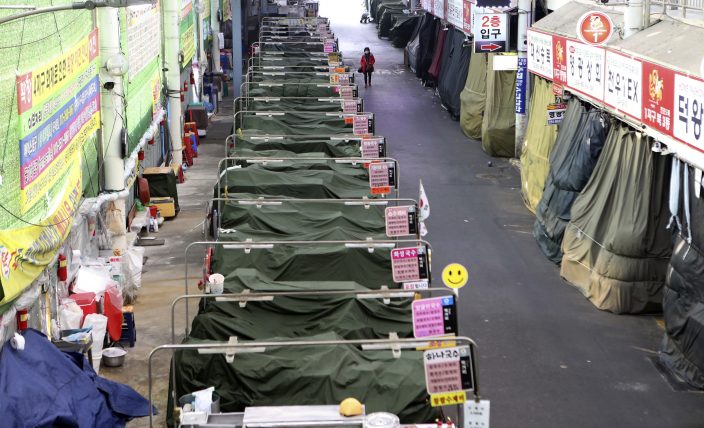 FILE - In this Feb. 21, 2020 file photo, Noodle stands inside a traditional market are idle in Daegu, South Korea. As fears of a soaring viral outbreak grip the southeastern South Korean city of Daegu and nearby areas, many residents are struggling as they try to avoid the new virus. (Kim Hyun-taiYonhap via AP, File)

The region hadn’t reported a single case until Feb. 18, when a Daegu woman in her early 60s tested positive for the virus that first emerged in China, becoming the area’s first patient.

But a week later, over 790 cases have been reported there, a sudden jump that has prompted concerns that the outbreak is getting out of control.

The Daegu region accounts for over 80% of South Korea’s nearly 1,000 virus cases and all of its deaths. South Korea has seen the largest outbreak of the virus outside mainland China, which has confirmed more than 77,660 cases and over 2,660 fatalities. 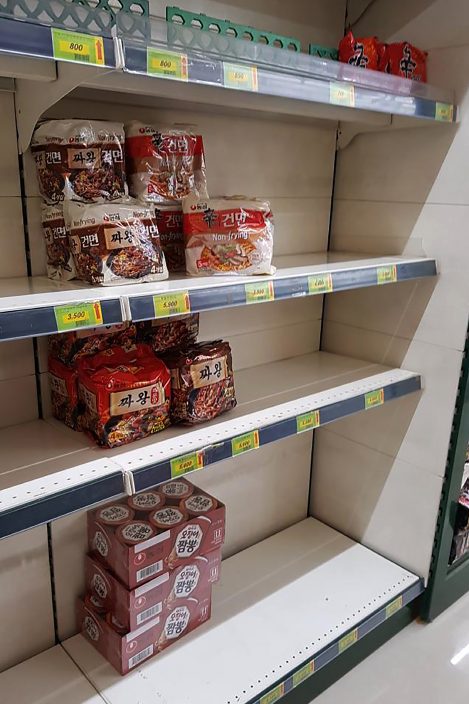 FILE - In this Feb. 21, 2020 file photo, Packages of instant noodles are displayed on almost empty shelves at a supermarket in Daegu, South Korea. As fears of a soaring viral outbreak grip the southeastern South Korean city of Daegu and nearby areas, many residents are struggling as they try to avoid the new virus. (AP PhotoNoh Yeo Jin, File)

More than half of the cases in the Daegu area are linked to a controversial church that is viewed as a cult by mainstream Christian organizations.

The region’s first patient is a member of the Shincheonji Church of Jesus who had attended services before being diagnosed with COVID-19, the disease caused by the new virus. Authorities say it’s unlikely that the woman, who has no record of recent overseas travel, set off the chain of infections. 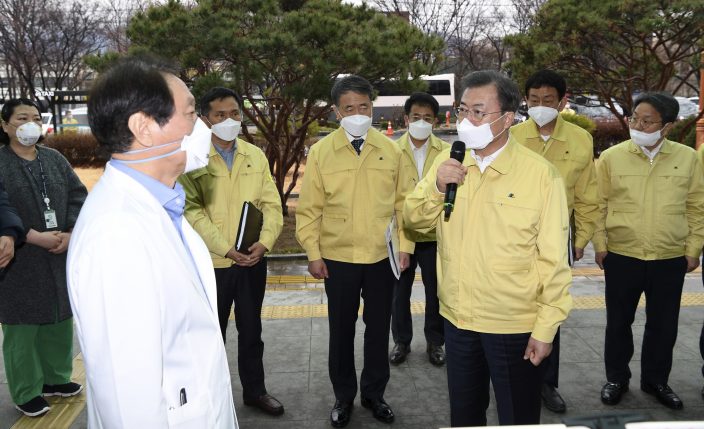 South Korean President Moon Jae-in, front right, talks to a president of Daegu Medical Center, You Wansik, at the Daegu Medical Center in Daegu, South Korea, Tuesday, Feb. 25, 2020. China and South Korea on Tuesday reported more cases of a new viral illness that has been concentrated in North Asia but is causing global worry as clusters grow in the Middle East and Europe. (Bae Hun-shikNewsis via AP)

Oh Sang-hak, a taxi driver, said he hadn’t worked for several days because he was uneasy about picking up strangers with the virus circulating in the city.

“It’s like time has stopped ... and there is just no movement,” Oh said. “Until last week, we thought the coronavirus was someone else’s problem.” 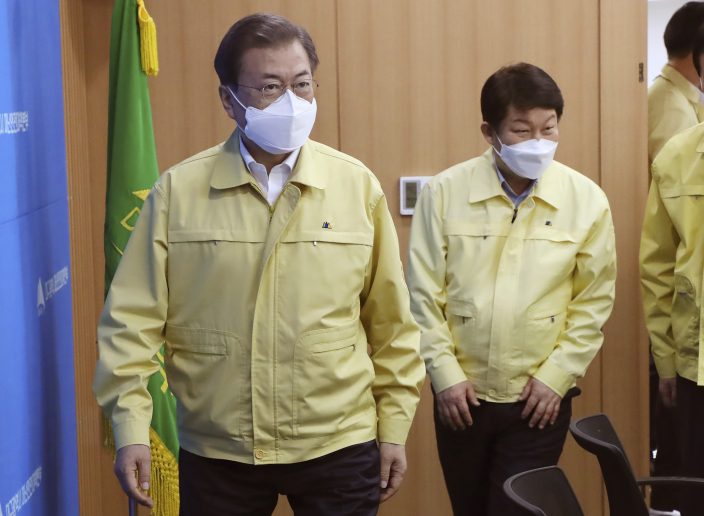 South Korean President Moon Jae-in, left, arrives to preside over a special government meeting to discuss measures to prevent the further spread of COVID-19 at the Daegu City Hall in Daegu, South Korea, Tuesday, Feb. 25, 2020. China and South Korea on Tuesday reported more cases of the new viral illness that has been concentrated in North Asia but is causing global worry as clusters grow in the Middle East and Europe. (Han Sang-kyunYonhap via AP)

Lee Nag-hyeon, 63, said he thinks media reports on virus fears in Daegu have been a bit exaggerated. But he said he saw a masked woman wearing a pair of disposable gloves when he took a subway on Monday. He said he also heard about convenience store staff wearing goggles when dealing with customers.

On Monday, people wearing masks stood in long lines outside an Emart discount store in Daegu’s Mancheon district as they tried to stock up on face masks, which have also been quickly selling out online.

Choe, the office worker, said she had three boxes of ramen, four boxes of cereal and three 20-kilogram (44-pound) bags of rice at her home. Lee said he began writing on his masks the dates he last wore them to re-use later, when there are no more available for sale.

At Daegu’s Gyodong traditional market on Monday, about half of the roughly 1,000 shops were closed, with the number of visitors declining recently by more than 90%.

“Maybe it would be better for all the merchants to shut their doors, but their means of a living are here. So some have made the difficult decision to open their shops,” said Ahn Sook-hee, an official at an association of merchants at the market.

The virus is also changing the scenes at weddings and funerals, events that typically draw large crowds in South Korea.

At Daegu’s Gangbug Convention wedding hall, only two of the 10 scheduled wedding ceremonies were held over the weekend, with the other eight couples postponing their big day at the last minute. A typical wedding ceremony would draw around 200 people, but the two held on Saturday had only about 50 each, according to wedding hall employee Park Ye Jin.

At both ceremonies, everyone except for the bride and groom were required to wear masks. “We didn’t let anyone enter the hall if they didn’t wear masks," Park said.

She said most guests left without eating any of the food set up at the banquet reception.

Ahn said that all of her planned gatherings of relatives and friends had been canceled, and that she recently skipped a funeral and just sent condolence money to the bereaved family. Lee said that even if a loved one of a close friend were to die, he wouldn't go to the funeral — an event he would feel obligated to attend in ordinary times.

Choe said her family canceled her father’s 70th birthday party, which was scheduled to take place at a Daegu restaurant this past Saturday with about 30 guests.

“We just had barbecues at home, and my father was very disappointed,” Choe said, adding that her family plans a more formal party for him at home later this week.